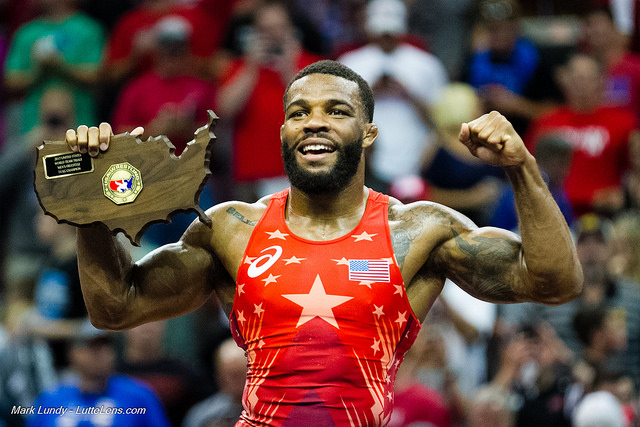 CORSIER-SUR-VEVEY (September 11) – United World Wrestling has announced seven new members of the organization’s Athletes Commission. The wrestlers were voted onto the commission by their fellow athletes at the 2017 Senior World Wrestling championships last month in Paris.

In the commission’s first act, four-time world champion and 2012 Olympic champion Jordan BURROUGHS was selected to chair the commission. Burroughs will be a voting member of the United World Wrestling bureau and replaces 2008 Olympic champion Carol HUYNH (CAN) who has served in the role since it was first established in 2013.

Jordan BURROUGHS (USA) — CHAIR: Burroughs recently claimed his fourth world title in freestyle at the 2017 World Championships in Paris. He was an Olympic champion at the 2012 Olympic Games in London.

Komeil GHASEMI (IRI): Ghasemi is a two-time Olympic medalist in freestyle, claiming bronze in 2012 and silver in 2016. He was also a world silver medalist in 2014.

Arsen JULFALAKYAN (ARM): Julfalakyan, a three-time Olympian in Greco-Roman, captured a silver medal at the 2012 Olympic Games in London. He has also been a four-time world medalist, winning a world title in 2014.

Sofia MATTSSON (SWE): Mattsson won an Olympic bronze medal at the 2016 Olympic Games in Rio de Janeiro. In addition, she has five world medals, including a world gold in 2009.

Mélonin NOUMONVI (FRA): Noumonvi is a two-time world medalist in Greco-Roman, winning a world title in 2014. He competed at the Olympic Games in 2008 and 2012.