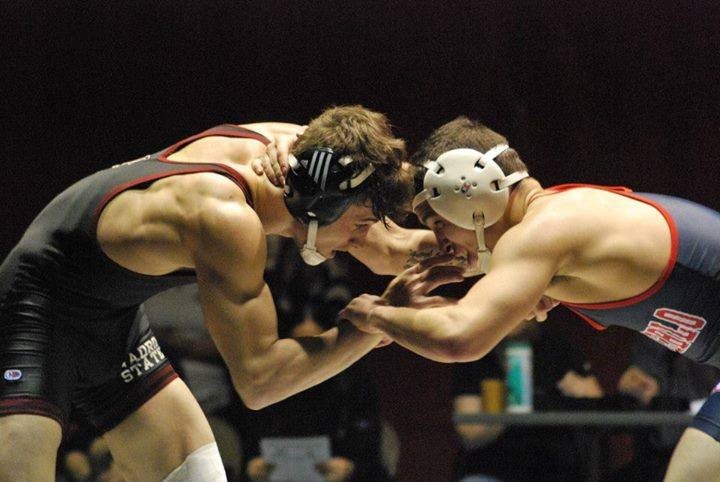 In November of 2015, the Eagles had already lost five wrestlers due to season ending injuries. Fast forward to November of 2016, and the team is healthy. “All of the guys who missed out on competing last year have been consistent and diligent in their rehab. They are ready to go this year,” said Head Coach Brett Hunter.

Hunter was pleased with his 2016 team’s 14-3 record in dual meets, but he felt that they peaked to early. “We lowered the amount of duals on our schedule from 17 to 10, which will decrease the number of weigh ins for our guys and keep them fresh,” commented Hunter. They added an open tournament at Wisconsin-Parkside in early December that will allow them to see teams from Wisconsin and Minnesota who they don’t usually see until the NCAA tournament. The Eagles will dual conference foe California Baptist University, who placed 6th at the 2016 NCAA tournament, at the Midwest Duals in Kearney.

When asked about this theme for this year’s team, Hunter explained that “our goals never change. This is our 2nd year having the RMAC Championships, and doing well in that tournament is a good measuring stick for how many guys we can qualify for NCAA’s.” To reach those goals, consistency in their training, academics, sleep, nutrition are the main areas they are focusing on. “We talk about being consistent in every aspect of their lives, and our guys have bought in and shown progress over the summer,” added Hunter.

Returning NCAA Qualifier Taylor Summers is the clear cut favorite to start at 133. He ended the season with a 26-9 record and will lead the team this season. “Taylor came out of a small class C high school in Nebraska and never won state title. He has understood the developmental process and has worked his butt off. He has been a big-time contributor to our program for 3 years now. Taylor will contend for a NCAA title this season, I truly believe it,” commented Hunter.

Three other weight classes also have clear cut favorites. Hunter expects Sean Glasgow, Jacob Anderson, and Chance Helmick to join Summers as top performers. Both Anderson and Helmick have moved up a weight class, have been consistent in all facets of training over the summer, and own five Nebraska state titles between them. Blue chip recruit Sean Glasgow redshirted at 157 last year, but will man the 149 spot.

Matt Kindler won two Nebraska state titles for Aquinas Catholic High School, and his continued progression has made him the front runner to start at 197. “Matt came from great program, he gets work in before and after practice, and takes care of business off the mat as well. He’s going to be very successful for us,” commented Hunter.

NOTE: Chadron State had the 11th best 2016 recruiting class in non-division I schools