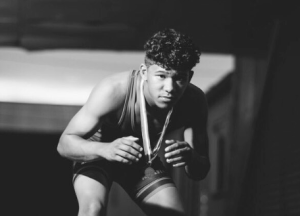 NEwrestle:  What were the deciding factors that led you to choose Chadron State College to continue your wrestling career?
Ben Rodriguez: I decided that Chadron State was the right place for me the moment I met Coach Hunter. Coach is a really cool guy and has nothing but the best interest in not only my wrestling career, but academically as well. Chadron is also really close to home and would be very convenient considering I’m really close with my family. Having my family at the home duals is going to be a great thing. The team also has a lot of familiar faces that will make calling CSC home a lot easier.

You had a 32-9 record entering the 2015 State tournament and won the bracket. What does that say about how tough Scottbluff’s regular season schedule?
Our schedule is brutal and i think that what makes our team so tough. My sophomore year, I faced an abdominal injury at the beginning of the season that forced me to sit out for a couple of tournaments, but I made it back for grinding part of our season. Trips to tough dual tournaments like Top of the Rockies in Colorado, and Rocky Welton in Garden City really help give the team looks at different competition. This year will be even tougher with the trip to Walsh Ironman in Ohio. The records of individuals on our team do not really reflect how tough we really are.

What are some of the challenges you have faced so far in your high school career?
Other than a couple of minor injuries, I have had pretty much smooth sailing. Some practices can be intense but I wouldn’t consider training hard a challenge. The year-round 2 a day practices definitely can be tough, but they really help prepare our team for big matches.

When you began your high school career, did you have goals to win more than one high school state championship?
I have always wanted to win a state title ever since i was young kid,and after i won my sophomore year, I knew one just wasn’t enough. I wont be satisfied unless I capture another title this year.

You have an opportunity to win your second state title this season, what do you need to focus on this season in order to do that?
I believe in order to win another state title, I believe I just have go hard day in and day out at practice, stay healthy, and just believe in myself. Wrestling is not only a physical sport but also it is very mental. Staying focused and having the mentality that I won’t lose is going to help me succeed in capturing another title.

What are your goals for your senior wrestling season?
Some goals for this season would have to be to reach the 150 career win mark, capture another state title, and to improve my placing at both Rocky Welton and Top of The Rockies tournaments. And of course I want to do whatever it takes to bring a team title back to Scottsbluff.
When your high school career is over, what words do you hope people use to describe the way you competed?
I just want people to view me as competitor that never gives up with a lot of heart.

Is there anyone you’d like to thank?
I would like to thank my long-time coach Brian Adams. Brian has coached me since I was about 5 years old, and has stuck with me. Brian has taught me all of my technique and has helped become the wrestler I am today.

One thought on “Ben Rodriguez commits to Chadron State College”