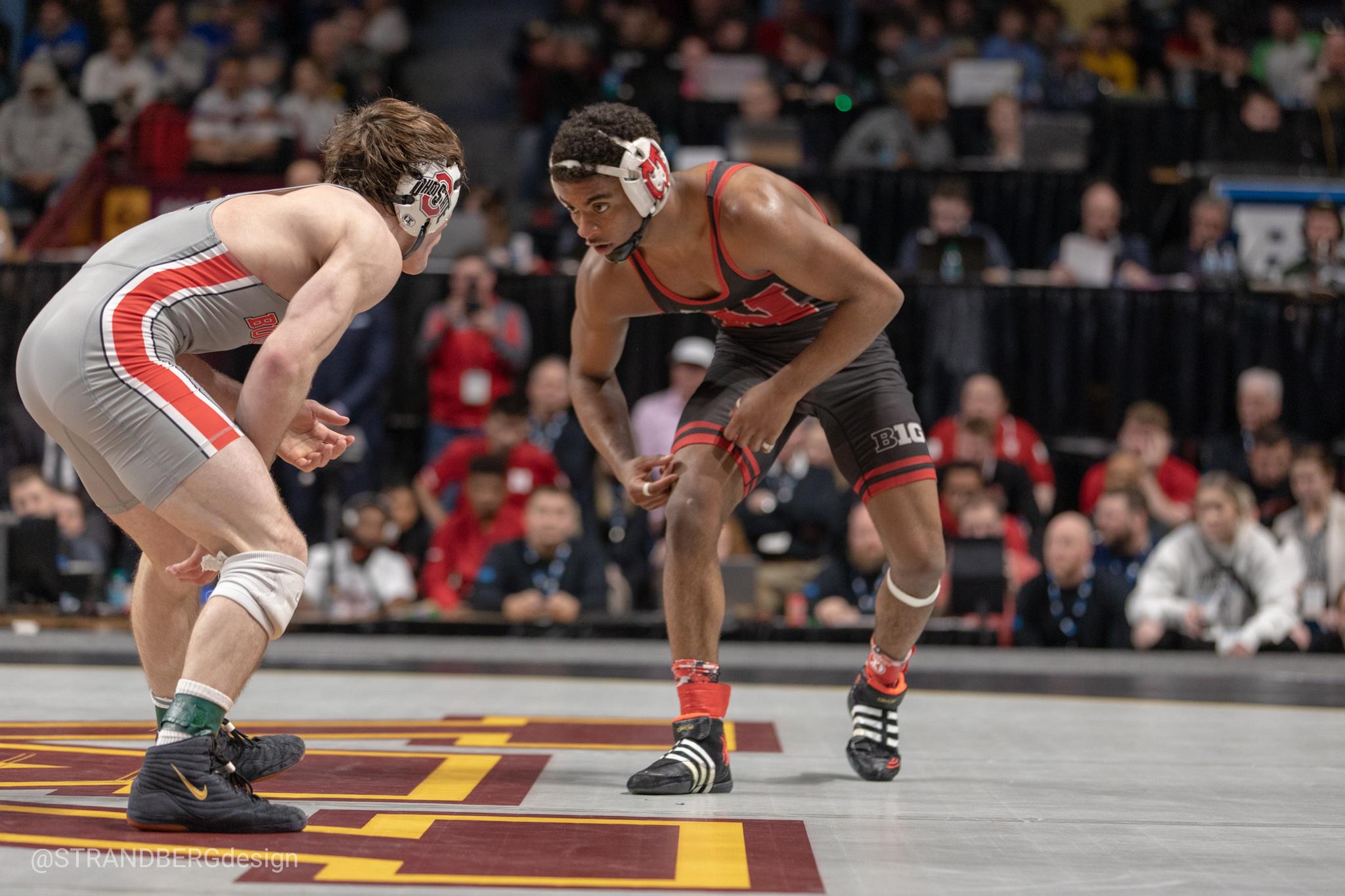 Nebraska scored 96.5 points over the course of the weekend. It was enough to put them in fifth place. Penn State ran away with the conference title with 157.5 points. They won four individual titles. Ohio state was the runner up with 122.5 points, getting titles from Joey McKenna and Miles Martin. Iowa, Minnesota, and the Huskers were in a tight battle for third place. The hawkeyes picked up a huge win with Alex Marinelli upending defending NCAA champion, Vincenzo Joseph to finish third with 107.5 points. Minnesota didn’t have any individual champions but was able to pick up points in wrestle backs by the bunches to finish fourth with 101.5 points. The Huskers had seven guys competing for medals on Sunday afternoon. They had two in the championship round, three in third place bouts, and two in fifth place matches. Huskers also had a ninth place finisher.

Starting out at 125 pounds, senior Zeke Moisey got out to a rough start and never rebounded. Moisey lost his opening round match, by way of a :20 fall, to fourth place finisher Elijah Oliver from Indiana. He received a bye in the first round consolations before a match up with Purdue sophomore, Devon Schroder. Moisey injured his shoulder during the match. He tried to fight through it, but was unable to compete at a hundred percent and dropped the match 10-4. Moisey will wait to see if he can get a wild card into the NCAA tournament.

Freshman 133 pounder, Jevon Parrish competed in his first Big Ten tournament. He lost his first two matches, to fourth seeded Roman Bravo-Young from Penn State and Paul Konrath from Indiana. His tournament was just beginning at the point. Parrish put together three straight victories in the ninth place bracket. He got revenge, and defeated Konrath in the first round. Then went on to defeat Michigan State senior, Anthony Tutolo and Wisconsin senior, Jens Lantz to finish ninth. With his ninth place finish, Parrish will now be the top seeded wildcard selection from the Big Ten.

Chad Red put together a massive weekend of wrestling for the Huskers. He got his weekend started off with a :47 fall of Rutgers junior, Pete Lipari. In the quarterfinals Red upset the top seed, Michael Carr from Illinois, 8-4. That set him up for a semifinals show down with Tristan Storr from Michigan. Red picked up nearly four minutes of ride time on his way to a 4-1 victory. In the finals, Red tried to defend a flurry of take down attempts from third seeded Joey McKenna, but ultimately came up short 9-2. Red is a returning All-American and will wait to see where he ends up in the NCAA tournament.

Jordan Shearer competed in likely his final match for the Huskers. It was reported during the Stanford duel that Shearer was going to forgo his senior season to start medical school in his home state of North Dakota. In his first round match, Shearer got down early to Pat Lugo from Iowa. He tried to mount a come back, but fell 9-5. In consolations, Shearer picked up a 2:42 fall of Purdue Freshman, Parker Filius. Shearer and Wisconsin junior, Cole Martin went back and forth before Martin got a take down in sudden victory to win 6-4. Shearer had a great season and looked to really be putting things together towards the end, but just came up a little bit short. We wish Jordan the best of luck with his future.

Senior Tyler Berger continued his success in the Big Ten tournament. He started out with a first round bye before taking down John VanBrill from Rutgers 11-5. In the semifinals, Berger defeated Minnesota senior Steve Bleise 6-3 to set up a rematch with Jason Nolf. In the finals, Nolf was to much for Berger as he won 12-4. It was Bergers third loss of the season and second to Nolf. Berger will now get ready for the NCAA tournament where he will likely be the two seed.

Isaiah white picked up points for Nebraska on his way to a fifth place finish. White entered the tournament one of the five top ten wrestlers at 165 from the Big Ten. He started his tournament with an 8-4 victory over Michigan State sophomore, Austin Hiles. That set him up for a match with Logan Massa from Michigan. White defeated Massa earlier in the season but was not able to repeat. Massa advanced to semifinals with a 8-6 victory. White went to consolations where he picked up back to back victories over Cole Wysocki from Purdue and Tyler Morland from Northwestern. In consolation semifinals, White got matched up with third ranked Evan Wick from Wisconsin. It was a low scoring match, Wick got an escape and ride out in tie breakers to defeat White 2-1. In the fifth place match, White wrestled Te’Shawn Cambell from Ohio State and was victorious 3-2. White should ride the momentum heading into the NCAA tournament.

Mikey Labriola entered the tournament having not lost since the Penn State duel. He started off the tournament with a :50 fall of Maryland senior, Josh Ugalde. In the quarterfinals Labriola wrestled Devin Stratzka from Minnesota, after getting down early, Labriola hit a bear late to tie the match and go to overtime. In overtime Stratzka put Labriola to his back to win by fall in 7:22. In consolations Labriola won three straight matches including upsetting the three seed Dylan Lydy from Purdue 4-3 in tie breakers. In the third place match up, Labriola got a rematch with Stratzka. Labriola got an early take down, but stratzka worked his way back to it 2-2. With :03 left in the third period Stratska got a take down to win 4-2. Labrola will be going to the NCAA tournament.

Taylor Venz got off to a very strong start in the tournament. The sophomore won his first match with a 1:52 fall of Brendan Devine from Northwestern. Venz continued the scoring in quarterfinals. He defeated Mason Reinhardt from Wisconsin by major decision 14-0. In semifinals, Venz got his first match up with returning All-American Shakur Rasheed from Penn State. It was a tightly contested match, but Rasheed got a point for ride time to win 6-5. In consolation semifinals, Venz got revenge on a loss from earlier in the season. Venz defeated Iowa junior Cash Wilcke 6-4 to advance to the third place match. In that match, Venz wrestled Illinois senior Emory Parker. Parker came after him from the start. He defeated Venz 5-1, and Venz got fourth. Venz will look to rebound when he heads to nationals.

Eric Schultz came into the tournament coming off two overtime losses. He didn’t show any side effects. In his first match he got 13 takedowns on his way to a second period tech fall (26-11) over Jake Kleimola from Indiana. Schultz continued rolling in the quarterfinals upsetting the four seed, Christian Brunner from Purdue, 4-3. In semifinals, Schultz ran into two time National Champion Bo Nickal. Nickal hit a couple early take downs to get out to a comfortable lead, on his way to a 10-4 victory. In consolation semifinals, Schultz got matched up with former Husker, Beau Breske. In the end, Schultz came away victorious 3-2. Schultz wrestled Jacob Warner from Iowa in the third place match. The match was tightly contested and went to overtime. In overtime Warner got a take down, to win, 7-5. Schultz waits now to see where he is seeded in the NCAA tournament.

Heavyweight, David Jensen, entered a loaded field that featured nine ranked wrestlers. Jensen got a bye in the first round, then wrestled Anthony Cassar from Penn State in quarterfinals. Cassar dominated a majority of the match on his way to an 8-4 victory. Jensen went to consolations where he defeated Rutgers’ Christian Colucci 4-0, and three seed Mason Parris from Michigan by fall In 3:22. In consolation semifinals, Jensen wrestled the four seed Trent Hilger from Wisconsin. The match went to tie breakers, where Hilger pulled out the victory 4-3. In the fifth place match, Jensen wrestled the sixth seeded Conan Jennings from Northwestern. Jensen did not finish the match, he exited in the second period with a medical forfeit.

The Huskers should have seven wrestlers going to the NCAA tournament, with two more waiting on wild card selections. Nebraska will head back to the wrestling room now to prepare for nationals. Last season, Nebraska finished in ninth place overall. They had three All-American last year in Tyler Berger, Chad Red, and Taylor Venz.