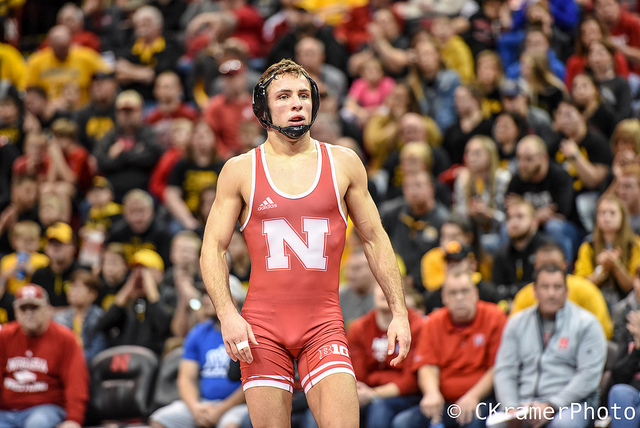 Nebraska was able to right the ship tonight at the Bob Devaney Sports Complex with a 21-18 win over a very tough Minnesota team, snapping the Gophers winning streak at five

The night began at 125 where #14 Zeke Moisey came out strong, building a 5-1 lead over #6 Sean Russell before ultimately falling at the 5:53 mark.

The true freshman at 133, Jevon Parrish, didn’t hold back against returning All American, Ethan Lizak, earning an early takedown over Lizak. The lead was short lived as Lizak went on a tear and earned the victory by technical fall over Parrish at the 6:47 mark.

At 141, Chad Red came out riding the high of his win over Iowa last week, but was unable to get the offense going and dropped a 9-2 decision to #9 Mitch McKee.

The tide began to turn for the Huskers at 149 when Jordan Shearer brought the home crowd to their feet. The Fargo, ND native flashed brilliance and earned a 10-2 major decision over #17 Tommy Thorn.

At 157, #2 Tyler Berger needed over time to put away #10 Steve Bleise 3-1, and made one of the more calm exits off of the mat that you’ll typically see from Berger.

#6 Isaiah White was a man on a mission jumping out early and not looking back. A 13-5 major decision over Carson Brolsma took a big bite out of the Minnesota lead and put Nebraska in a good situation to win the dual.

The 184 match saw #4 Taylor Venz bounce back from a tough loss last week, as he dominated Minnesota’s Brandon Crone earning a 7-0 decision.

The match up at 197 featured #11 Eric Schultz using a late flurry of take downs to earn a 14-5 major decision over Dylan Anderson thus locking up a dual win for the Huskers and sending the home crowd to their feet.

With the victory squared away, the crowd returned to their seats as the prolific Gable Steveson came to the mat. David Jensen and his newly earned #10 ranking made a valiant effort, although dropped a 13-5 major decision to #1 Steveson.

The Husker grapplers return to action Sunday, February 17 when they visit the Ohio State Buckeyes at 1pm. Be sure to catch the action as Taylor Venz vs. Myles Martin is sure to be a good one.