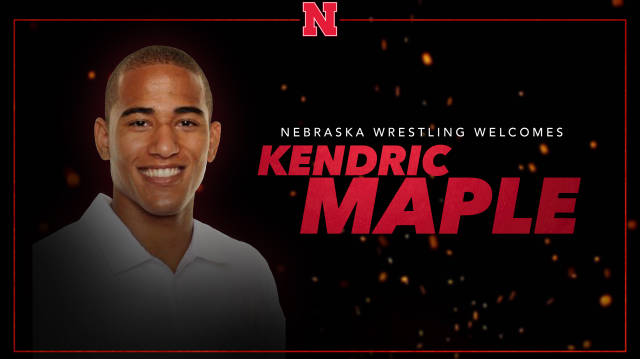 The University of Nebraska’s head wrestling coach Mark Manning announced the hiring of Kendric Maple as an assistant coach on Friday.

“We’re extremely excited to have Kendric, (his wife) Jordin and (his son) Kiner join our program,” Manning said. “Kendric comes to us as a highly accomplished wrestler on the mat and a man of high character off the mat. He will be very impactful to our program and will add to the excellence that we have established here.”

Maple is a two-time U.S. Open Men’s Freestyle finalist (61 kg), winning the title in April 2017. He was also a finalist in the 61kg at the 2017 U.S. World Team Trials and is currently ranked No. 2 in the country at that weight. He was the runner-up in 2015, which qualified him for the U.S. Freestyle World Team Trials, where he finished in the top three to earn a spot on the 2015 U.S. World Team.

“I’m really excited to join the Nebraska wrestling program,” Maple said. “My family and I enjoyed our time at Purdue, but we are really excited for our future at Nebraska. I feel I’m ready for this opportunity and I can’t wait to begin working with the student-athletes.”

Maple comes to Nebraska after spending one year at Purdue as an assistant coach, where he helped lead three Boilermakers to the 2017 NCAA Championships.

Prior to joining the Purdue staff, Maple was a volunteer assistant coach at his alma mater, Oklahoma. During his two seasons on staff, Maple coached friend and former teammate Cody Brewer to the 133-pound title at the 2015 NCAA Championships. In 2016, Maple helped Brewer claim his fourth All-America honor with a third-place finish at 133 pounds at the NCAA Championships. Maple also played a key role in Ryan Millhof’s 2016 Big 12 title run and All-America finish at 125 pounds.

As an athlete for the Sooners (2009-14), Maple became one of the most successful grapplers in program history, grabbing three All-America awards and owning a 127-25 (.836) record. His 127 wins rank sixth all-time at Oklahoma.

Maple concluded his 2012-13 season by claiming the 141-pound NCAA title and finishing a perfect 31-0. The following year, after moving to 149 pounds, Maple became OU’s 25th three-time All-American after placing eighth at the NCAA Championships. He took fourth in 141 pounds in 2012.

Originally from Wichita, Kan., Maple received his master’s degree in adult and higher education, with an emphasis in intercollegiate athletic administration from Oklahoma in May 2015. He earned his bachelor’s degree from OU in health and exercise science in May 2013. He and his wife, Jordin, have one son, Kiner.