Burroughs, Green Selected to Complete at Beat The Streets on May 17 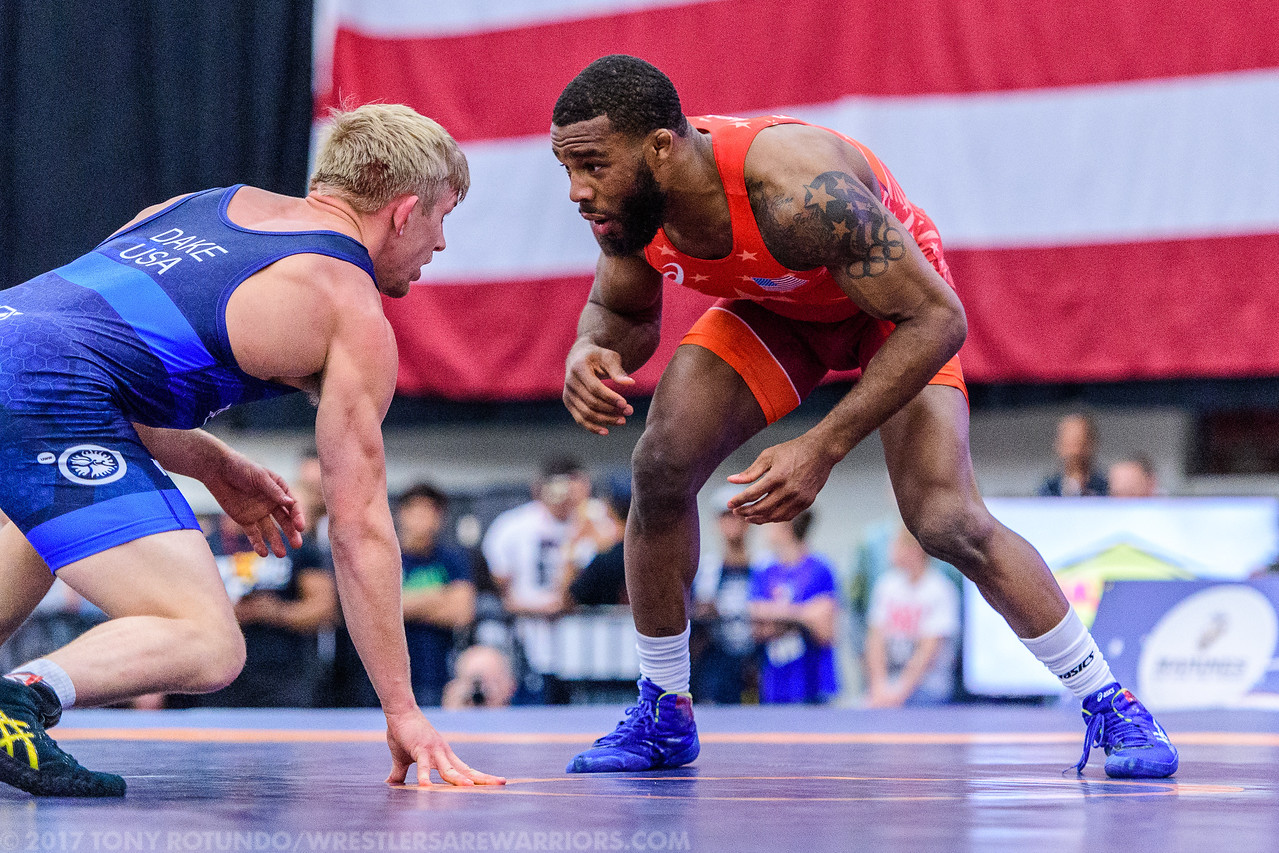 He is a two-time NCAA champion and one-time runner-up for Ohio State, with his senior year with the Buckeyes still ahead of him. Snyder was a 2013 Junior World Champion, as well as a 2014 Junior World bronze medalist.

Snyder has a 1-1 record in previous Beat the Streets Benefits, with a win over World medalist Javier Cortina of Cuba in 2014 and a loss to Olympic and World champion Khadjimurad Gatsalov of Russia in 2013. Snyder will face Katsutoshi Kanazawa of Japan this year.

Burroughs has added three World gold medals to go along with his Olympic gold medal from the 2012 London Olympic Games. He won World titles in 2011, 2013 and 2015, and was also a 2014 World bronze medalist. Burroughs also competed in the 2016 Olympic Games.

He was a two-time NCAA champion for Nebraska, and won the 2011 Dan Hodge Trophy as the nation’s top college wrestler. A native of Sicklerville, N.J., he was also a 2006 New Jersey high school state champion.

Burroughs, who is a perfect 6-0 in previous Beat the Streets Benefits, will compete in one of the most anticipated showdowns this year against 2014 World silver medalist and two-time Olympian Sohsuke Takatani, the most successful athlete on Japan’s roster.

Burroughs is among five 2017 U.S. Open champions who will compete against Japan in the Beat the Streets Benefit, after capturing national titles in Las Vegas on April 29. The other U.S. Open champions in the lineup are Ramos, Green, Taylor and Gwiazdowski.

Green, a 2015 World bronze medalist and 2016 World Team member, was a 2016 World Cup champion. He was a four-time All-American for Nebraska. A native of Willingboro, N.J., he was a New Jersey state high school champion. Competing in his first Beat the Streets Gala, Green’s opponent from Japan is Nobuyoshi Takojima, who was fifth in the 2015 World Championships.

Ramos, a two-time World Team member for Team USA, won his second U.S. Open title last week. He was second in the 2016 U.S. Olympic Team Trials. Ramos lost his only previous Beat the Steets Benefit match in 2015 to Yowlys Bonne of Cuba. He was an NCAA champion for Iowa. This year, he faces 2011 Cadet World medalist Rinya Nakamura in Times Square.

Taylor won his second career U.S. Open title this season. He was a 2013 University World bronze medalist, and boasts international gold medals in events in Spain and France. He has a perfect 3-0 record in previous Beat the Streets Benefits, with wins over Livan Lopez of Cuba in 2015, Yabrail Hasanov of Azerbaijan in 2014 and Magomed Kurbanaliev of Russia in 2013. Taylor won two NCAA titles and two Dan Hodge Trophies and was a four-time NCAA finalist for Penn State. His opponent from Japan is Takahiro Murayama.

Gwiazdowski is the only native New Yorker on the 2017 Beat the Streets team, having won two New York state titles for Duanesburg High School. He won the Bill Farrell International in New York City in November 2016. Gwiazdowski was a two-time NCAA champion and three-time finalist for NC State, and won his first All-American honor for Binghamton Univ. Making his Beat the Steets debut, Gwiazdowski will face Katsutoshi Kanazawa in Times Square.

Retherford was third in the 2017 U.S. Open at 65 kg/143 lbs., and also third at the 2016 U.S. Olympic Team Trials. A two-time NCAA champion and three-time All-American for Penn State, Retherford won the 2017 Dan Hodge Trophy. He was also a 2012 Cadet World champion in freestyle. Competing in his first Beat the Streets Benefit, Retherford will battle 2014 Junior World bronze medalist Daichi Takatani.

Stieber was a 2011 Junior World silver medalist. He won four NCAA titles for Ohio State, and was a 2015 Dan Hodge Trophy winner. Stieber, with a 2-1 record in previous Beat the Street Benefits, will battle Shinjo Arimoto, a 2016 World Team member for Japan.

Oliver was second in the U.S. World Team Trials in 2014, 2015 and 2016, and boasts gold medals at the Bill Farrell International and the Dave Schultz Memorial International. He won two NCAA titles for Oklahoma State. Chamizo was a 2015 and 2016 European Champion and was second in the 2015 European Games. He started his career in Cuba, where he was a 2010 World bronze medalist before emigrating to Italy.

About Beat the Streets

The mission of Beat the Streets is to develop the full potential of the urban youth and to strengthen the culture of New York City wrestling. BTS works directly with the New York City Department of Education in a public-private partnership to bring the life changing sport of wrestling to over 3,000 New York City student-athletes to help them achieve their personal and athletic goals. Through the operation of wrestling programs in middle and high schools in the five boroughs, BTS and the DOE provide a safe, positive atmosphere in which disadvantaged and at-risk youth can learn the essential life lessons of grit, personal responsibility and teamwork, physical fitness and nutrition, and life-long learning. The goal of fostering strong, well-rounded student-athletes is delivered through coaching, after-school programs, life skills workshops, and summer camps. More information can be found at http://www.btsny.org.

USA Wrestling is the National Governing Body for the Sport of Wrestling in the United States and, as such, is its representative to the United States Olympic Committee and United World Wrestling, the international wrestling federation. Simply, USA Wrestling is the central organization that coordinates amateur wrestling programs in the nation and works to create interest and participation in these programs. It has over 220,000 members across the nation, boys and girls, men and women of all ages, representing all levels of the sport. Its president is Bruce Baumgartner, and its Executive Director is Rich Bender. More information can be found at TheMat.com