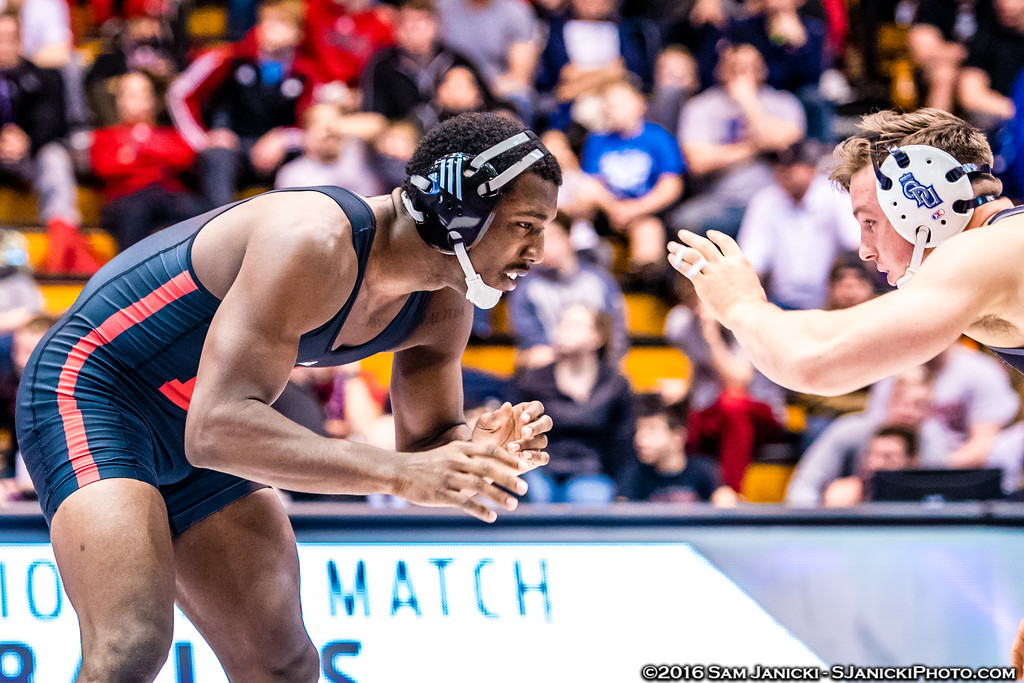 Three matchups in today’s dual between #2 Penn State and #6 Nebraska will feature wrestlers ranked in the top 5. According to rankings released by Trackwrestling.com on 1/04/17, Penn State is favored in two of those three matches. Up to four additional matches could feature wrestlers ranked in the top 20. TJ Dudley earned his 100th career win in the finals of the Midlands Championship, and fellow senior and Midlands champion Eric Montoya has the opportunity to earn his 100th caree win today.

125- #5 Tim Lambert vs #3 Nick Suriano
This matchup pits two competitors who have smothering styles. The slight difference, is true freshman Nick Suriano starts a little bit faster in his matches. Like Lambert, he stays in great position and is proficient at attacking when his opponent’s defense is compromised. Suriano hasn’t had much trouble getting off bottom this season, but Lambert is a seasoned senior who has the ability to not only hold opponents down, but to earn nearfall points from the top position.

Keys to Victory:
Weathering Suriano’s early storm and winning the battle on the the mat.

157- #3 Tyler Berger vs #1 Jason Nolf
Berger is sure to bring piss and vinegar to this match, as he is fresh off a controversial loss in the Midlands finals. There’s added motivation for Berger to bring the heat, because Nolf won their sole meeting last year by technical fall. Returning NCAA finalist Nolf throws down a suicide pace with his handfighting and motion in the neutral position, while Berger is able to hold position and pick apart opponents who get too aggressive. Nolf uses an overtie snap to wear on his opponent’s head and neck, but periodically leaves his ankles exposed.

Keys to Victory:
Like his teammate Dudley, Berger needs to matching the Nittany Lion’s pace and be efficient when he attacks.

184- #2 TJ Dudley vs #3 Bo Nickal
Nickal and Dudley finished as NCAA runner-ups last season at 174 and 184 respectively, and are both a big part of why 184 is arguably the deepest weight in the nation. Wrestling fans will be entertained by an explosive display of attacking and acrobatics in this battle of similar styles. Nickal’s signature tie in the neutral position is the underhook, and when he secures the position, he uses fakes and snaps to set up a knee pick that allows him to use his deceptively long arms effectively. Dudley uses a slide by to open up the majority of his takedown attempts. He does have a fireman’s from an overhook in his arsenal that could be useful as Nickal will surely chase the underhoook position. Both wrestlers are dangerous scramblers who can cradle opponents from every position. Nickal exemplifies Penn State’s mentality of continuously attacking and scores hordes of points, while Dudley has a slightly lower volume of attacks that are just as deadly.

Key to Victory:
Dudley needs to match Nickal’s pace while being efficient with his attacks.