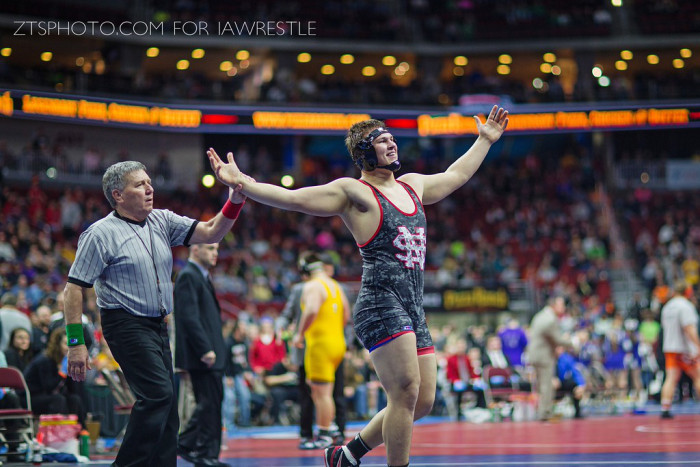 The University of Nebraska continues their recruiting momentum in the class of 2017 picking up another out of state recruit- this time their neighbor to the west – in Iowa’s Wyatt Wriedt. The North Scott high school star is both a standout in football and wrestling for the Lancers, but in the end picked Mark Manning and the Husker wrestling program for his future.

I am proud to announce that I will be attending the University of Nebraska as a student athlete! pic.twitter.com/8ZBOvKYOK3

Wriedt has had a meteoric rise over the last two years, though many remember his 2016 state finals victory over Southeast Polk’s Ethan Andersen (now at Oklahoma State) as the moment that put him on the map. The truth is Wriedt was emerging as a Division I prospect long before that win, as evidence by his 2015 fourth place finish at Cadet freestyle nationals in Fargo, North Dakota. Since his 2015 Fargo placing and win over Andersen, Wriedt has moved to #14 overall at 220 pounds by Flowrestling, but more importantly he is ranked #85 overall in the class of 2017.

Wriedt has long been a standout for North Scott on the gridiron as well as the mat. As a junior Wriedt earned all-state offensive lineman honors and he was also one of his team’s top leading tacklers. Of course he has the wrestling credentials as well – taking third (up at heavyweight) as a sophomore.

Looking forward to Nebraska, Wriedt joins a recruiting class that features two top 50 recruits in Mikey Labriola (Pennsylvania) and Jason Renteria (Illinois). He will project at heavyweight for the Huskers.