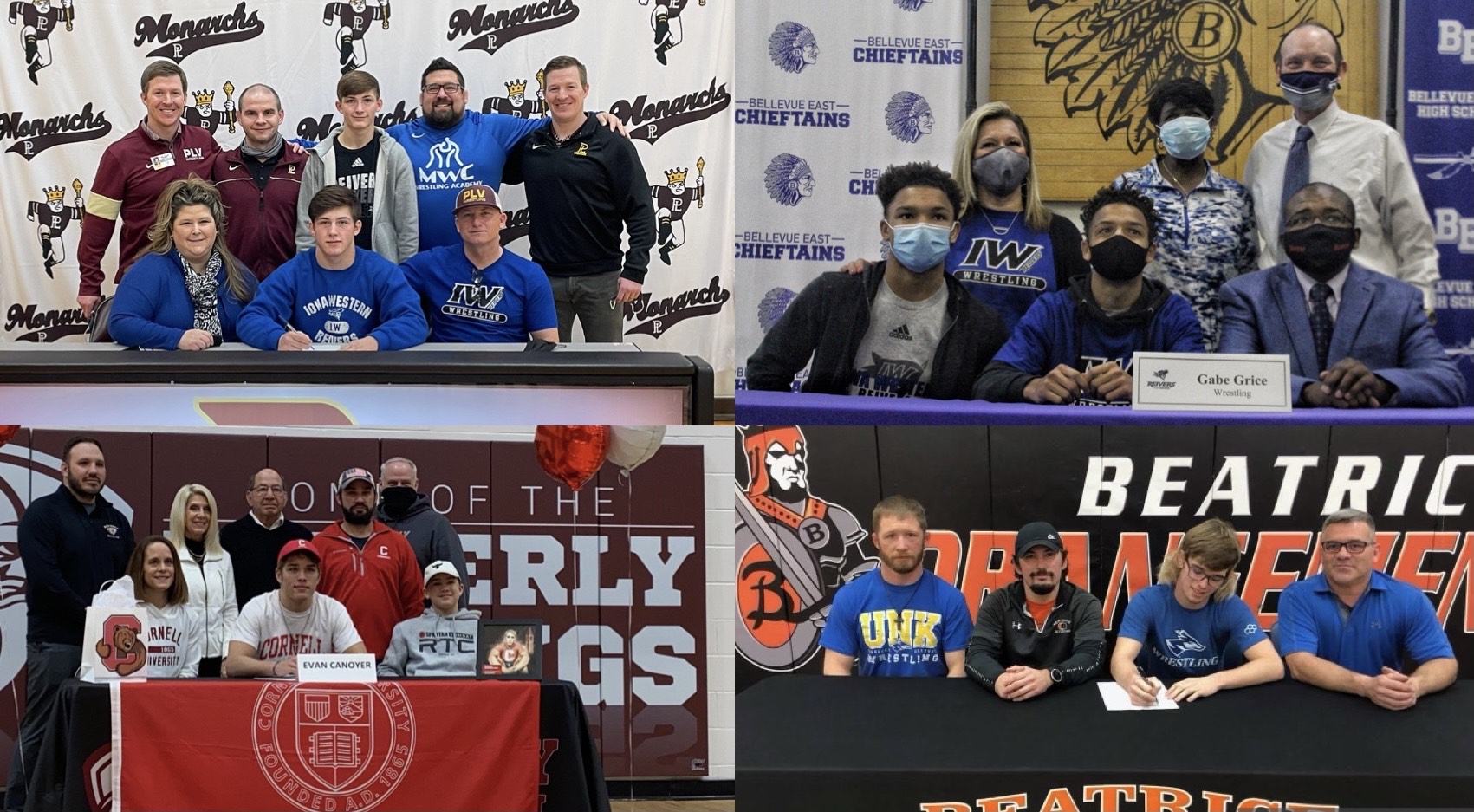 3x medalist, 2x finalist and State Champion Evan Canoyer of Waverly has signed on to wrestle for NCAA Division 1 Cornell. Cornell is one of the top D1 programs in the country. They’ve finished in the top ten at the NCAA Tournament every year since 2007. He’ll join Kearney native Philip Moomey who is also on the Big Red’s roster. Evan joins a growing list of wrestlers from MWC to sign on with D1 colleges including fellow 2021 graduates Conor Knopick (Iowa State), Dyson Kunz (Northern Colorado) and Caleb Coyle (Oregon State). Canoyer was a double Fargo All-American in 2019.

Canoyer and Price are teammates at MWC. While teammates in the offseason, they actually squared off once this season with Price breaking a third period tie to get the win. They are both currently ranked #1 in A and B respectively.

3x medalist, 2x finalist and 2019 State Champion Gabe Grice of Bellevue East will join Cole at Iowa Western. Grice burst onto the scene as a freshman finishing runner-up in OT to Paul Garcia. As a sophomore he was a state champion and his junior season he was essentially up two weight classes and still medaled at 132. This season at 120 he’s part of an awesome trio of wrestlers vying for a state title. Gabe along with Cole Price will add to an Iowa Western roster loaded with Nebraska talent. Gabe’s brother Garrett recently committed to Virginia.

3x State Medalist Drew Arnold of Beatrice signed on to wrestle at UNK. He joins 13 other Nebraskans including Evan Canoyer’s brother Kaleb on the Loper roster. Since 2001 the UNK wrestling team has finished in the top ten EVERY YEAR. The Lopers won National Titles in 2008, 2012 and 2013. Drew is two time USA Preseason Nationals All-American and is ranked #1 at 132 in Class B this season.

Congratulations to these wrestlers and all of the wrestlers who signed on to compete at the next level, whether it be on the mat or in another sport. The state of NE will be rooting for you!

One thought on “Nebraska Senior Standouts Make it Official”