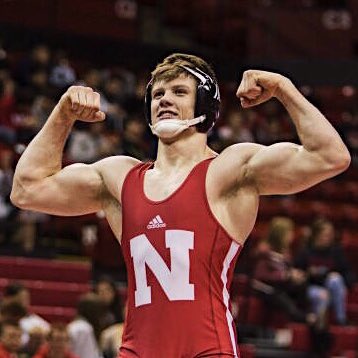 After 306 long and puzzling days, the Husker grapplers are ready to return to action. Lead by 6 returning All Americans, the Huskers look to continue their winning ways in dominant fashion and achieve the program’s highest finishing at the NCAA Championships since the Burroughs-led ’08-’09 squad finished 4th. It should also be noted that winter sport athletes were granted an additional year of eligibility by the NCAA so everyone could have the pleasure of watching this squad for another season yet. They have the pieces in place, so let’s take a look at how it will be done.

The 2020 NCAA Qualifier and Indiana transfer, Liam Cronin, enters the mix at 125 coming off of a 5thplace finish at last year’s Big 10’s.  With 41 collegiate victories under his belt, he’s been a welcome addition to the team and looks to build off of last year’s success.

Coming off of a 13-win freshman campaign, Alex Thomsen moves up to the 133 weight class.  The Neola native ended last year on a high note by becoming an NCAA qualifier.  Thomsen continued his winning ways by capturing Greco gold at the U.S. Senior National Championships in dominant fashion.  Coming in as the 9-seed at 60 kilos, Thomsen scored early and often leaving with a 4-0 record and some impressive hardware.

Enter the logjam at 141 and 149.  The #5 ranked senior at 141, Chad Red, looks to remain the staple at his respectable weight.  His resume is full of accolades including but not limited to; 3x NCAA qualifier, 2x All American, 67 career wins (31 bonus point wins), and a multitude of wins over ranked opponents.  Next, you look to the uber talented sophomore, Ridge Lovett.  The Post Falls, ID native and Honor Roll student put the entire NCAA on notice by entering the picture.  Lovett took the country by storm as he rolled to a 17-8 record in his true freshman campaign.  It should also be noted that 6 of his 8 losses were to, at the time, highly nationally ranked wrestlers (#9 Sammy Alvarez, #8 Montorie Bridges, #3 Roman Bravo-Young, twice to #2 Austin DeSanto, and #1 Seth Gross).  However, recognizing Lovett this year may require a double take.  The lanky 133 lb Freshman from last season is up in weight, and continued his tear during the offseason winning the UWW Junior Freestyle National Title at 61 kg.  The few in attendance for Nationals in Omaha this past fall witnessed Lovett win 6 matches, 1 by pin, and 4 by tech fall on his way to the title.  Then, you go the highly touted recruit from the class of 2019, Kevon Davenport.  He made his way to Nebraska by way of Pontiac, MI as the FloWrestling #22 overall prospect in his class with a mile-long list of wrestling accomplishments. He was a 4x Michigan state champ, a 3rd place finisher at the Cadet World Team Trials along with winning the 2017 Cadet Fargo Greco Championship.  His freshman season at Nebraska ended with an 18-4 record, 14 of those coming by bonus points.  For those of you that aren’t familiar with Kevon just yet, he can spotted as the premier hype man from the Nebraska bench last season.  This season, expect to see most of his celebrating being done on the mat.  Last but certainly not least, Brock Hardy enters the picture.  Hardy is coming in off of serving a 2-year LDS mission in Brazil with a very highly decorated wrestling background.  Along with being a 4x Utah state champion, Hardy also was a 5x 1stplace finisher at USA Folkstyle nationals.  In conclusion, there isn’t a bad choice that Coach Manning can make at 141 or 149.

At 157, the product of Norfolk, NE, Caleb Licking appears to have taken the reins after competing at 149 last season.  On top of a highly decorated prep career, Licking brings 28 varsity wins to the table with 17 of those taking place last season.  Licking will score early and often as well with 7 of last years wins coming with bonus points.

The 165 lb weight class had been in good hands over the last few seasons by the All American, Isaiah White.  Who better to take over than Peyton Robb up from 157.  Last season, Robb cruised to a 16-5 record with 10 of those wins by bonus points.  Robb finished 3rd in the Big Tens last year by taking out 4 ranked wrestlers, one of them being over #2 Kaleb Young of Iowa in the quarterfinal match.  Robb is used to winning on the big stage and should make some noise in this buzzsaw of a weight class.

The next three weight classes have been on lockdown by a trio of familiar faces.  Mikey Labriola comes in with a #3 ranking and an unmatched intensity on the mat.  After making a fairly seamless transition to Nebraska from the heralded Bethlehem Catholic High School, Labriola has worked his way to 50 varsity wins in a Husker singlet with 29 of those wins being by bonus points. The 2x All American will be a force to be reckoned with this season as he only trails Iowa’s Michael Kemerer and Michigan’s Logan Massa in the rankings.  Simply put, Labriola on the mat is must watch wrestling.  Moving to 184, Taylor Venz comes in as the #6 ranked wrestler in an absolutely stacked weight class.  Backed by being a 3x NCAA qualifier and 2x All American, Venz will have no issue asserting his dominance amongst the ranks.  If you were to search the term “Bonus Points” you would undoubtedly see a picture of the Farmington, MN native.  Of his 73 varsity wins, an impressive 43 of them have come by bonus point.  Venz will not only beat his opponents, he will more than likely put them on their back.  Wrapping up the Surefire Trio, is the #3 ranked senior, Eric Schultz.  Schultz has systematically dismantled the competition in his weight class since putting the N on his chest.  He is a 3x NCAA Qualifier, a 2020 All American, and has 66 varsity wins all while going head to head with some of the best 197 lb wrestlers in recent memory (Bo Nickal, Kollin Moore, and Willie Micklus).  Schultz has the background and all of the necessary tools to have a legitimate shot and being Nebraska’s first National Champion since Jordan Burroughs won his 2nd title in 2011.

Finally, we have two big men that both have the potential to make a splash in the 285 lb weight class.  The Senior, Christian Lance, has 18 varsity wins since transferring from Fort Hays State where he won 51 matches in three seasons.  Lance was nearly interchangeable last season with David Jensen as he won his bracket at the Journeymen Collegiate Classic and was very effective in duals.  Cale Davidson enters his 2nd season with the Huskers after wrestling for three seasons at Wyoming where he collected 26 wins, two of them being over ranked opponents.  As a Husker, Davidson has a 6-2 record with 1 pin, 1 tech fall, and 1 major decision.  Nebraska should be in a good spot with either of these men in the lineup.