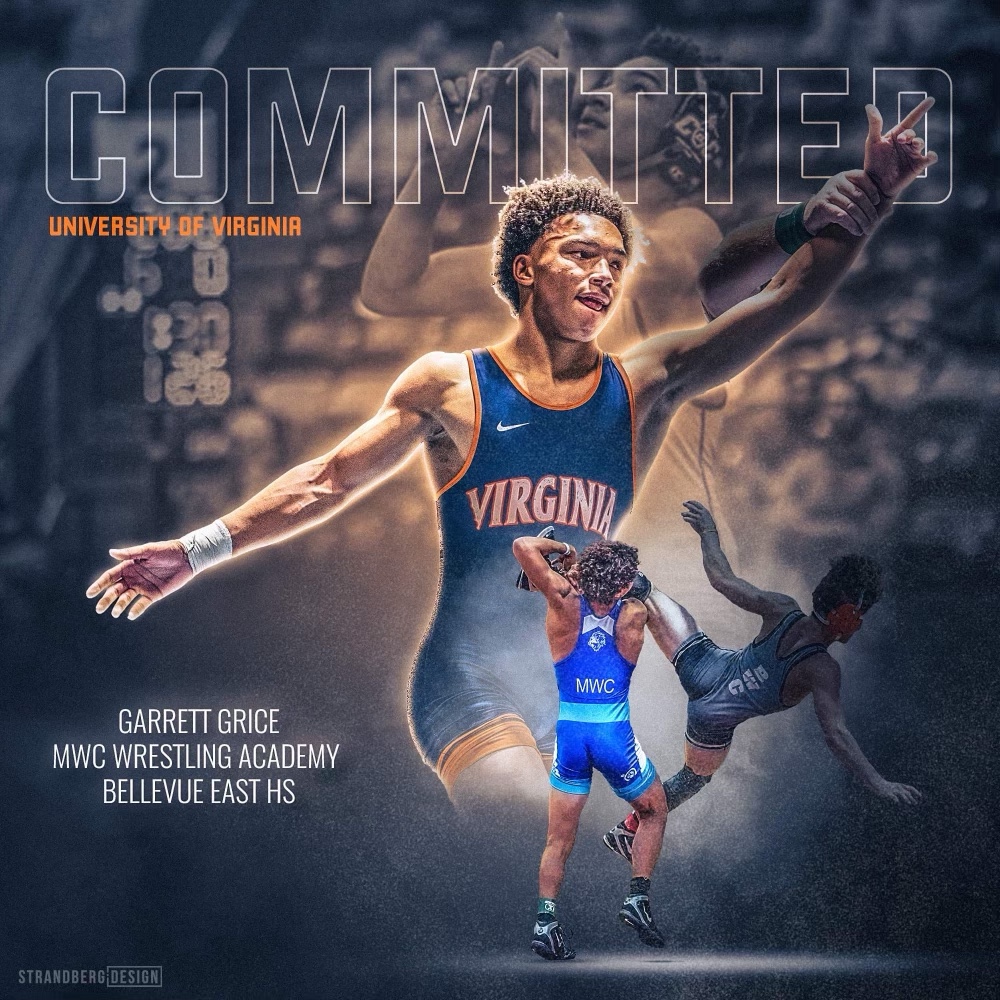 Garrett Grice, our pound for pound top wrestler in the Class of 2022 made his announcement Sunday on NEWrestle Instagram and Twitter. He was choosing between Nebraska, NC State, Northern Colorado, and Virginia. He Could have joined MWC Teammates Antrell Tayor at Nebraska, Dyson Kunz at Northern Colorado, or Isaac Trumble at NC State. He chose to forge his own path. Grice was a sixth place finisher at Fargo Freestyle in 2019. He is a two time state champion on pace to become a four time state champ. He has wrestled in numerous events including Virginia Beach, Elite 8 Duals and Super 32’s.

Grice is a Junior at Bellevue East where he has an overall record of 118-1 to this point in his career with his lone loss coming to current Oklahoma State freshman, Jakason Burks. On Saturday, Garrett broke the All Class record for career takedowns at 767. The Junior will be real close to 1,000 by the time his career is over. Grice has spent most of his career wrestling for MWC. They have put him on a national scale, showcasing his abilities and talent. Garrett’s wrestling has earned him a ranking as high as #11 in the country by track wrestling. He is also been ranked by Matscouts and FloWrestling. Garrett is currently ranked #62 on MatScouts 2022 big board.

Garretts number one priority is academics. He chose Virginia because of the coaching staff and academic prestige. Garrett will pursue a degree in Business at Virginia. He will be wrestling 133 pounds and has a chance to compete real early in his college career.

Garrett epitomizes everything good about the sport of wrestling. He’s a tremendous wrestler, a tremendous teammate, and a tremendous person. He exudes class and charisma. His wrestling IQ is unbelievable, as is his character. I have said many times, there is not a kid in the state of Nebraska I would draft ahead of him. Him wrestling for me at East has been one of my greatest blessings as a coach. Anyone whos knows Garrett knows what I mean. As one of the faces of Nebraska High School Wrestling right now, he is a tremendous ambassodor for this entire state, pure class. -Todd Porter (Bellevue East Wrestling Coach)

Garrett exemplifies what a coach wants. He is disciplined, loyal and most of all, he is coachable. He will make any room he is in, better. MWac is proud and honored to have him in the room. -Zac Dominguez (MWC)