Talmadge already a record holder, is hungry for more. 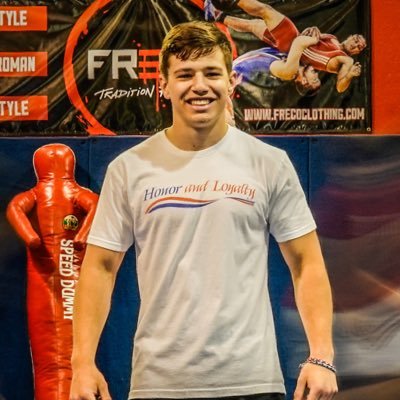 Ralston senior, Noah Talmadge will enter this season trying to become the first Ralston state champion since 2013. He is coming off a 45-4 junior season that saw him finish in third place at 145 pounds in Class B. He also broke school records for season wins and takedowns last season. He went 30-13 as a sophomore, and as a freshman, he was 36-8 finishing in fifth. If there is a full season this year, Talmadge is on pace break school records for career wins, takedowns, and career points. He will certainly have a lot of eyes on him this season.

Noah started wrestling when he was six years old. He wrestled for Ralston Youth Club. A couple years later while playing football for Papillion, he learned about MWC and started training with them. He has been there ever since. He competes in all three styles of wrestling. as far as his favorite he says “Freestyle is my favorite, it used to be Greco but as the years have gone by, I really enjoy freestyle wrestling a lot more.” He has wrestled in many tournaments across the country at all levels, as far as his favorite place he has wrestled outside of Nebraska, he says “Fargo, its a fun experience and I get to wrestle with the best wrestlers from our state.”

Last season was his best so far in his career. He dominated on the mat and really started turning a lot of heads. After a win over the top ranked wrestler in the first round, he found himself in a defensive battle in his next match. Despite many attacks and scrambles, he came up short 1-0 to the eventual state champion, Brady Fago. Talmadge would battle his way back through the consolation bracket to a third place finish. For a lot of people that 1-0 match would be demoralizing. He dug deep, and showed his mental toughness to put that match behind him and continue to forge on. He doesn’t use that match as motivation, he says “I don’t know if it drives me as much as teaches me just to not make the same mistakes. it only changes the situation after a loss.” He is a student of the game, learns from his mistakes, and moves on.

Getting to move on this year has been a little more difficult with covid. Not knowing what the future holds and having to stay home has affected a lot of kids. Talmadge has made the best of his circumstances, before the quarantine hit, he joined Ralston’s golf team. “It started as kind of a joke, then the quarantine happened and I stuck with it and really have enjoyed golfing. I will be golfing again this year after wrestling season” he said. He enjoyed it so much so that he got a job over the summer working at a golf course. He also spent a lot of time this summer working out. Getting back to school this year he said “The masks haven’t been to bad. We go to school every other day and we haven’t had an outbreak yet.” hopefully that trend will continue as we head into the wrestling season.

Ralston will have a solid team returning from last season. They finished seventh in points at the state tournament. They return all there state qualifiers and four state placers; Cayden Corcoran, Jeremy McKee (4th), Michael Mass (2nd), Talmadge (3rd), and David Hernandez (3rd). Talmadge said that one of his goals this season is for Ralston to finish in the top three. what does he think they will need to do to get there? “I think we have to have one or two guys win a state title. We have been getting in the weight room. It will help we get Miguel James back who was out last year with an injury.” Being a senior this season, Talmadge will be looked upon as a leader. It is something he won’t take for granted. “I want to push everyone to get better. Get in the weight room now, so when the season comes along we’re not behind. We have to capitalize throughout the season” he said. In a season as wide open as this year in Class B, Ralston will be a team to keep your eyes on.

Noah will have an important decision coming up as to where he will be attending college. He has heard from Northern State, Colorado School of mines, and the Military Academies. He wants to major in Civil Engineering. He is also looking for the right fit. “I want to go somewhere with great facilities. I want friendly coaches who are not afraid to push you.” Where ever he ends up, they will be getting a talented wrestler who has a great mental and physical make up. He works hard in class, on the mat, and in the weight room.

There will be lots of great wrestlers in Class B this year, and Talmadge will be right there with them. He will wrestle at 152-160. He wrestled in July at the Legends of Gold duals, and plans to wrestle at Fall Brawl and Pre Season Nationals. They will be good tune up opportunities before the season starts. He also has benefitted from great practice partners at Ralston and at MWC. He does have two in mind who have been the toughest. “When we’re drilling it has been Maxx Mayfield and when we are going live its either been Maxx or Antrell Taylor.” Wrestling for almost 12 years he has had a lot of memories along the way. His favorite was getting to compete with MWC at UWW World Team Trials. On the mat or in classroom Talmadge brings a lot of character and precision. He is a high energy wrestler with great scrambling abilities. It will be a big senior season for Ralston, Noah, and the record books.