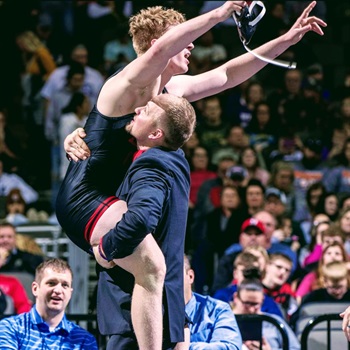 Dylan got into wrestling at a very young age. His cousin wrestled, and when he was in pre-school his parents took him up to the David City little kids meet. The following year, he joined David City and started wrestling and has never looked back. He is also an accomplished football player. He was a starting safety as a sophomore, racking up 50 tackles on the season. His junior year, he moved to Middle Linebacker and Quarterback. He had 464 passing yards, 345 rushing yards and 12 touchdowns. He also added 64 tackles on defense. His team went 4-5, but Dylan believes this year, with the returning experience, David City could make a playoff push.

When it came to wrestling, Vodicka found a niche in the lineup as a freshman. In his first year of high school he made the varsity squad. He went 36-16 on his way to a 6th place finish at stage. He moved up a weight class to 160 his sophomore year, and made his first state finals appearance. He finished 2nd, and amassed a 43-8 record. Junior year, Vodicka again went up another class to 170. He entered the season ranked atop the weight and never looked back. He was a man on a mission, posting a 49-3 record and winning his first state title and helped lead David City to the team title. “It was good to be at the top, rather than the one looking up. It was really exciting, I dreamed of it since I was a kid. It was especially good to help my team out on our way to a state title” Vodicka said. He will have a target on his back entering his senior year, but he feels like its no different than what he faced last year. “I know I mainly just have to outwork everyone. I feel like it will be a lot like last year. I want to separate myself more though this year. Sometime upsets happen and you can get caught, I want to eliminate that.” Vodicka says. Vodicka was also won the NEUSA and AAU Folkstyle State Championships in 2019. He also won NEUSA Greco in 2018 and was runner up in 2018 in NEUSA Freestyle.

2020 has challenged a lot of student athletes to push them selves. Vodicka is no different “When school first got cancelled, I was home 24/7. My little brother and I got weights from our grandparents and set up a little home gym in our basement. We worked out 6 days a week. It was nice in June, our coaches came to our houses and gave us all work out plans to do over the summer. Finally, a couple of weeks ago we were able to get back in the weight room and start working out for football, and have open mats for wrestling.” Open mats have been a welcome event for Dylan. Recently, David City went down to York for a team camp and got some wrestling in. “I feel like the team camp went well. I was a little rusty, especially since we had not had open mats until recently. Overall I did pretty well though.” It will be a quick turn around, as David City will begin school on August 12th.

When it comes to college, Vodicka has a lot to think about entering his senior year. He has not decided on a major yet but he says “I love working outdoors. I have been doing shingles the last couple years so maybe something along those lines. I have been thinking about Construction Management or Business. I want to find the school that has the best fit for me for academics and wrestling. Size doesn’t really matter to me. I want to be somewhere close to home, where it is not too bad of a drive to come back.” Colleges have started reaching out to him. He has heard from Morningside which already has former David City wrestler, Noah Styskal. He also talked to coaches from Nebraska Wesleyan, Chadron State, Nebraska-Kearney, and Nebraska. He is strong in the class room and on the mat and will have plenty of options when it is time to make a decision.

Entering his senior year, he will look to end his career in a big way. He has a lot of goals this year, “I want to be good leader for the team. I want to go undefeated and win the Montana tournament this year. It would be really cool to go back to back in the state championship. I don’t know how many matches I’ll get, but I need 51 more wins to break the school record.” He is a determined wrestler and football player who will look to make noise in both sports. He is a great role model in the class room and on the sports surfaces for younger teammates. David City Coach, Tahner Thiem added “In my 10 years of coaching at David City, I have never had a more recruitable athlete. Dylan has a 4.0 GPA, a very high ACT Score, and is an outstanding athlete. On top of that, he is hardworking, humble, and a charismatic person to be around. Dylan has a personality that draws people to be around him. Because of his charismatic personality, he is a great leader. Dylan knows when it is time to have fun and when it is time to work.” He will look to take those qualities and make some college coach very happy to have him as a part of his team.