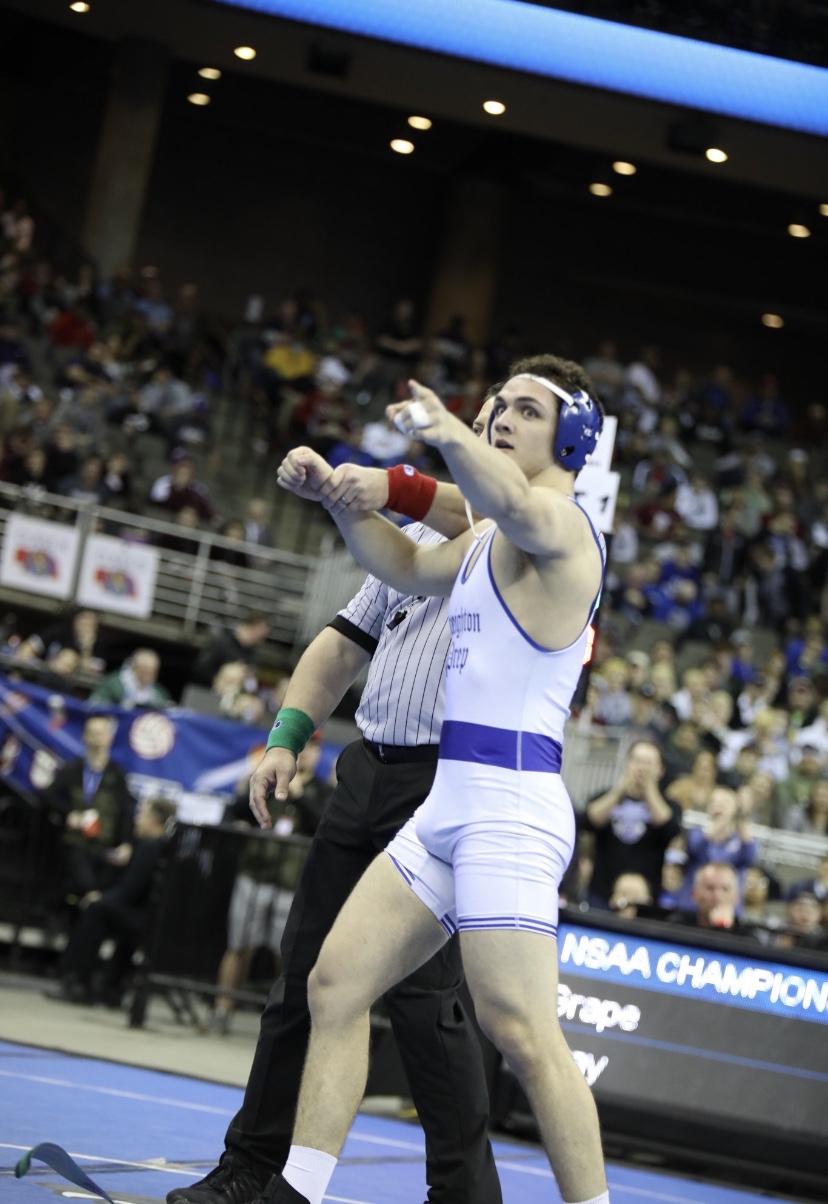 Tony Pray entered the state finals last season for the second time in his high school career. As a Sophomore, he fell to Kasten Grape in the 220lbs state finals match. As a Junior, he was able to reverse the outcome and win his first state title. It was the first individual title for the Jays in four years. Before that span, Creighton Prep had a champion 27 out of 29 years. It is something Pray takes a lot of pride in. “It was really nice to win for the rest of the program. Wrestling is finally getting a little more attention. We’re not thought about as much, but we are tough, work hard, and deserve to be a part of Prep just as much as Football, Basketball, and Swimming. Its been nice to be able to help bring attention back to the Prep Wrestling Program.” Tony said. He will look to add to his legacy as a Senior.

He has put together a solid young career in wrestling. This past season in his state title run, he went 49-0. Bringing his career record at Prep to 126-19. He is a 3x state medalist, with his first and second place finishes, he also finished sixth as a freshman. In his club career, he has competed all over the country including Fargo, UWW, Virginia Beach and even as recent as this week at the Iron Man Midwest Duals in South Dakota. He helped lead MWC Gold to a 7th place finish in Freestyle and 3rd place finish in Greco.

Tony has been a quick learner and has developed a lot in a short amount of time. He only began wrestling in seventh grade. He wrestled for Gretna Middle School before joining MWC heading into his eight grade year. He gained a lot of interest in wrestling from watching his brother Nick, who was a state runner up in 2016. Nick was big influence and role model for Tony. “I wanted to be Nick. I remember watching him in the finals my seventh grade year, it was my first year wrestling, and I wanted to be like him. I wanted to be a big guy and wrestling in the state finals. I loved watching him wrestle.” Tony added. Wrestling has taken off for Tony. Getting to wrestle at MWC has helped him become the wrestler he is today and even bigger, the man he is today. Tony says “Wrestling their helps a lot. The more you’re around the sport, the more comfortable you get. You learn fundamental theories that you can apply to any situation. You just go out and wrestle, its not about a certain move, you just do what is best for you. Being around it all makes it easier. Being around MWC and Zac is great, he builds strong character, has a great environment, and he really helps mature young wrestlers into young men. It is also nice being around Zac since we have our Creighton Prep connection.”

2020 has not been easy dealing with Covid. Dealing with school, training, and starting a new job on top of the disease has been difficult, but is something Tony is taking in stride. “When Prep went to online classes I really didn’t mind. I am really good at organizing my time and it allowed me to really focus on certain classes that needed more attention. I prioritized my work and focused on my more difficult classes. If I had time, I would get a work out in between.”  This school year, Prep plans to have students in school,  wearing masks, sitting in assigned seats, taking self screens in the morning, and will also have a stay at home option. So if a student is not feeling well, they will stay home and log in to class on the computer. Another thing that will help out Prep students is that they are on block scheduling so there are less students in the hallways.

A big decision that awaits, is where Tony will be attending college. He has been in contact with many schools including Virginia, Air Force Academy, Iowa State, Augustana, Nebraska-Kearney, Lindenwood, Coast Guard Academy, and Northern State. The process has definitely been difficult amid the virus going on, and not knowing when he can take visits. “It is very stressful, the nature of everything going on has made it difficult to take visits. I want to take my time and contemplate where I end up. I am beyond grateful to be in this position. I want to be able to get to campuses, see if it is the right fit, the right coaches, and the right program for me.” he said. When it comes to finding the right fit, it all starts with on thing. “Education is first and foremost. I can go wrestle and in 4 years get my degree. That degree is going to set me up for life. I am good at math and I want to major in Finance or Engineering and also minor in Music.” He loves music, he has played piano for a long time and is taking lessons at the Omaha Conservatory of Music and enters piano competitions. He has also taught himself to play the Mandolin, Ukulele, Bass, and Guitar.

Pray is a jack of all trades: Math, music, and the mat. He has excelled at everything he has put his mind to. There is still so much to see in his future. Still pretty raw to the sport, his ceiling is unknown. He is an exemplary young man with ambition and desire to always achieve more and never settle. Whichever school he ends up at will be lucky to have him on the mat and in the classroom.