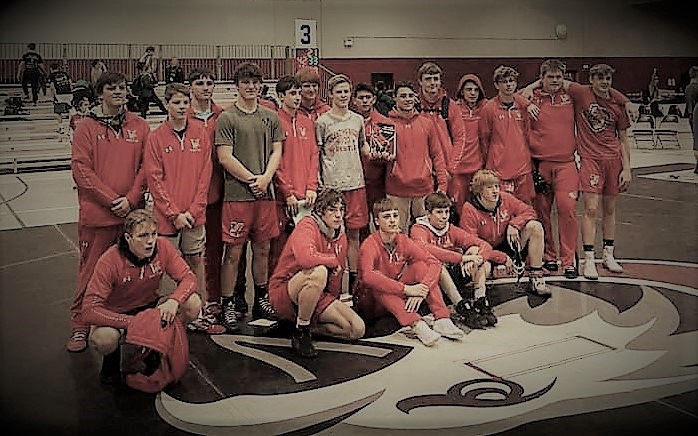 This is a fantastic year for wrestling in Class C. Some incredible teams will take the mats in Kearney this weekend. The unpredictability of the state dual tournament makes things extremely exciting. Logan View shook things up last year by immediately knocking off Valentine in the first round. Will we see something similar this year?

Overall in the second year of determining the state duals through regular season results the NSAA’s formula seems to have done well. It brought in eight out of our most recent top ten dual teams, so it worked out well for Class C this year. The top six teams from the dual rankings actually are the same top six teams below, but in a different order.

#1 Aquinas vs #8 Raymond Central
Top ranked Aquinas really cemented themselves as a serious state duals title contender with their win over in town rival David City a few weeks ago. They made several savvy lineup moves and you can expect them to do the same during this tournament to give themselves the best opportunity to win. Raymond Central has been a fixture in the Class C rankings this season. The two teams met at the Wood River duals in early January with Aquinas winning 45-19. Raymond Central will likely circle 113 and 145 as matches they’d like to reverse the result of to get themselves in a position to pull off the upset. At 120 we’ll have #2 Albrecht for Raymond Central against #3 Vandenberg of Aquinas. At 152, #2 Kreikemeier vs #5 Eller was a close match when they met earlier in the season. Aquinas looks like they’ll win 8-10 of the matches and advance.

#4 Logan View vs #5 Amherst
This should be an exciting first round dual that boils down to a few weights and perhaps bonus points. Logan View had an exciting dual win over Valentine last year to shake things up in the first round. Their lineup continues to change as the season progresses. It looks like #2 McNulty has moved up from 132 and will be competing at 138 this weekend and for districts/state. Amherst has made some moves of their own dropping Hollander to 152. We have a ranked matchup at 220 with #3 Potts and #8 Cone. On paper Logan View is favored in seven matches to Amherst’s five and we have 113 and 145 marked down as toss up matches. Give the slight edge to Logan View with minimal margin for error.

#3 Conestoga vs #6 David City
Out of all of the first round duals this one probably has the most potential close matches. 106, 113, 132, 145, 152, 160, 182 and 195 are all weights where we could see wins by decision. Ranked matches could occur at 132 with Williams and Harris and 195 with Escamilla and Thonen. We’ll see if any of the teams make lineup adjustments. Ultimately It looks like David City holds the edge in enough of of the close matches and most of the upper weights and that should propel them to a first round win.

#2 Valentine vs #7 Battle Creek
A rematch of the 2017 state duals final won by Valentine. Valentine has been the top ranked dual team this year, while Battle Creek has slowly emerged as a solid dual team as the season has progressed. The Braves appear to have their lineup set with some recent weight drops that make them even stronger yet. Valentine has the luxury of having multiple solid guys at several weights, which gives them some nice lineup flexibility in duals. Both teams were at the Norm Manstedt Invite, although Battle Creek didn’t have their whole group there. 132 should be a good match to watch with #5 Olson and #5(138) Lade. Valentine is just too strong in this dual and should advance into the semifinals.

#1 Aquinas vs #4 Logan View
It’s been since mid-December since these two teams have seen each other. Aquinas finished 17.5 points ahead of Logan View which is relatively close. Both teams have solid wrestlers at nearly every weight. Aquinas looks like they match up pretty well against Logan View. 120 is a battle of state medalists with #3 Vandenberg and Mueller. 138 should pit #2 Nickolite against #2(132) McNulty. Aquinas 145 Schrad has almost made 138 this season and flipped with Nickolite in duals so we could see them make that change if they deem it necessary. 195 will be #2 Booth of Logan View vs #5 Schultz. Logan View really needs to pull those three matches out and maybe get some bonus points if they’re going to knock off the top seeded team in Aquinas.

#2 Valentine vs #6 David City
Valentine and David City have see each other on two occasions at tournaments this season already, with Valentine finishing ahead of David City on both occasions. As far as duals go though, this one is going to be very close. Valentine should have the edge in the middleweights, where David City will need to pick up wins at 106-113 and 170 on up to stay in the dual. Fully expect Valentine to have Battershaw go to 182 to wrestle Allen. Ranked matches at 132 between #5 Olson and #7 Harris, 145 with #1 McGinley and #6 Valentine (9-7 in first meeting), and possibly 170 with #1 Vodicka and #4 Battershaw. 113 is interesting as Schindler and Lamb have split two meetings this year. Right now it looks like this dual could be split with seven wins each. We’ll give Valentine the edge on bonus points thanks to their #1 guys. If McGinley isn’t wrestling for Valentine that could potentially flip the result of this dual. It will be interesting to see what changes are made in lineups for this one as well.

#1 Aquinas vs #2 Valentine
Plenty of matches to look forward to if it is indeed these two teams that make the finals. Aquinas was runner-up a year ago and would love to improve on that finish. The Monarchs are a great bet to get to this point as they do have a decent edge on paper in their first two duals. Assuming Valentine survives the test against David City in the semifinals, they’ll have their work cut out for them again. The 126 match between #1 Williams and #5 Zitek is a rematch of the 2019 state finals match in Omaha. Williams won that one by a narrow margin and will be a must win for the Badgers. #1 Krolikowski and #2 Nickolite could match up at 138. Like we mentioned earlier, state medalist Schrad could also get the nod at 138 and perhaps they go with Nickolite against #1 McGinley at 145. We’ll see if Valentine moves Olson and Battershaw up a weight. We’ve seen Aquinas move their 170 Kment up to 182 and that’s what effectively won them the dual against David City during the regular season. This dual is so even it’s hard to even guess which team will win. 113 and 220 are unranked matches, but could be the deciding matches of this dual. It’s almost pointless to pick a winner from this one as they are two very evenly matched teams. But we’ll give the edge to Valentine here as they have the potential negate some of Aquinas’s big guns at 126 and 138.