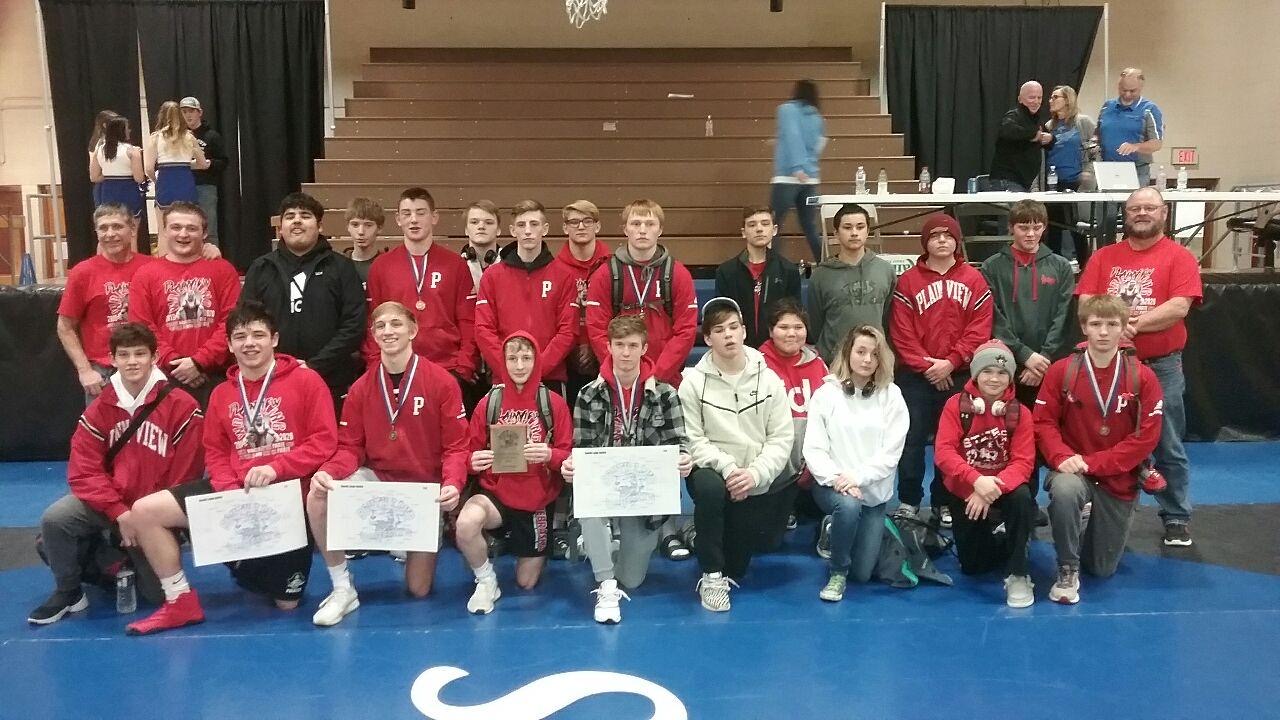 Preview
This district without question is the toughest in Class D this year. 39 currently ranked wrestlers are set to compete in the D1 district in Plainview. Defending state champion #1 Plainview will come in as the favorite over #2 Neligh-Oakdale and #5 Burwell in the team race. Neligh-Oakdale and Burwell should be a close race for the runner-up trophy with just one qualifier separating them. 106 is the feature weight in this district with the top 5 ranked wrestlers in the state. 145, 152, 195 and 220 should also be some really good weights to keep an eye on in this district as each weight features at least 3 wrestlers in the current rankings.

Please send any suggestions, updates or corrections to dru.kastler@gmail.com, KastlerDA on Twitter, or simply comment on this post. We will update these predictions the week of districts to include the next few weeks of competition. Records were pulled from Trackwrestling and may not be 100% accurate, but for the most part should be current as of 1/26.

106
This is undoubtedly the highlight weight of this district. With 8 wrestlers with 75% or better winning percentage. Also, the top five ranked wrestlers at 106 are all in this district. Defending state champion Eli Lanham of Plainview already has head to head wins over #2 Bennet and #3 Dane. #2 Bennett has an early season head to head win over #3 Dane. Dane and #4 Sinn have a few common opponents but have not seen each other yet this year and could be a toss-up match. Sinn appears to be the likely third seed based on the fact he is a returning qualifier. That would make Dane and #6 Beckman of EPPJ the 4/5 quarterfinal match. The winner of that one will be great shape to qualify. The loser would wrestle the loser of the Sinn/Bennett semifinal match in the heartbreak round. This is of course if the seeds hold up that way and no one changes weights.

120
Kester and Phillips should meet up in the finals at this weight. White and Mosel have the next best records at this weight. Smith, Smutz, Johnson, and Casey should also all be in the mix to qualify. Another weight weight plenty of depth in this ultra tough district.

126
Miller just had a big win over #1 Wood of Central Valley this last weekend and appears to be the favorite to win this district. 2-4 is pretty fluid in this district. Barton has a been solid all year long. Frahm made the mid-season drop to 126 and has competed well against some tough competition. Returning qualifier McLaughlin has been injured most of the year it appears he may be a question mark to even compete at districts which could open on spot up for some of the contenders.

Update Frahm now has a common opponent win over Barton with Wells of Anselmo Merna, so they flipped in the 2-3 spot.

132
Larson is the clear favorite to win this weight. #6 Dawe, Bennett, and Mosel have the next best records at this weight. Twin Loup has two potential qualifiers here.

Update: TenBensel bumped up from 126 a few weeks ago and has a really good chance to get the fourth and final spot at this weight.

138
Returning state champion #2 Christensen looks like a good bet to capture the district title. Wilmes just beat Rudolf head to head last weekend. Rudolf has a head to head win over Micheel. Don’t be surprised if some 132 contenders bump up as everyone else at this weight has a losing record.

Update: Sonderup dropped to 138 this past weekend. He actually very well could be the top seed at this weight as he has a common opponent win over Christensen with Martinez of Central Valley.

145
Coons is the favorite to win this district right now, but this weight will be a battle. Hanvey dropped to 145 this past weekend, where he had an outstanding showing. Hanvey currently has a common opponent win over Coons and a head to head over Sonderup. Currently ranked #6 at 152 Stewart as dropped to 145 as well. He has wrestled really well since making the move including a head to head win over Sonderup this past weekend. Sonderup, Wortman, and Stewart should all battle it out for the final spot to go to Omaha.

Update: with Sonderup dropping to 138 this opens the door for Wortman to qualify.

160
Fuelner finally competed again this weekend after missing a good majority of the middle of the year. Christensen should push Fuelner for the district title. Ostrom and Green appear to be the next best guys at this weight. Votherms, Bottorf, Bellar, and Stearns should all be in the mix for a spot as well.

Update: Ostrom beat Christensen in OT at state duals this past weekend. Expect another tight semifinal between the two.

170
#2 Mejia should be a heavy favorite to win this weight. Gideon has been solid most of the year and looks to be the next best guy. Pavlik and Dempsey should battle it out for the final two spots. Again we have another situation where you shouldn’t be surprised to see some movement up from 160.

182
#1 Dawe is still unbeaten on the year and has given us no reason to doubt his ability to win this district. #5 Kaup has split matches with #8 Evans. #8 Evans has a head to head win over Hammer.

195
#2 Pofahl has a head to head win over Thiele and a common opponent win over Dawe. Thiele and Haverluck have the next best records. Dawe and Thiele could meet yet before districts which would have an impact on seeding and possibly their district finish. Four ranked wrestlers make this one of the marquee weights in D1.

Update: Haverluck picked up a common opponent win over Thiele a few weekend ago with Miller of Anselmo-Merna so they flip in the 2-3 spots.

220
Gale had a couple common opponent win over Klabenes. Klabenes has a head to head win over Pickrel. Busch and Pickrel should battle it out for the final two spots.

Update: Pickrel is done for the year which opens the door wide open for Dady or Burrell to qualify here.

285
Kerner leads the pack. Mayfield and Kerwood have the next best records. Reikofski and Hathaway will battle it out for the final slot to go to state. Overall a pretty solid weight with a clear top four.