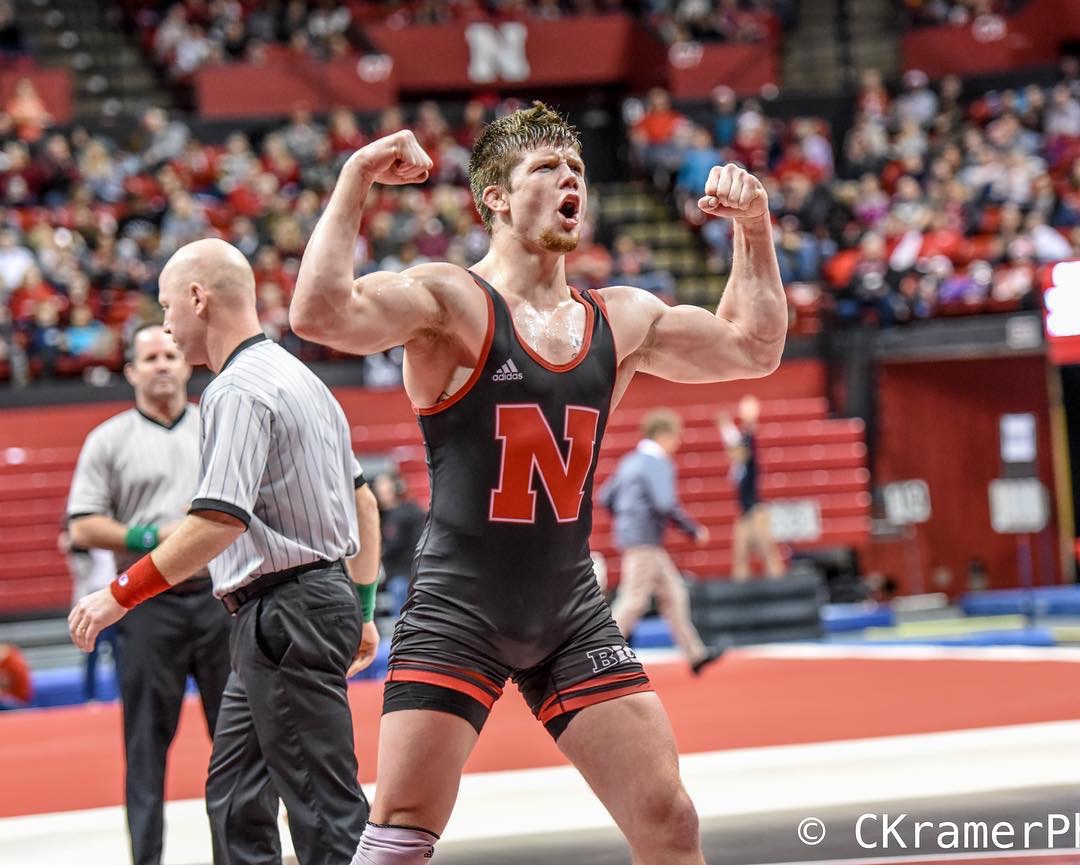 Nebraska will be heading to Pittsburgh this week to compete in the NCAA Championships, and will be looking to improve on last year’s ninth place finish. Last year, they had three All-Americans in Chad Red, Tyler Berger, and Taylor Venz. This year, the Huskers will be taking eight wrestlers to nationals. Red, Berger, and Venz will return to try and improve on their individual All-American finishes, and be joined by teammates Zeke Moisey, Isaiah White, Mikey Labriola, Eric Schultz, and David Jensen.

At 125 pounds, Zeke Moisey will try become a three time All-American. The West Virginia transfer finished in eighth place last season. As a freshman, Moisey was national runner up. He has now qualified for nationals all four years of his wrestling career. At the Big Ten tournament, he had to medical forfeit out with an apparent shoulder injury. However, he still made the NCAA tournament with a wild card. After a bracket adjustment, Moisey is the 18 seed and will wrestle Elijah Oliver from Indiana in the first round. He will be looking for revenge after losing to Oliver by fall in the first round of the Big Ten tournament. Moisey will be on the same side of the bracket as defending national champion Spencer Lee from Iowa. Also on his side, is second ranked and undefeated Nick Piccininni from Oklahoma State, and sixth ranked Sean Russell from Minnesota. If Moisey can win his first match, he could see Piccininni in the second round. Moisey carries a 13-10 record and is a senior this year. He will be looking to end his career on a high note.

The Husker’s next qualifier is redshirt sophomore Chad Red. The 141 pounder is probably the hottest wrestler for the Huskers right now. He was already riding a lot of momentum entering the Big Ten tournament. That continued for Red, as he made it all the way to the championship before falling to #3 Joey McKenna from Ohio State. Along the way, Red upset #5 Michael Carr from Illinois and #6 Kanen Storr from Michigan. This will be Red’s second NCAA tournament appearance. Red got hot at the end of the season last year as well, and finished in seventh place, becoming an All-American. This year Red will enter the NCAA tournament as the 16 seed and wrestle Ian Parker from Iowa State. They have not wrestled this year. If Red can get by Parker, he will have a match up with defending National Champion Yianni Diakomihalis from Cornell. The top half of the bracket also features Big XII champion Dom Demas from Oklahoma, along with top ten wrestlers Jaydin Eierman from Missouri, Josh Alber from UNI and Storr from Michigan.

Second ranked and second seeded Tyler Berger enters the tournament for the fourth and final time in his career. He is a two time All-American, finishing in fifth as a sophomore, and third last season. The senior is 21-3 on the season with two of his losses coming to top ranked Jason Nolf from Penn State. In the Big Ten tournament, Berger was runner up, losing only to Nolf 12-4 in the finals. He will have Ben Barton from Campbell in the first round. They have not wrestled this year. Top ten wrestlers Kaleb Young from Iowa, Larry Early from Old dominion and Steve Bleise from Minnesota will also be on Berger’a half of the bracket. Should Berger make the semifinals he could end up facing another Big Ten opponent in either Young or Ryan Deakin from Northwestern.

Isaiah White will head to nationals for a third time in his career. As a freshman, White was a DII national champion for Notre Dame College. He then transferred to Nebraska, and last season he qualified for nationals and went 2-2. This year, White is 20-7 and coming off a fifth place finish at the Big Ten tournament. He will head to nationals with the seven seed and wrestle Joseph Gunther from Illinois first round. White beat Gunther earlier this season with a 7-2 decision. He will have to navigate a stacked bottom half of his bracket. It features: #3 Logan Massa from Michigan, #5 Josh Shields from Arizona State, #10 Bryce Steiert from UNI, #11 Branson Ashworth from Wyoming. and two time defending national champion #2 Vincenzo Joseph from Penn State.

Mikey Labriola will be heading to his first NCAA tournament. He is a redshirt freshman and is currently 26-6 on the season. Labriola finished in fourth place at the Big Ten tournament, including an upset of 10th ranked Dylan Lydy from Purdue. Labriola will be the 10th seed and will wrestle Daniel Bullard from NC State. Labriola won the match by major decision 13-4 in a December dual. If he wins that one, he could have a second round match up with #6 Jacobe Smith from Oklahoma State. His road beyond that could be a quarterfinal against #2 Daniel Lewis from Missouri, and a semifinal against defending champion Zahid Velencia from Arizona State. It will be a tough road for Labs, but he has been wrestling well all year.

The third returning Husker All-American is Taylor Venz. The 184 pound sophomore finished fourth last season to gain All-American status. This season, he is 21-7 and coming off a fourth place finish at the Big Ten tournament. He has been ranked as high as third in the country this season, but has recently dropped a few spots. He will be the 9th seed, wrestling Tanner Harvey from American University in the first round. Venz is another wrestler who will have his work cut out for him. His half of the bracket features top ten wrestlers #1 Myles Martin form Ohio State, #3 Max Dean from Cornell, #4 Nino Bonaccorsi from Pitt, #7 Emery Parker from Illinois, and #9 Ryan Preisch from LeHigh.

Another Husker sophomore will also be making his second appearance at nationals. 197 pound wrestler, Eric Schultz will be looking to improve on last years 2-2 finish. He is 21-11 this season. He finished in fourth place at the Big Ten tournament, picking up an upset of Purdue’s Christian Brunner along the way. At the NCAA tournament, Schultz will be the 14 seed and wrestle Tanner Orndorff from Utah Valley in the first round. Schultz defeated Orndorff in a close 6-5 decision in November at the Journeymen Duals. A win by Schultz would bring him a match up with undefeated three seed Preston Weigel from Oklahoma State. Schultz could also see rematches with Nathan Traxler from Stanford and Jacob Warner from Iowa on the top half of his bracket.

Husker heavyweight David Jensen will round out the field. Jensen is 15-7 on the season, and is coming off a sixth place finish at the Big Ten tournament where he pinned sixth ranked Mason Parris from Michigan in the consolation quarterfinals. Jensen had to medical forfeit in the fifth place match. Jensen will be 17 seed and wrestle Chase Singletary in the first round of the NCAA tournament. Singletary defeated Jensen by a narrow 7-5 decision in mid February. A win by Jensen would pit him against the top seeded and former Husker, Derek White from Oklahoma State. Should Jensen get by White, he could see match ups against two wrestlers he previously defeated in Parris, and Sam Stoll from Iowa.

Nebraska wrestled tough at the big ten tournament and will need to pick it up another notch heading into the NCAA tournament. Penn State will be the heavy favorite with fellow Big Ten foes Ohio State and Iowa, along with Big XII Champion Oklahoma State all looking to unseat the them at the top. With five of the qualifiers returning next season, expect big things to come in the future for Nebraska. The Huskers will be something we can all hang our hats on and enjoy watching after the week this state has gone through.