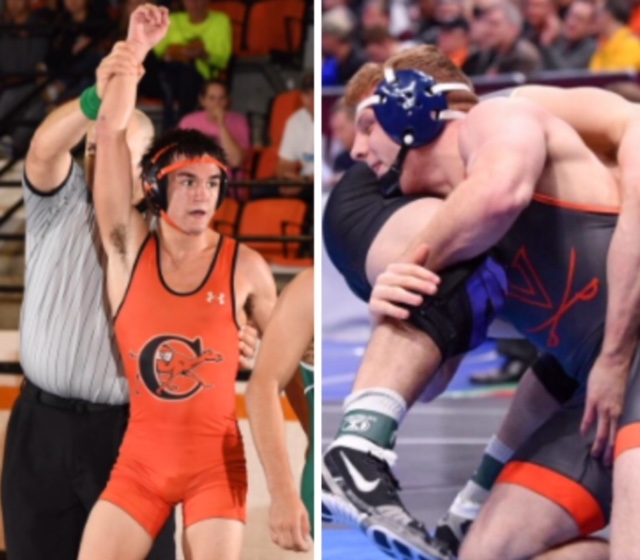 Meink is a true sophomore at Campbell University. He has been the starting 125 pounder for the Camels for the last two seasons. Last year, he was nominated as the conference freshman of the year. He was 23-9 in his first season as starter. This season, he is 14-11. Meink wrestled in Nebraska for Omaha Skutt, where he won four individual state titles and four team titles for the Skyhawks.

Schany is a redshirt senior for the Virginia Cavaliers. He is 14-14 on the season including an upset of #8 Chip Ness from North Carolina at the Cliff Keen Invite. He has spent most of the season in the rankings, and is currently ranked #18 by FloWrestling. This will be his second appearance at the NCAA tournament. Last season, he qualified for NCAA’s after finishing 3rd in the ACC tournament and receiving an at large bid. He was also a third place finisher in the ACC as a redshirt sophomore. Schany has compiled a 64-57 record as a starter. Before Virginia, Schany was a four time state champion for Blair High School.

I caught up with the two of them.
First with Will,

Q: Will, you’re going back the the NCAA tournament after qualifying last season. How will you approach the tournament this time around having that experience?

A: I would say that, yeah the experience of being there once is big. It helps with nerves and anxiety of wrestling at nationals and getting used to wrestling a tournament where every match is going to be somebody ranked or good enough to be ranked. I would also say last year being it my first time, I didn’t have that high of expectations for myself. This year I have a completely different mindset and higher expectations for myself.

Q: How much does it mean to you to get to the tournament as a senior, and capping off a great career?

A: It definitely means a lot. First I want to accomplish my goals on the mat, and most of those goals, the first step is to make it to the tournament. Just to be able to end it at nationals with my family and friends all there, is going to be awesome. I’m really lucky to have a lot of support, there’s a group coming to Pittsburgh. I didn’t get here alone, and I am glad the people who have got me to where I am, will be there with me.

Q: When you look back on the last five years of your career, what do you take away most from your time at Virginia?

A: Just all the relationships I have made. I wouldn’t trade anything for the experience I have had there. When you’re in the same place for five years, you get to know and form relationships with some pretty special people. I have grown up a lot from when I first came to college, and I’ve become a better person because of the people around me. It’s crazy to me that my career ends in a week or so, but more than any of the wrestling, I will remember my teammates and the good and bad times we have had. It will be something I will remember.

Now with Korbin,
Q: Korbin, entering the SoCon tournament, what was your mindset knowing there would only be one wrestler advancing out of your conference?

A: Well it was no surprise to me they were taking only one. Going into the tournament, I really was focused on wrestling with dominance as our team was in a race to win the tournament. In my mind, I knew I was the best wrestler in the tournament and was just very excited to prove it. I envisioned for weeks, me winning the tournament in many different scenarios, so I had so much confidence going into it.

Q: After defeating Alonzo Allen, what was that moment like for you, getting your hand raised, knowing what you had just accomplished, and you’re heading to Pittsburgh?

A: There was a lot of relief lifted off my shoulders. Knowing that I now have just one more tournament to go this year, all my focus is on it. I can finally now mentally prepare myself for the tournament. I get to compete against the best kids in the nation and experience it with the best teammates at Campbell.

Q: What are your expectations heading into the NCAA tournament?

A: I’m expecting myself to finish as an All-American. I have worked hard all year and put myself in a great position to do great things. I am planning on taking this opportunity and making the best out of it. The NCAA Tournament is the super bowl of wrestling, and not everyone gets the opportunity I’ve created for myself.

I know everyone in Nebraska, along with myself will be following closely. These are two remarkable opportunities for these wrestlers and their careers. For one wrestler, it is a crowning moment to cap off a long and productive career. For another wrestler, it is a moment that could springboard his career for the next two seasons. They both have been outstanding wrestlers from the high school level, and are now showing it in college.