DII and DIII Day One Results. 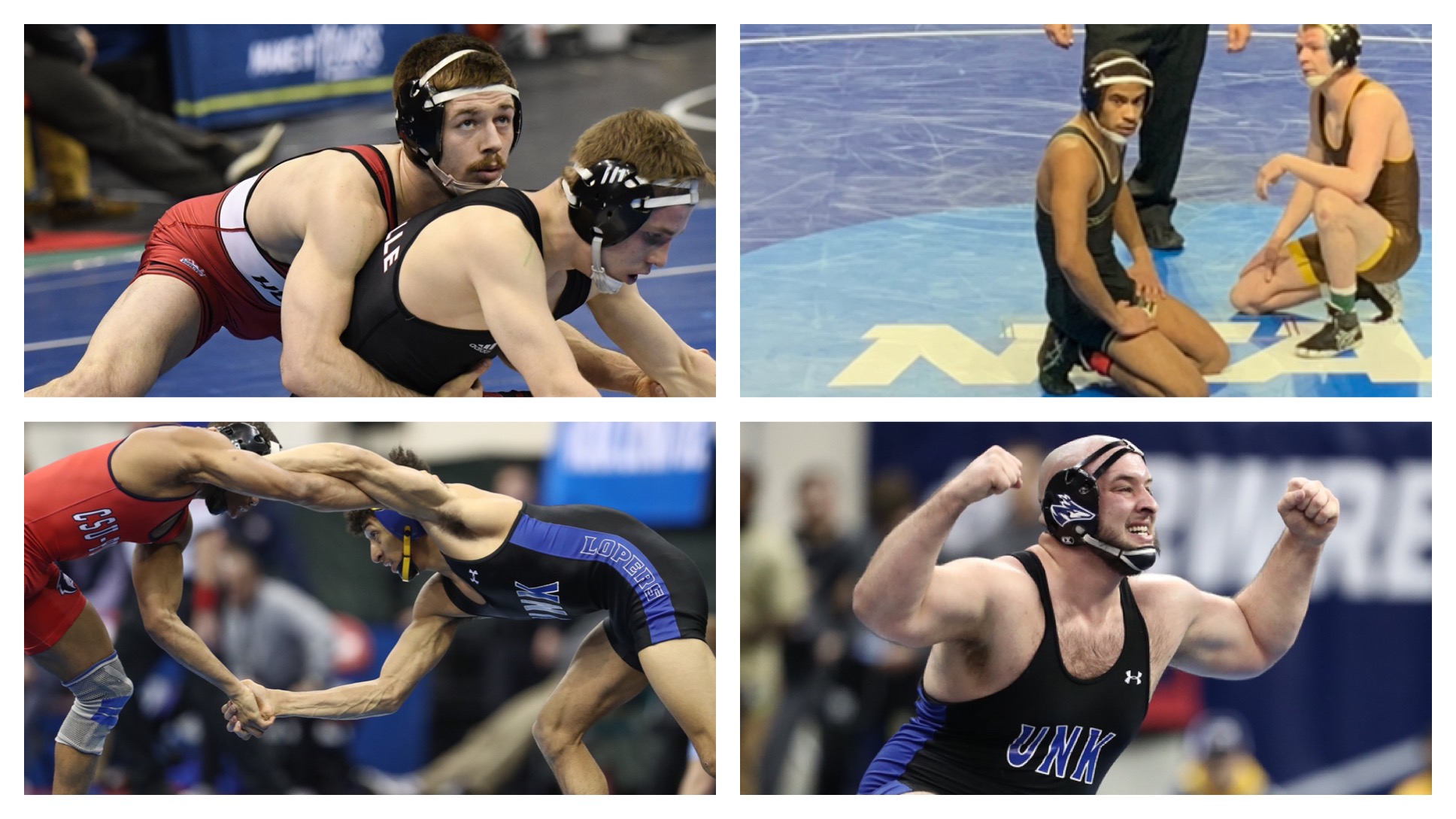 13 wrestlers with Nebraska ties wrestled on Friday. They competed for Nebraska-Kearney, Chadron State, Nebraska Wesleyan, Maryville(MO), St. Cloud State, and Central Missouri. After day one in DII, Kearney is currently sitting in sixth place with 37.5 points. They have four wrestlers remaining, and all four are in semifinals. St. Cloud is leading the way with 56.5 points. Chadron State had two qualifiers, both unfortunately were eliminated from the tournament.

Individually, we start with the story of the day. In Division III, Eron Haynes accomplished something that has never happened before. Two weeks ago, Haynes became the first national qualifier from Nebraska Wesleyan. On Friday, Haynes went 2-1 to become the first All-American in program history. A graduate from Central High School, Haynes is in his redshirt freshman season. He started the day off with bang in the first round. Haynes knocked off the four seed, Dante Ginnetti, by major decision 18-9. In the second round, he lost a very close decision to the five seed, Cameron Timok from Central College. Haynes fell to the blood round where he came out with his hair on fire. Haynes picked up a 17-6 major decision allowing him to become All-American. Haynes will wrestle in consolation quarterfinals tomorrow against the eight seed, Ferdinand Mase from Ithaca.

Nebraska-Kearney qualified six wrestlers for nationals. and after day one, they have four wrestlers left. Redshirt sophomores Josh Portillo, Wes Dawkins, and Matt Malcolm along with redshirt junior Jarrod Hinrichs are all in the semifinals on saturday. Redshirt senior Calvin Ochs and Zach Stodden both saw their careers come to an end on Friday. Ochs got off to a hot start winning his first round match by tech fall 17-2. In the second round he lost a very controversial match 2-1. with :17 seconds left in the third period it looked like Ochs could have either received a fleeing violation which would have tied the match, it also looked like he had a take down on the edge that would give him a 3-2 lead. The call did not go his way and he went to the backside of the bracket. In second round consolations Ochs fell 13-3. Stodden went 0-2 on the day. He lost in the first round to the second seed Kolten Eischens from St. Cloud State, and fell in the consolations 10-4.

Portillo entered the tournament as the three seed and went 2-0 on the day. The Iowa native had two decisions on the day. Winning in the first round 8-3 and quarterfinal match 14-9. Portillo now will have 2016 national champion Brett Velasquez in the semifinals.

Lincoln High native, Wes Dawkins picked up a first round win by tech fall 18-1. He carried that momentum into the quarterfinals where he picked up a massive upset over the two seed D’Andre Broomfield 6-1. Dawkins avenged a second period pin to Broomfield in the regionals. Dawkins will have Hunter Bray from Notre Dame College in the semifinals.

Matt Malcolm the top seed at 157 pounds continued rolling this season. He picked up an 8-1 win in the first round. In quarterfinals he was a machine picking up a tech fall 17-2 over Kevin Almond from Emmanuel(GA). Malcolm now will square off in semifinals against Nate Smalling from McKendree.

The final Loper to advance on the day was heavyweight Jarrod Hinrichs. The Fillmore Central graduate was 2-0 on the day. He won his first match 4-1. In quarterfinals he topped the four seed Tristen Weirich in overtime 5-3. Hinrichs will set his sights on a semifinal match up with the top seed in the tournament, Terrance Fanning from Wheeling Jesuit.

Chadron State junior tandem Wade French and Chase Clasen made their DII nationals debut on Friday. Clasen was tasked with wrestling the second seed James Pleski in the first round. He fought hard but ultimately fell in sudden victory 3-2. He won his first consolation match picking up a 10-3 decision, then fell in the second round 4-0. French won his prelim match for bracket placement 5-3. In his first round match, he fell 9-4. In consolations he had a regional rematch against Khalil Gipson from Adams State. Gipson avenged that loss and defeated French 6-1.

St. Cloud State had two wrestlers from Nebraska competing for them. 125 pound senior Brett Velasquez went 2-0 on the day, guaranteeing him All-American status all four years of his career. The Bennington native is the two seed in tournament and picked up a first round fall in 4:16 and a quarter final decision 6-1. He will now face Josh Portillo in the semifinals. Velasquez defeated Portillo earlier this season in a dual 5-4. Senior Chance Helmick, a Beatrice graduate, made his nationals debut. Entering nationals, he was undefeated and ranked fifth in the county. He went 2-2 on the day. He won his prelim match 3-2 and first round match 3-2. Helmick fell in quarterfinals 10-5 sending him to blood rounds. He was unable to keep his season going as he fell 3-2.

Nebraska natives John Feeney from Omaha Northwest and Logan Radik from Gretna also made their nationals debut. Feeney, wrestling for Central Missouri had a tough first round match, losing to fellow Nebraska native Wes Dawkins 18-1. In consolations he fell in sudden victory 6-4. Feeney is a redshirt junior and will look to return to nationals next season. Radik was 1-2 on the day. The redshirt sophomore lost his first match by fall. In consolations the heavyweight outlasted his first opponent 2-1 before losing by fall in the second round consolation match.

The final day of the tournaments will be held tomorrow. Wrestling begins at 10am eastern with finals starting at 7pm eastern for both divisions. All matches can be streamed on NCAA.com free of charge.