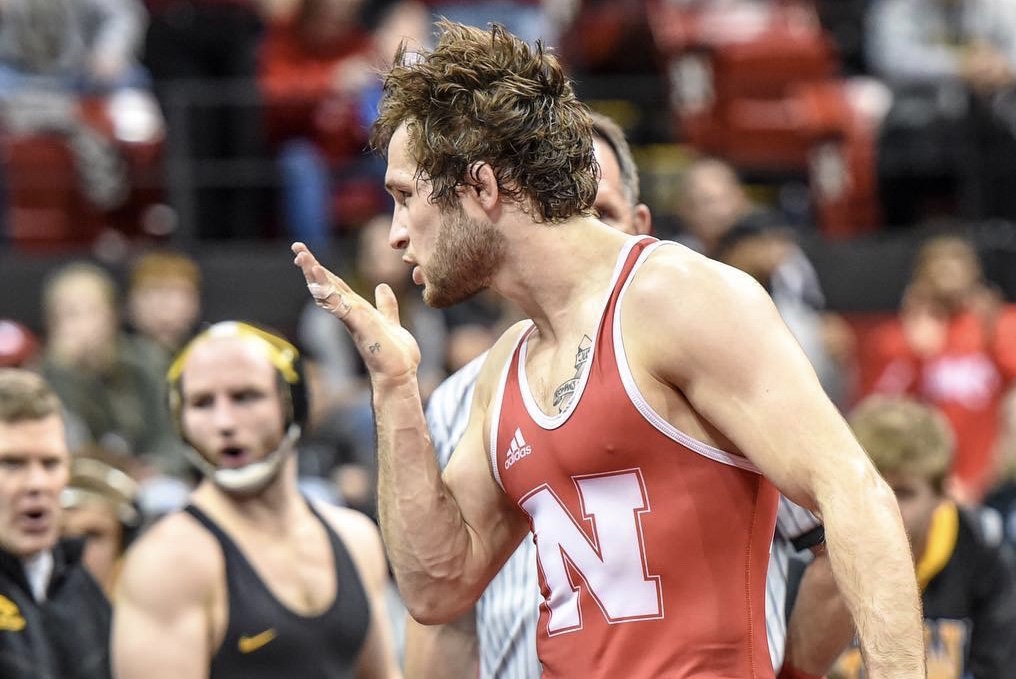 By: Cody Mainquist and Brennan Stessman.

This weekend Nebraska will head off to Minneapolis, MN to compete in the Big Ten Conference wrestling tournament. The Huskers will be looking to improve on last year’s 5th place finish. The Huskers will have ten wrestlers competing with nine wrestlers already knowing their seeds. Nebraska went 12-5 on the year with two of the losses coming by criteria. In Big Ten wrestling, Nebraska was 5-4 on the season with Wisconsin being decided by criteria. Nebraska finished their dual season in 6th place overall. In tournament action, the Huskers finished in third place at the Cliff King Invitation in Las Vegas. Nebraska did end the season on a high note by defeating Stanford 31-9 with five bonus point wins.

Heading into the Conference meet, Nebraska will be lead by two seniors. Starting out at 125 pounds, Zeke Moisey will come in as the seven seed. Moisey, currently ranked 14th overall, has had a bit of a roller coaster season this year. The previous All-American transferred to Nebraska for his Senior season helping boost the varsity lineup and letting Nebraska redshirt incoming Freshman Alex Thomsen. Moisey is 10-7 on the year, including winning his last two matches. In the Minnesota dual in early February, Moisey Lead #6 Sean Russell 5-2 before being pinned in the third period. 125 pounds will be a loaded bracket as nine of the wrestlers are ranked. Defending National Champion Spencer Lee returns for Iowa and will be looking for revenge against top rated Sebastian Rivera from Northwestern. Rivera handed Lee one of his two losses on the season.

Nebraska has had three different wrestlers compete this season at 133  pounds. Tucker Sjomeling started out the season for the Huskers. He went 3-3 in duals inculding an upset of #8 at the time Montorie Bridges from Wyoming. Against Iowa, Nebraska ran Senior Brian Peska out on the mat to wrestle against Iowa. Peska lost on the evening to third ranked Austin DeSanto. The third and final wrestler out of the group is Freshman Jevon Parrish. Nebraska burned his redshirt in January and threw him into the fire. Parrish will be the 13 seed this weekend after going 1-4 in Duals. 133 pounds will be one of the most competitive weights at the Big Ten Tournament. Six wrestlers are in the top ten in the country. There is four returning All-Americans in Nick Suriano (125), Ethan Lizak (125), Luke Pletcher (133), and last years runner up at 133 pounds Steven Micic from Michigan. Micic is currently the top ranked wrestler in the country. Iowa Sophomore Austin DeSanto went undefeated in conference matches this season, and is coming off a loss to second ranked Daton Fix from Oklahoma State.

At 141 pounds, Nebraska has returning All-American Chad Red. Red had a rough start to his Sophomore campaign. Nebraska sent him to the Doane Open to help try and boost his confidence. Red ran away with the championship winning every match with bonus points, and has been on a hot streak as of late. Red is the eight seed and will be looking for a big weekend and boost himself in to the NCAA Tournament. He has been in and out of the rankings all season. He went 14-8 on the season and 7-6 in duals, and was 4-2 in the Big Ten. There are six ranked wrestlers at 141 pounds, with three returning All-Americans. Chad Red, Nick Lee from Penn State, and third place finisher, Joey McKenna from Ohio State. Lee beat McKenna earlier this season in overtime. McKenna is the defending Big Ten Champion at 141 pounds.

149 pounds has been a bit of a mystery for the Huskers. Nebraska has sent out Zemua Baptista, Collin Purinton, and Jordan Shearer. Baptista a Redshirt Sophomore from Friend, Nebraska made his varsity debut for Nebraska, losing in a close match against NC State. Purinton started the season for the Huskers at 149, he was 8-6 overall, and 2-2 in duals. Shearer has been the representative at 149 for Nebraska through most of the Big Ten season. He is 7-7 overall, and 3-4 in duals. He has wrestled strong all season and been close to upsets against Penn State and Iowa. Finally, against Minnesota, Shearer came through with a big upset of #17 at the time Tommy Thorn. Against Stanford, Shearer also knocked off the #16 ranked wrestler. During the Stanford Dual, it was announced Shearer would be forgoing his Senior season to enter medical school back in his home state of North Dakota. In the Big Ten and the NCAA, there has been one dominate wrestler. Anthony Ashnault from Rutgers, is undefeated, and the majority of his wins have been by bonus points. In early February, Ashnault defeated #1 at the time Matthew Kolodzik 10-2. Now, #2 has gone to Micah Jordan from Ohio State. Jordan was runner up in the Big Ten at 157 pounds last season.

Nebraska will have their highest ranked wrestler at 157 pounds. #2 overall and second seeded Tyler Berger will come into the tournament with a 19-2 overall record and he is 13-1 in duals. Berger has had no breaks in his matches this season, as he has six top ten wins, including a big win in the Northwestern dual against #3 Ryan Deakin. Deakin defeated Berger earlier in the year at the Cliff Keen Invite. Berger’s other loss is to #1 Jason Nolf from Penn State. #5 Alec Pantaleo from Michigan is the defending Big Ten Champion at 157 pounds. Nolf is the defending National Champion. Berger, Pantaleo, and Nolf were All-Americans last year. This year, 157 will have 12 ranked wrestlers with eight of the top ten in the country.

Another weight heavy at the top of the rankings will be 165. Nebraska will have #6 Isaiah White. White is 13-5 on the year, and 10-4 in duals. White has been competitive in every match as all of his losses have come by decision. He also holds a win over #7 Logan Massa from Michigan at the Cliff Keen Invite. White is  the four seed at the Big Ten tournament. The one seed will go to defending national champion Vincenzo Joseph from Penn state. Joseph is one of three returning All-Americans in this weight, joining him is Iowa Sophomore Alex Marinelli and Wisconsin Sophomore Evan Wick. There are six ranked wrestlers at 165.

Maybe the hottest Nebraska wrestler right now is 174 pound Mikey Labriola. The redshirt Freshman is 18-4 and 11-3 in duals. He has not lost since the Penn State dual in January. Labriola will be the four seed at the tournament. The one seed will go to defending Big Ten champ and national runner up Mark Hall. Last year’s Big Ten runner up, and third place finisher Myles Amine, will be the two seed. Hall and Amine are the only All-Americans returning, and there are seven ranked wrestlers.

184 will have returning All-American Taylor Venz for the Huskers. The Sophomore is 16-4 overall and 11-3 in duals. Venz is 6-2 since the turn of the calendar, including a pin of then #2 Emory Parker from Illinois. Venz will be the three seed at the Big Ten Tournament. Leading the way will be top ranked Myles Martin from Ohio State. Martin was Big Ten and NCAA runner up last season to Bo Nickal. Venz, Martin, Emory Parker from Illinois, and Shakur Rasheed (197) are all returning All-Americans. They lead the six ranked wrestlers in the Big Ten.

There is a lot of hope for Sophomore Eric Schultz. He has been wrestling tough all season including an overtime loss to #2 Kollin Moore from Ohio State. He is also one of the few wrestlers to get a take down on #1 Bo Nickal from Penn State. He lost to both wrestlers by decision. Schultz is 17-7 overall and 9-5 in duals. Schultz is coming off back to back overtime losses to top ten wrestlers. Leading the way in the Big Ten is Bo Nickal, who will be going for his third Big Ten championship. Nickal is also a defending National Champion at 184 pounds, and pinned #2 Kollin Moore with a cradle in 30 seconds in the Penn State/Ohio State dual. Nickal and Moore are the only returning All-Americans at 197. They are joined by five ranked wrestlers.

The final weight of the weekend will be 285. Nebraska will send out #12 David Jensen. The Junior is 13-2 overall and 7-2 in duals. Jensen got the highlight of his career against Iowa when he had over 4 minutes of riding time in a 5-1 decision over the formerly ranked #3 Sam Stoll. Jensen will be heading into the Big Ten Tournament with extra rest due to Nebraska sending out the junior transfer Christian Lance in their final dual against Stanford. Without a doubt, the man to beat at 285 will be super freshman Gable Steveson from Minnesota. Steveson is undefeated this season and really has not had a close match all year. After him the weight class is wide open. There are four ranked freshman. Joining them, junior Anthony Cassar bumped up from 197 from Penn State and has put together an impressive season as he is currently the third ranked wrestler in the class. There are two returning All-Americans in Sam Stoll from Iowa and Youssif Hemida from Maryland. There are nine ranked wrestlers in this class.

It will be a stacked weekend of wrestling in Minneapolis. The Big Ten leads the way with 78 qualifiers into the NCAA tournament. You could see nine of the ten national champions come out of the Big Ten. 141 has returning National Champion Yianni Diakomihalis from Cornell. First round begins this Saturday at 10am, and can be seen on Flo Wrestling and BTN Plus. All rankings courtesy of FloWrestling.