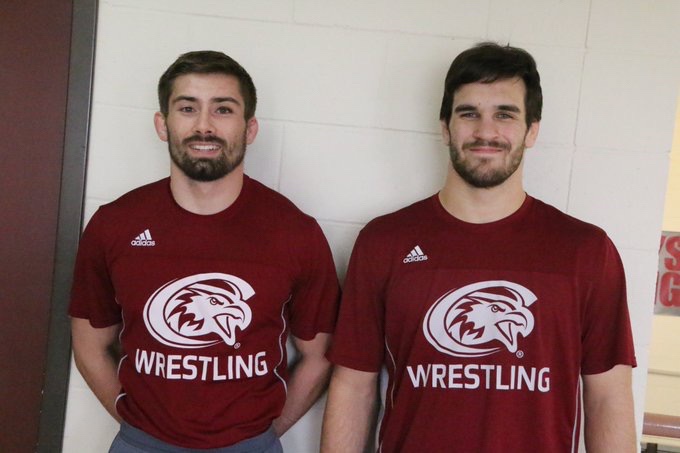 What Brett Hunters young Eagles squad lacks in quantity this weekend, they make up in quality. Wade French and Chase Clasen both won their respective weight classes at the Super Regional tournament to advance to Nationals in Cleveland.

Chase Clasen is a redshirt Junior. He transferred to Chadron State from Iowa Western CC in Council Bluffs where he was a national qualifier for the Reivers in 2017. After redshirting last season, he became an instant impact for the Eagles. Clasen is Currently ranked #11 in D2 by Intermat. At the Super Regional Tournament he won all three of his matches by decision; 7-5, 3-2, and the final 12-8 over Noah Hermosillo from Adams State.  Clasen enters Nationals with a 17-5 record. He will wrestle the #2 seed James Pleski from St. Cloud State in the first round. Clasen handed Pleski his only loss of the season.

The Eagles other national qualifier is Wade French. This year is his first year with the program. French transferred from Western Wyoming CC. Last year French won the 197 pound title in Junior College. Like Clasen, had three decisions that went 5-1, 5-2, and he won his Super Regional championship at 197 pounds 7-3 over Khalil Gipson from Adams State. French will wrestle in the 8/9 match against #10 in the county Nick Baumler from Upper Iowa.

This weekend should be a good stepping stone to next season. The Eagles return a lot of their roster, including French and Clasen. Junior Brandon Kile returns after narrowly missing nationals. He finished in fourth place at regionals. They have also have picked up eight commitments. They include Nebraska natives; Ryder Fuchs from Peirce, Evan Waddington from Wood River, Harrison Gocke from York, and Gavin Peitzmeier from Millard South.

You can follow the DII action on trackwrestling or head to the NCAA DII Championships Page.