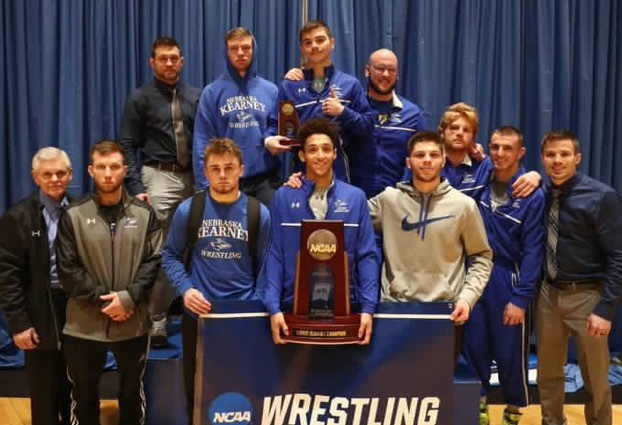 Nebraska-Kearney will head to Cleveland with one goal in mind. National title. The Lopers’ six qualifiers will need solid performances to keep pace with other teams that brought more wrestlers, including defending national champion St. Cloud State. St. Cloud will look to repeat this year with nine qualifiers. McKendree, Lindenwood, and Notre Dame College each have seven. Kearney will have six. The Lopers are boosted by a pair of top ranked wrestlers in Calvin Ochs and Matt Malcolm. They also have #2 Josh Portillo, #5 Jarrod Hinrichs, #12 Wes Dawkins, and unranked, but very experienced Zach Stodden. The Loper six will be looking to bring a title home for the first time in six years. UNK won back to back NCAA titles in 2012 and 2013. They have had 118 All-Americans in D2 and overall have 3 NCAA DII tournament titles. Kearney has a young roster this year, and will return the majority of the starting lineup next year.

Starting off for the Lopers will be 125 pounder, Josh Portillo. He transferred to Kearney after a semester at South Dakota State. Portillo was an All-American last year as a redshirt Freshman. He was 13-7 and finished fifth overall. This season he is 29-6, and heads to Nationals with the third seed. He will face Robert Campos from Notre Dame College in the first round. Should Portillo move on throughout the bracket he would have a likely semifinals match up with 2016 National Champion Brett Velasquez from St. Cloud State. Portillo defeated Velasquez in the second round of the NCAA tournament last season. Velasquez defeated Portillo earlier this season 5-4.

133 pounder Wes Dawkins from Lincoln High is in his first NCAA Division 2 tournament. The Redshirt Sophomore is 24-9 on the season and finished runner up to second ranked D’Andre Brumfield from Colorado State-Pueblo in his regional. Dawkins is the 7 seed and will square off with fellow Nebraska native, John Feeney from Central Missouri. Should Dawkins win, he could have a second round rematch with Brumfield.

The first of two top ranked wrestlers is Matt Malcolm. Malcolm is 25-5 on the season. He transferred to Kearney after his Freshman season at Iowa. Last year in his first season with the Lopers, he went 21-7 and was an All-American after finishing fourth overall. He won his regional in dominant fashion, winning his quarterfinal and semifinal matches by tech. fall. and winning his 157 pound final by major decison 13-4 over Skyler Lykins from Colorado School of Mines. He will be the top seed at Nationals, wrestling Nick Boggs from Lake Erie in the first round. Boggs will be a tough first round draw, he is 30-4 on the season and currently ranked 7th by Intermat.

The other top ranked wrestler for the Lopers is redshirt Senior Calvin Ochs. Ochs transferred to Kearney by way of Colby CC. He was a runner up at 165 pounds in Junior College. He has continued to roll at Kearney. As a Sophomore he was 24-6 and finished fourth at 174 pounds to earn All-American honors. His Junior campaign, he was back down to 165 pounds. He went 27-6 and again finished fourth place for his second All-American finish. Ochs will look to improve his finish this year. He was undefeated all season before dropping his regional final to Koery Windhalm from Adams State in sudden victory. Ochs is 12-1 now as he enters nationals. He will be the six seed and wrestle Freshman Nick Giantono from Newberry. Giantono is 13-15 on the season.

Redshirt Senior Zach Stodden will be heading back to Nationals for a third time. He is looking to go three for three, and become a three time All-American. as a redshirt Sophomore, Stodden went 30-13 finishing in seventh place at 184 pounds. The following season he was down to 174 pounds. He went 32-15 and finished in eighth place to garner All-American honors again. This season Zach is 14-12. He finished runner up at regionals to top ranked Brandon Supernaw from Western Colorado. Stodden will head to nationals and square off with the second seed, Kolten Eischens from St. Cloud State in the first round. They did not meet when the two schools dualed earlier this season.

The final competitor from Kearney will be Heavyweight Jarrod Hinrichs. Hinrichs is a redshirt Junior from Fillmore Central HS in Geneva, Nebraska. Hinrichs is heading to Nationals for the second time in his career. Last season he was an All-American finishing in eighth place. He has continued to grow and be a steady hand in the Lopers lineup. This season he is 32-7 and was third place at regionals. He won four straight matches on the backside, winning the third place match over James Romero from Adams State by major decision, 17-5. Heading into nationals, he will be the fifth seed. He will wrestle Jacob Robb from Mercyhurst. Robb is 30-11 on the year and currently ranked one spot behind Hinrichs at #6.

Division two nationals will take place Friday and Saturday, March 7th and 8th. Wrestling begins on Friday at 10am. They will be held in Cleveland, Ohio at the Wolstein Center on campus of Cleveland State University. You can follow along on Trackwrestling.com or head to the NCAA DII Wrestling Championships Page for links to the live stream and stories.