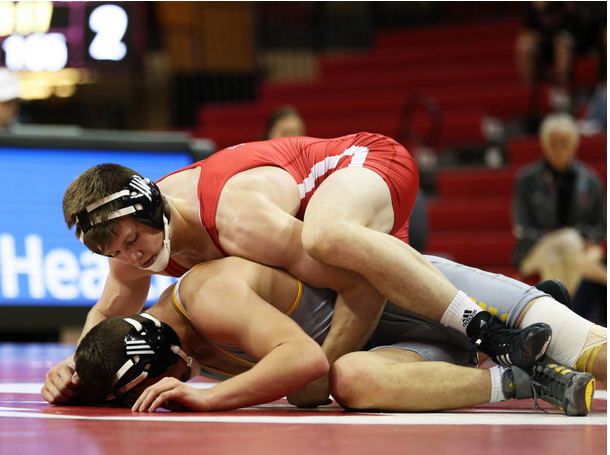 Those in attendance Saturday afternoon were glad to have made the trip. The Huskers got out to big lead early and never looked back. They were able to pick up five bonus point wins Saturday. Two pins, two tech falls, and a major decision paced the Huskers.

They day started at 174 pound as #9 Mikey Labriola came out with his hair on fire earning a decisive 18-5 MD over Stanford’s Rico Stormer. #6 Taylor Venz rode that momentum going into the 184 match as he made quick work of Nainoa Calvo, pinning him at the 1:01 mark.

Stanford was able to put together a string of wins starting at 197. It was the matchup of ranked wrestlers as #13 Eric Schultz squared off against Stanford’s #12 Nathan Traxler.  Schultz gave a great effort, but a five second riding advantage sealed the victory for Traxler, as it went to criteria after three tie breakers. Following Taxlers big win, Haydn Maley came to the mat for Stanford. Christian Lance got the nod at 285 for the Huskers against Maley.  The Fort Hays St transfer wrestled well, but dropped a 6-4 decision.

Nebraska was able to water down any momentum Stanford had as #16 Zeke Moisey had a great end to his time at Devaney by earning a decisive 4-1 victory over #20 Gabriel Townsell in the 125 pound match. Stanford got their final win of the day at 133, Nebraska true freshman, Jevon Parrish did his best to fight back after being taken down early, ultimately dropping a 5-2 decision to Mason Pengilly.

Nebraska ended their day with in dominating fashion. Starting out with #20 Chad Red, he flashed brilliance at 141.  A dose of acrobatics leading to a quick cradle earned Red the 1:30 pin over Anthony Le and brought the home crowd to their feet in applause. At 149, Jordan Shearer kept the bonus points rolling as he notched a 15-3 MD over Steven Abbate. It was Shearers final match at Devaney. He has decided to forego his Senior year. He has been accepted into medical school at North Dakota. #2 Tyler Berger also ended his time at Devaney with a win, as the Senior earned a tough 2-1 decision over Dominick Mandarino.  The win was Berger’s 22nd of the year and put him inside of the top 15 all time wins list at Nebraska. The final match of the afternoon ended in magnificent fashion as #6 Isaiah White continued his dominance at 165.  White scored early and often earning a 21-4 Tech Fall over Jared Hill.

The Husker grapplers sent off their seniors in style with a dominating 31-9 dual victory.  This win leads them in to a two week break before the Big Ten Championships take place in Minneapolis, MN (3/9-3/10).  You’ll be able to follow the action on BTN Plus and BTN.

Stay tuned for an in-depth preview of the conference tournament, and as always, Go Big Red!