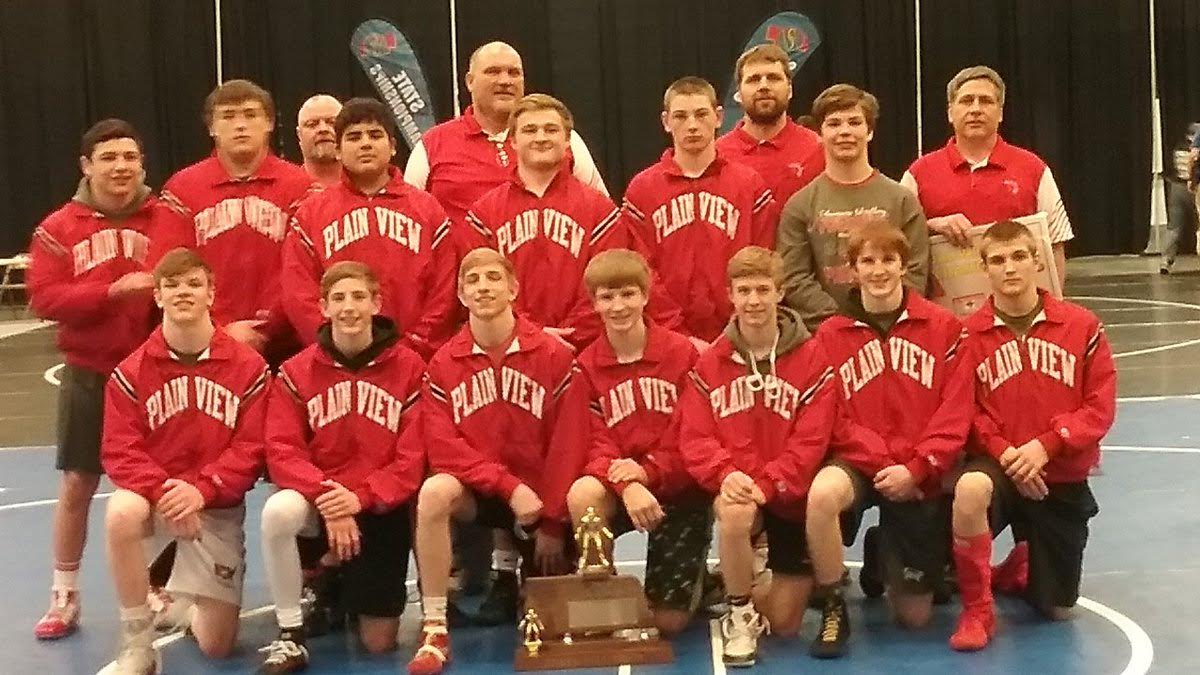 Look for a really exciting team race in Class D this weekend in Omaha. Right now, the top two teams look to be really close when figuring points. Archbishop Bergan is projected to put four guys in the state finals looking at brackets, and accumulate two more medals on the backside. Plainview is projected to have 2 finalists and 5 medals from the backside. Amherst could become a factor in the team race with a good quarterfinal round on Thursday morning. If they could get a couple guys through some tough quarters and into winnable semifinal matches, it would go along way into helping their cause in the team race.  They are projected to have 1 finalist and 5 other medalists come through the backside. Mullen is projected to get 2 finalists and 2 medalists off the backside. They could also get a boost in the team race if they could win a couple tough quarters matches that would put their wrestlers in the driver seat to make the state finals. Also, if Ty Kvanvig is healthy enough to get a medal, that will help there chances as well. Burwell had a great district tournament and proved that as defending Class D State Champions, weren’t going to go down without a fight. They are going to need some guys to really step up this weekend if they want to defend their title. They need guys like Coy Gideon and Colten Dawe to really come up clutch for them this weekend and get state medals.

Top Half:Hunter Bennett of Elkhorn Valley and Logan Russell of High Plains look to be the favorites to make the state semi finals. Russell will be looking to make his way into the finals for the third consecutive year.

Bottom Half:Undefeated Freshman Samuel Foster of Sutherland and Eli Lanham of Plainview should be a great quarterfinal.  The winner will likely get Jesse Sauceda of Shelton in the semifinals. Lanham beat Sauceda at the Amherst invite earlier this year, and is projected to meet Russell in the finals.

Top Half:The quarterfinals at this weight should be really good. On the top half, we should see Teven Marshall of Mullen versus freshman Brenner McLaughlin of Thayer Central and Cayden Ellis of Windside vs Cameron Wilkinson of Neligh Oakdale. If Mclaughin can beat Marshall in the quarters, he would likely draw Wilkinson, who he beat in state duals semis. It feels like this may be a Wilkinson/Marshall semi final though.

Bottom Half:Scout Ashburn of Plainview has met Wilkinson of Neligh a couple times this year splitting matches with him. This time, he gets to take a shot at Wilkinson’s teammate Brock Kester. The other quarterfinal should give us Nathan Murrilo of Morril vs Caden Arps of Archbishop Bergan. Arps has beat Ashburn a couple times this season, and is the favorite to meet Marshall in the state final.

Top Half:This weight is going to be awesome all weekend long. There will be a ton of close matches. This is easily the deepest weight in class D, with 7 guys who currently have at least one medal from the state tournament. There is going to be a really good match right off the bat on the top side with freshman Cyrus Wells of Anselmo-Merna and returning medalist Koby Smith of Elm Creek. If Wells wins that match, it puts him against a familiar opponent in Jeremy Larson of Brady in the quarters. Wells beat Larson 2 times earlier this season. If Wells wins that, he would get the winner of returning state finalist Koby Ellis of Winside and returning state medalist Shaye Wood of Central Valley. Wells has also beat Wood a couple times earlier this year, and was in the same district as Ellis. Both Ellis and Wood lost to Isaiah Shield at districts who is on the bottom side. Wells is the pick to make the state finals from this side.

Bottom Half:If the top half wasn’t good enough for you, here is the look at the bottom side. First round we get returning state finalist in Tyler Nagel of Morrill versus returning state medalist Tate Phillipps of Burwell. The winner of that gets Isaiah Shields of Amherst in the quarterfinals, and the winner of that gets returning state champion Zach Hamilton of Archbishop Bergan in the semifinals. Shields and Hamilton are the picks to make the semis and that match could go either way. Hamilton is still the champ until someone proves otherwise, and is the pick to meet Wells in the state finals.

Top Half:Escalante of Winside and Gideon of Burwell should be a good first round match on the top half. Escalante beat Gideon at the state duals last weekend.  Nate Christensen of Plainview made the late season drop to 126. He should meet Ruger Reimers of Palmer in the semis.

Bottom Half:  Belvins of Weeping Water and Palmer of North Central is an interesting match in the first round. The winner gets returning state runner-up Casey of Thayer Central in the quarters. Casey and Quentyn Frank of Amherst should meet in the semis. Frank has beat a common opponent of Casey and is the pick to make the state finals from the bottom side.

Top Half:The top half of this bracket is loaded with the 2-5 ranked guys all included. Also, throw Dustin Klingsporn of Axtell (41-7) into the mix on this side. The first round match between Pokorny of Central Valley and Eggleston of South Loup should be really good opening round match. The winner gets Klingsporn in the quarters. The other quarter final on this side should give use Herley of Neligh versus Gracey of Mullen. If Eggleston and Herley should get through those and meet in the semis, Eggleston would look to beat Herley for the second time this season.

Top Half:This is another weight where the topside is extremely tough. The quarterfinals should put Lewis of North Central versus Laible of West Holt and Ostrom of Burwell versus Lovitt of Mullen. Lewis and Laible have split matches this season. Laible and Ostrom are the picks to make the state semis. Ostrom has beat Laible head to head this season and should be making another trip to the state finals.

Bottom Half:This half sets up nicely for Enrique Martinez to make the state finals. He will have to go through most likely Calleroz of Arcadia Loup City in the quarters, and Escalante of Winside in the semis.

Top Half:The match on the topside with Riggs of Maxwell and Coons of Twin Loup right out of the gates is interesting.  Riggs is so dangerous, that he is a safe bet to make the finals off this side. His path will likely go through Schmit of Randolph in the quarters, and Gunning of Plainview in the semis.

Bottom Half:A good match out of the gates on this side is Vondra of Elkhorn Valley and Guerrero of Southwest. The winner gets Florell of Amherst in the quarters.  Another good matchup in the opening round on the bottom side quarter is Holthus of Garden County and Clouse of Elwood. The winner gets Johnson of Archbishop Bergan in the quarters. Johnson is the predicted semifinal winner, making his first trip to the state finals.

Top Half:Garcia of Morrill will look to defend his title from a year ago at this weight. His path likely goes through Ebert of North Central in the quarters, and Coons of Twin Loup in the semis. Coons will have to get through Racicky of Ansley/Litchfield in the quarters.

Bottom Half:White of Sutherland will try to make the state finals to revenge a district loss to Garcia. White will have to get through Bloomquist of Randolph in the quarters, and the winner of Stokebrand of Amherst and Schutz of Elwood in the semis.

Bottom Half: Simants wants to get the finals and prove he is the best at this weight class by beating McFarland for a second time this season. His road to the finals likely goes through Polen of North Central in the Semis and Mejia of Plainview in the quarters. Polen will need to beat Peterson of Elkhorn Valley in the first round and the Feulner of Thayer Central in the quarters in order to reach the semis.

Top Half:This side could give us some really interesting match ups and surprise winners. Zimmerer looks like the favorite to make the state finals. His path will go through the Potts of Amherst and Mundt of Nebraska Christian in the Semis and McGill of North Platte St. Pats in the quarters.

Bottom Half:This side looks a little cleaner for Scott to get to the finals. Scott will need to go through McCurdy of Alma in the quarters and Haussermann of Franklin in the semis.

Top Half:The nice thing about this bracket is the top guys are really spread out so it’s going to make for really good quarterfinal and semifinal matches. Running Hawk won his district but got the toughest draw possible. If he could win that match, he puts himself in a pretty decent spot to get in for a medal. Dawe of Burwell looks to be the finalist from this side of the bracket. His road is going to run through Russell of Alma in the quarters and Villwok of Archbishop Bergan in the semis.

Bottom Half: Much like the top half, the bottom is going to have really good quarterfinal matches and a good semifinal. Horejsi of Howells Dodge is the pick to make the finals on the bottom side. His road will go through Mozena of Weeping Water in the quarters and Baptista of Friend in the semis.

Top Half:The arguably two best guys at this weight are on this side of this bracket.  Also another tough guy on this side is Ty Kvanvig of Mullen, but he doesn’t appear to be fully healthy. Hunter and Gale probably should be a finals match but they should battle it out in the semis. Hunter will need to beat the winner of Jackman of Ainsworth and Jensen of Howells Dodge in the quarters. Gale will have to beat Kvanvig first round and the most likely Pickrel of Fullerton in the quarters. Hunter is the pick to make the finals and win this weight class.

Top Half:This weight is really wide open after Schuyler Brown of Overton didn’t compete at districts. The new favorite at the weight, Hassett of Mullen sits on this side. Hassett will most likely need to get through Rosenkrans in the quarters, and either Throener or Taubenheim in the semis.

Bottom Half:Cone of Archbishop Bergan is the favorite to make the finals off this side of the bracket. He will likely need to get past Williams of Laurel-Concord-Coleridge in the quarters and Nozle of Clearwater/Orchard in the semis.

Top Half:Cave of Weeping Water upset Buss of West Holt in the district final and the ends up on the same side of the bracket as Jerabek of Arcadia Loup City. Jerabek is the favorite to win the weight class, but he will need to get by Peed of Clearwater/Orchard in the first round, Sciortino of Garden County in the quarters and Cave in the semis.

Bottom Half: Crazy to think a district loss can help you out, but it just may have for Buss of West Holt. He is the favorite to make the finals but doesn’t have an easy road there. He opens up on Thursday with 5th ranked Cameron Nelson of Plainview and then get 4th ranked Martin of Overton in the quarters. If Buss wins those two matches, he likely gets Kircher of Southwest in the semis. Kircher will likely need to beat Kerwood of Meridian in the quarters to get there.

One thought on “2019 Class D State Tournament Preview and Predictions”