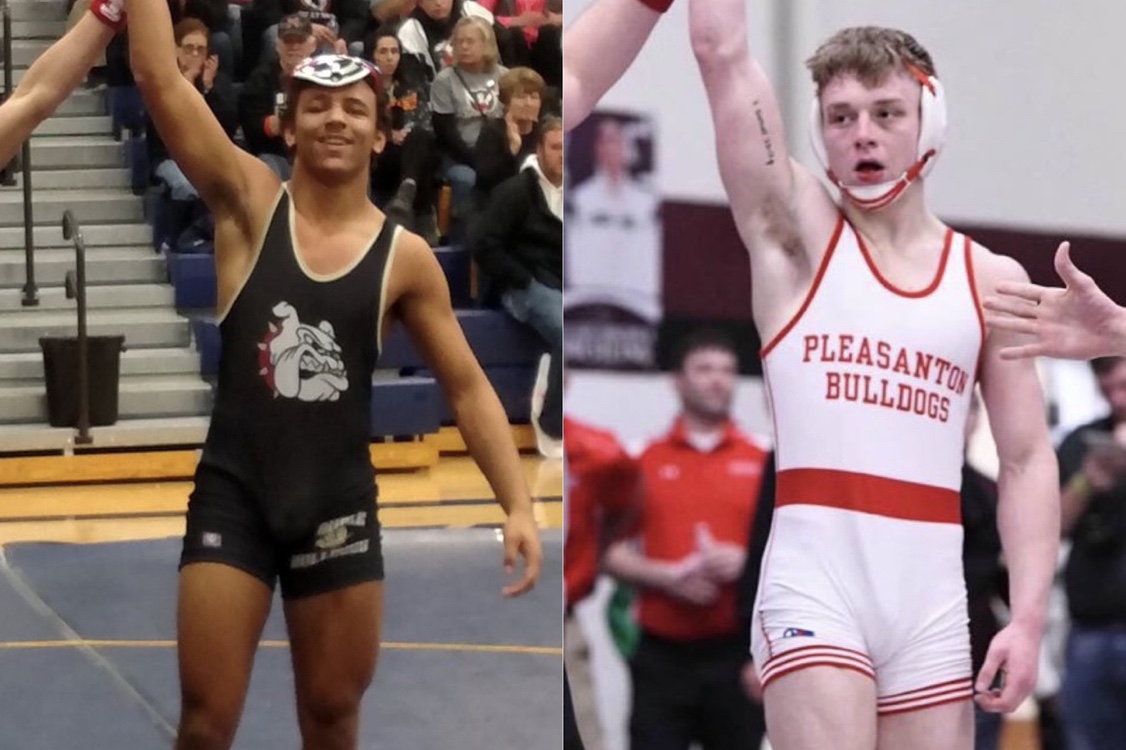 Tyler Pawloski (Pleasanton) Senior – D132
As a freshman Pawloski won his first round match at the state tournament by one point! Three matches later he was a freshman state champion after an overtime win in the finals to be come only the second state champion in school history. His sophomore season he developed a nice rivalry with Burwell’s Joel Ostrom. He won a 4-3 state finals match against Ostrom that year. Last season he won by major decision in the state finals over runner-up Keegan Casey. This year his road to a 4th state title will be on the opposite side of the bracket from the 2-4 ranked wrestlers. Pawloski will be continuing his athletic career playing football at Hastings College in the fall.

James Burks (Omaha Burke) Senior – A160
Most wrestlers battle their brother(s) in the living room to prepare for competition, but Burks had to beat his brother to win his first state title. Burks posted 52-3 records both  his freshman and sophomore seasons on his way to the A132 and A145 titles. Burks won the A160 bracket as a junior with a 51-3 record. Burks also made the same Greco World Team as Moomey and competed in the World Championships overseas, along with Fargo and many other Freestyle/Greco tournaments. Burks will continue wrestling at the next level at Northern State.

Logan Russell (High Plains) Senior – D106
After coming up one match short of a medal his freshman season, Russell jumped levels his sophomore year to the tune of a 51-2 season and a 6-1 win in the state finals. As a junior his closest match of the whole season was four points. He cruised to his second state title with a first period pin in the finals. He has survived a few tough tests this season, most notably a 3-2 win over #2 Eli Lanham from Plainview in the district finals. That one could be a preview of the state finals match on Saturday.

Phillip Moomey (Kearney) Senior – A132
Moomey is looking for his 3rd state title, after finishing 5th as a freshman at the brutal  A113 weight. Moomey has steadily improved each year thanks to his year-round training and competing. He won the A120 bracket as a sophomore and the A126 bracket as a junior. Moomey made a Greco World Team last summer and has competed overseas multiple times. He has competed at just about every national tournament there is for high school aged wrestlers. He will compete for Cornell University in the fall.

Gage Krolikowski (Valentine) Junior – C132
Valentine’s Gage Krolikowski pinned his way to a state title as a freshman at C113. Last season he won a tight 3-2 match in the semifinals over Lee Carlson from Sutton before winning by fall in the finals over Broken Bow’s Spencer Gaffney. This year he enters the state tournament 37-0 with very few matches going the distance. He will look to cap an unbeaten season with his third state title and be the lone senior next year going for four.

Trey Arellano (Sidney) Senior – B138
After finishing 3rd as a freshman Arellano has claimed back to back class B state championships. As a sophomore he avenged his state semifinal loss from the prior season with a 4-2 win in the state finals over Walker Moore. Last year in the state finals he won 1-0 over district rival Mario Ybarra. This year, barring any upsets, he will be on a collision course with Omaha Skutt’s Nicholas Stoltenberg. Stoltenberg is chasing three titles himself as he was a state champion last year as a sophomore, defeating Arellano’s teammate Kaden Vowers 5-4 in the ultimate tie breaker.

Chance Fry (Lincoln East) Senior – A152
Like Moomey, Fry was also in that brutal A113 weight his freshman year. Fry finished 4th at state. They met three times their freshman year, with Moomey winning tight 8-6, 7-5 and 4-3 matches. Fry won the A132 bracket as a sophomore, and the A145 bracket as a Junior. Fry has done a fair amount of off-season wrestling throughout his high school career, and will compete for Iowa Western Community College in the fall.

Caleb Long (Valentine) Senior – C160
After not placing as a freshman at 132, Caleb Long jumped up three weight classes to 152 lbs and won a state title as a sophomore with a 4-3 win over Jack Keating from Kearney Catholic. Last year as a junior he won one of the highlight weights in class C that featured two other state champions (Zach Borer and Kyle Petree). This year Long is a perfect 33-0 and will look to add a third state title to his collection. He is signed to wrestle for the Iowa State Cyclones next season.

Joseph Reimers (Aquinas) Senior – C182
Reimers finished third as a freshman at the upperclassmen heavy 170lb weight class. He has been nearly unstoppable since that point. He lost just twice as a sophomore and won a 4-3 finals match against Cody Thomas from Wakefield. He had a perfect season last year capturing a state title by fall in the finals over Ethan Poppe from Crofton/Bloomfield. This season, the unbeaten Reimers has broken the state record for takedowns in a year and sits at 452 heading into the state tournament. He will be wrestling for the Nebraska-Kearney Lopers next year.

One thought on “Making History”