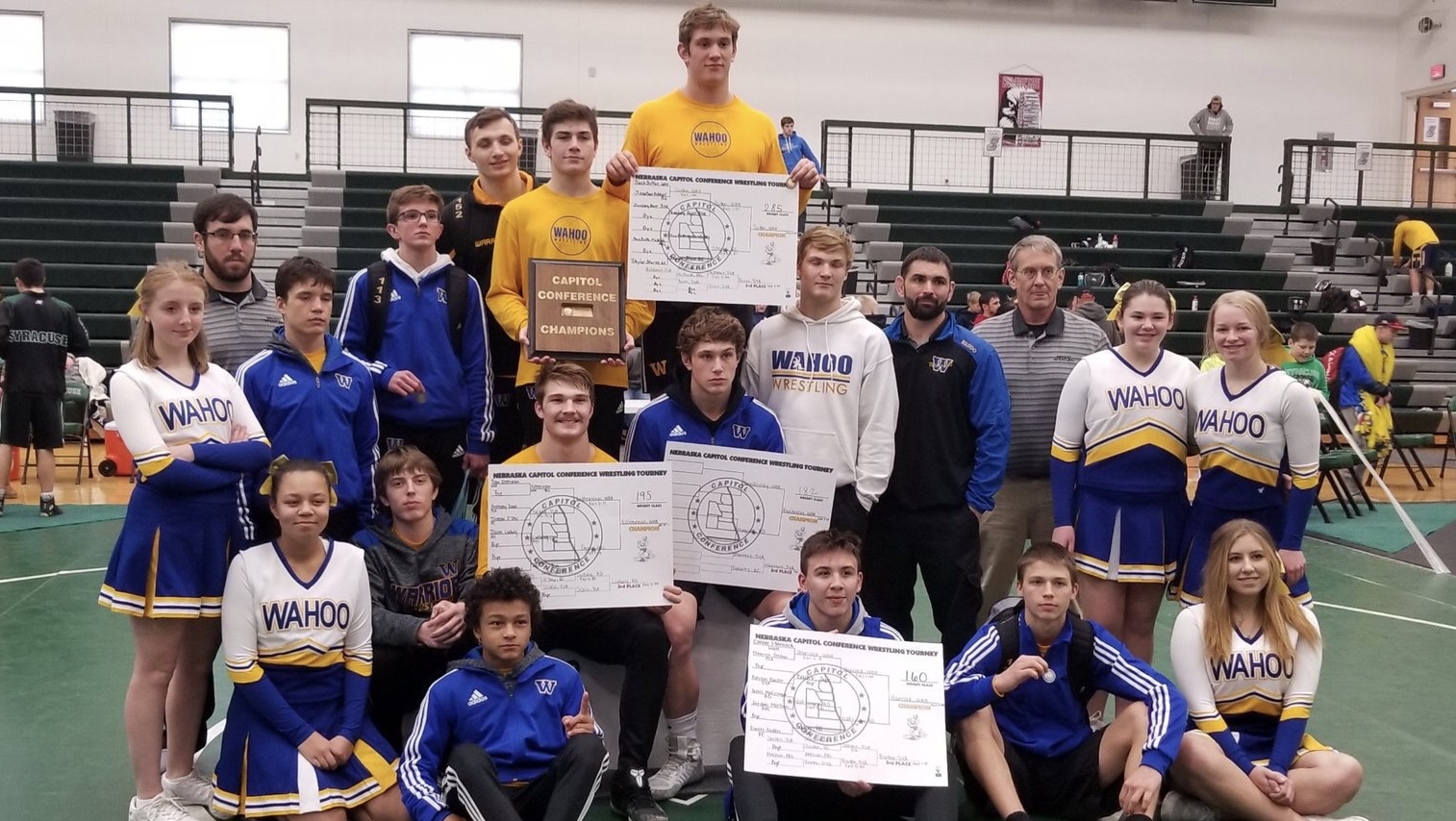 At the beginning the season, Skutt looked like the favorites to repeat as team champions. As the season wore on, the dents in the Skyhawks’ armor started to appear. When all was said and done with districts, the Skyhawks only qualified five for the state tournament and it is looking like Class B will have a new team champion in 2019. Teams like Hastings, Wahoo, Sidney, Northwest, and Columbus Lakeview all showed they have the firepower and depth to stand at the top of the podium. It is likely the Class B team champion may only need around 100 points to claim the title.

106
Top Half:
This side of the bracket features three ranked wrestlers, in #2 Arends (Northwest), #4 Ourada (Skutt), and #6 Munier (Sidney). Arends are Munier should meet in the quarterfinals, with the winner likely facing Ourada in the semis. Munier did defeat Arends back in mid-January.

Bottom Half:
#1 Chavez (Gering) looks to be in great form and should face #5 Rainforth (O’Neill) in the top quarterfinal. On the lower side, #3 Svoboda (Aurora) should meet up with Bailey (Blair) in the quarters. Bailey bested Svoboda in December so nothing is out of the question.

113
Top Half:
#1 Garcia (Scottsbluff) continues to be on a tear and should easily advance to the semifinals to the top side. On the bottom side, the first-round matches should provide some great entertainment. Ivey (York) versus Maher (Auburn) winner will face-off against either #3 Ruffin (North Platte) or #6 Mass (Ralston). Ruffin took some unexpected losses in districts, while Mass blew through B1. Look for a Garcia vs. Mass semi-final.

Bottom Half:
Four very talented wrestlers fill this half of the bracket with #2 Russman (Cozad), #4 York (Beatrice), #5 Obermiller (Adams Central) and Zeckser (Hastings). All four are very capable of coming out on top on this side, and one of them will not medal. Anticipate a York verses Russman match-up for a chance to walk in the parade on Saturday. Also, keep on eye on Templar (Blair). He has had an impressive couple of weeks, and could wreck this side of the bracket.

120
Top Half:
#4 Ruff (Alliance) looks to be the top wrestler on the upper half of this side. He will face the winner of Jaqua (Wayne) and Sandoval (Conestoga) in the quarters. On the lower half, the Fries (Northwest)/Miller (Hastings) winner will have a tall task against #1 Nielsen (Blair). Look for Nielsen to reach the finals without too many bumps.

Bottom Half:
If you are a wrestling fan looking for early entertainment, tune into the quarterfinal match between #2 Arnold (Beatrice) versus #3 Kunz (Central City). Kunz will be looking to keep his undefeated streak alive, but he hasn’t faced the caliber of opponent this year that he will see in Arnold. It’s a toss up match that could go either way. The winner of this match will likely face #5 Lomax (Boys Town), if he can get by Bailey (Lexington).

126
Top Half:
#3 Lazure (Skutt) should run into the semifinals without too many issues on the top side. On the lower side, look for a #2 Rocheleau (Gering) versus #3 Quandt (Northwest) match-up in the quarters. Whoever comes out on top, will have their hands full with Lazure who appears to be performing at a very high level.

Bottom Half:
Can #1 Diaz (North Platte) go wire-to-wire as the top wrestler in this weight class? He will have to get by the winner of #3 Brown (Hastings) versus #6 Perry (Lakeview) match in the semis. Brown defeated Perry at the state duals and looks to be recovered from his injury.

132
Top Half:
Predicting this half of the bracket, and this weight class for that matter, is like picking the winning lottery numbers. Chances of getting it right are slim. #5 Brandenburg (Central City) faces Fago (Lexington) in the first round, in what should be an interesting match-up. Fago has defeated ranked wrestlers this season, and should give the returning state champ all he wants. The winner will face #3 Kluck (Aurora) in the quarters. Kluck seems to have a knack for winning these types of matches. On the lower side, Talmadge (Ralston) made some noise at districts and will likely face Hotz (Gothenburg) in the quarters. Hotz seems to be wrestling well right now and should advance to the semis.

Bottom Half:
Again, almost impossible to call this half. On the top side #6 Hunsley (Hastings) should meet Stokey (Ogallala) in the quarters. Hunsley seems to be peaking at the right time and should advance. On the lower side, #2 Hernandez (Scottsbluff) should meet Martin (Seward) in the semifinals. Hernandez is likely to be Hunsley’s opponent in the semis.

138
Top Half:
Look for #3 Vergara (Wayne) and #5 Lemburg (Lakeview) to meet up in the quarterfinals on the top side, with the winner facing #1 Arellano (Sidney). Arellano looks very tough again this year, and will be a tough out for either Vergara or Lemburg.

Bottom Half:
#4 Brumbaugh (Hastings) has put together a great season and should advance to the semis. He will likely face Roman (Schuyler) in the quarters. On the lower side, #2 Stoltenberg is the clear favorite to advance, and is likely going to advance to the finals.

145
Top Half:
#1 Gutierrez (Scottsbluff) is another wrestler looking to go wire-to-wire this season. He should advance to the semis, where he is likely to face #2 Adams (Nebraska City). Adams has had a tremendous season, so it should be a great match Friday night.

Bottom Half:
This half of the bracket is a little more complicated to predict, with #3 Berry (Lexington), #4 Zink (Ogallala) and #6 Albrecht (Raymond Central) all on this half. Albrecht seems to be hitting on all cylinders right now, and will lock horns with Berry in the quarters, with the lean going to Albrecht. On the top side, Zink has had a great freshman year and should advance to the semis.

152
Top Half:
Four ranked wrestlers dot this half of the bracket, making it one of the most intriguing of all the brackets in Class B. The quarters should look like this – #5 Hoffmaster (Cozad) versus #1 Canoyer (Waverly) and #6 Pursley (Aurora) versus #4 Core (Seward). Look for Canoyer and Core to meet in the semis, with the advantage going to Canoyer.

Bottom Half:
Not as much drama on this side, and #2 Gocke (York) should continue his dominating season and advance to the semis. The same goes for the lower side, where #3 Bennett (Wahoo) should advance. Gocke seems to be on a mission this year and should be in the parade.

160
Top Half:
#1 Gernkensmeyer (Lakeview) should meet up with #4 Arensdorf (North Platte) on the top side of this half. Gerkensmeyer has had a tremendous season and should advance to the semis. On the lower side look for #5 Lemmon (Chadron) to meet More (Central City) in the semis, with the nod going to Lemmon.

Bottom Half:
#3 Kopf (Lexington) and #2 Yrkoski (Schuyler) are headed for a collision course in the quarters. Yrkoski got the better of Kopf at the state duals, but Kopf rebounded with a district championship. The winner should face Hancock (Wahoo) should he be able to get by Robb (Sidney) in the first round.

170
Top Half:
#2 Canoyer should rebound from his first loss of the season in the district finals and advance to the semis without much trouble. The winner of the first-round match-up between #3 York (Fairbury) and #4 Fehlhafer (Seward) should be Canoyer’s opponent. Canoyer will be favored over either wrestler in that
match.

Bottom Half:
Undefeated #1 Damen Pape should continue his dominating season and advance to the parade of champions on Saturday from this half of the bracket. Look for #5 Jayden Wooten to be his semifinal opponent.

182
Top Half:
#1 Jansen (Skutt) is the favorite to win this weight class, as he has defeated every wrestler, he has faced at this weight class this season. The winner between #4 Bordovsky (Wahoo) versus #6 Langan (McCook) should be his semi-final opponent.

Bottom Half:
There’s plenty of intrigue to go around on this half of the bracket. On the upper side, Lyons (York) and #2 Frenzen (Lakeview) should meet in the quarters. They have split their match-ups this year. #5 Riesen (Chadron) and #3 Firmanik (Fairbury) should meet in the other quarterfinal. Look for a Frenzen and Firmanik match-up in the semis.

195
Top Half:
#2 Griess (Northwest) is the clear-cut favorite on this half of the bracket, as his only loss is to an out of state wrestler at The Clash. Look for him to face off with the winner of Lomax (Crete) and Munoz (Holdrege) in the semis.

Bottom Half:
#1 Kolterman (Wahoo) has more potential hurdles on this side than Griess does on the top half. In the opening match, Kolterman will face off with #5 Rutcosky (Blair). Kolterman should reach the semis and meet the winner of #3 Meyer (Norris) and #4 Rader (Plattsmouth).

220
Top Half:
#1 Maganda (Schuyler) should advance the semis, where he will likely face #3 Menke (Bennington). Maganda has a perfect record this season, and his athleticism will continue to create issues for anyone at this weight.

Bottom Half:
On the top side, the two first round matches could be toss-up matches. #6 Wright (Boys Town) and #3 Kiser (Northwest) should both advance, but don’t write either of them in just yet. Both of their opponents are going to give them fits. Kiser has the experience and should advance to the semis. He will likely face #2 Pfeifer (Plattsmouth), as Pfeifer is as athletic as anyone at this weight. Should Maganda and Pfeifer meet up in the finals it will be worth the price of admission.

285
Top Half:
This half of the bracket is absolutely loaded! #6 Nielsen (Plattsmouth) and #4 Brown (Waverly) should meet up in the quarters. Brown is an absolute beast as a freshman and his only two losses are to #1 Sutton (Wahoo). Brown should be able to advance to the semis. On the lower side, #2 Wurth (Lexington) and #3 Stafursky (York) are on a collision course for a rematch of the conference finals. Wurth got the best of Stafursky that day, and Wurth’s athleticism should carry him again. Brown should be favored against either Wurth or Stafursky.

Bottom Half:
#1 Sutton with a 42-0 record is the wrestler to beat at this weight, and he should win this half of the bracket. Stallbaumer (Cozad) made a splash at districts by beating Wurth. The winner of the quarterfinal match between Stallbaumer and Martinez (Northwest) will be Sutton’s semi-final opponent.

One thought on “2019 Class B State Tournament Preview and Predictions”