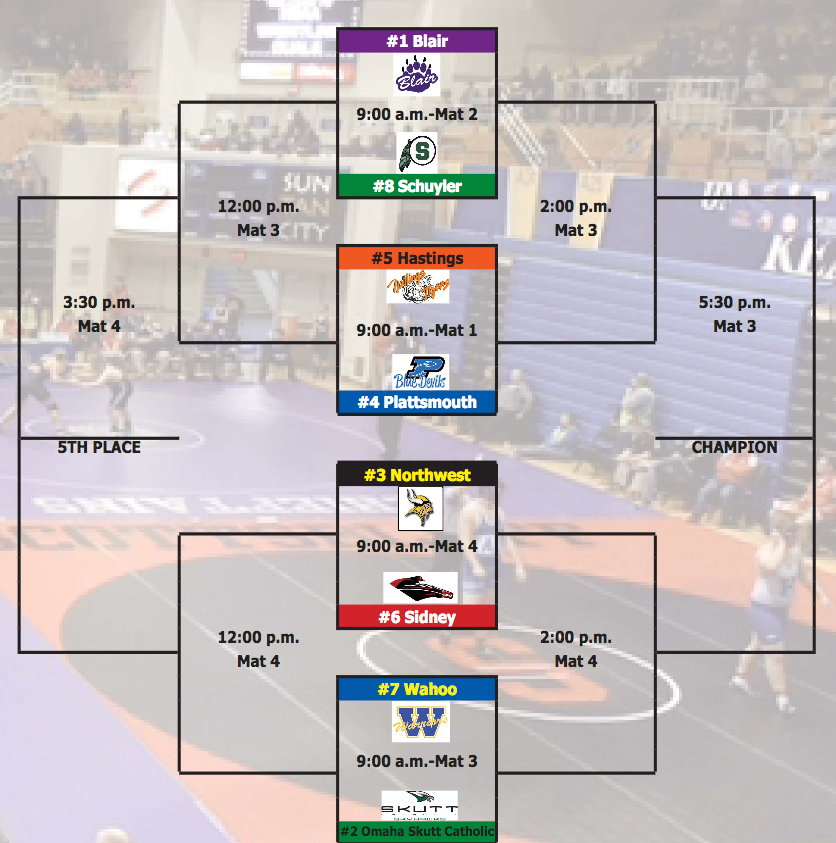 The 2018 Class B State Duals have the making to be one of the better State Dual tournaments in recent history. This year’s tournament is littered with talented wrestlers. The eight teams competing boast a total of 69 state qualifiers and 30 state medalists. As with any wrestling dual, match-ups and bonus points are critical to winning. This year multiple teams could be crowned 2018 Class B State Duals champions.

In past years there are typically top wrestlers from various teams who are not in the lineup for State Duals. There are several reasons for that, but those teams missing wrestlers can drastically impact the results of the dual matches. To keep things consistent teams’ district lineups and any prior matches between them will be used to determine a projected winner for the duals. Keep in mind that lineup shifts may occur to strengthen lineups and add points that could shift the dual in another team’s favor, but that is not accounted for unless mentioned.

Blair and Schuyler were both at the Boys Town Invite at the beginning of December so there is some familiarity between these two teams. Blair dominated their district tournament, while Schuyler finished a respectable third behind Hastings and Northwest. Blair looks to have the upper hand in this dual and could win up to nine of the matches. Blair will be favored from 106 thru 132 and should Blair win those matches it will be tough for Schuyler to overcome.

This dual is the most intriguing of all the first-round match-ups based on the emotions of these two teams. The Tigers had their eyes set on the gold in Omaha and after finishing tied for fourth, Coach Weidner is likely using it as motivation for his team. Plattsmouth had a solid district tournament, sending ten to Omaha. Head Coach Goecke has announced that he is not returning next season for the Blue Devils, and the effects of this on the team during the State Duals is still to be determined. Hastings strength is in its lower weights and could easily win up to 10 matches on their way to a dual victory.

Northwest and Sidney met earlier this year at the UNK Midwest Duals, with Northwest coming away with the 51-28 victory. Not much has changed with either team from middle of January until now, so this dual looks to have a similar feel. The Vikings are coming off a great state tournament finishing in 2nd place – tying the highest finish in school history. Sidney had a solid State tournament finishing tied for 4th and crowned two state champions. The Vikings are a strong dual team and the score should be similar to their last match-up. Sidney will make up some ground in the middle weights, but the strength at the bottom for the Vikings should propel them to victory here.

Earlier this season Omaha Skutt and Wahoo dualed at the Bennington Dual tournament, with Wahoo coming away with a 50-22 win. At the time, many began to wonder what had happened to the Omaha Skutt we all knew. However, when districts came around Omaha Skutt was back to full strength and rolled thru their district and stood atop of the podium with the team trophy in Omaha. Unlike earlier this year, Omaha Skutt should win this dual. Bonus points will certainly be at a premium and Wahoo could keep it close if they are able to score those bonus points in the matches they are favored.

If the Blair vs. Hastings match-up comes to fruition, this will be one of the better duals of the day. On paper, these teams match-up very closely, meaning bonus points will be very important. In looking at the line ups from districts, swing matches likely will come at 145, 152, and 285. Whichever team carries these matches should win the dual. Hastings is poised to perform better this weekend and should take this dual. Brown at 113 and Hunsley at 126 will keep their matches close and may even come out on top. Combine those matches with another swing weight or two and the Tigers should win.

Like the other projected semi-final, this dual has the makings of a great dual. If Omaha Skutt is healthy, they will push Northwest and should come out on top. Northwest is one of, if not the strongest dual team in Class B. Of the six Vikings who did not qualify for state, many of them can win the “50/50” matches. In looking at the line-ups, the swing weights will come at 106, 113, and 182. Omaha Skutt had state qualifiers at all these weights, while Northwest did not qualify their 106. The team that takes more of these swing matches should be the dual winner. Omaha Skutt looks to have the ability to take more of these swing matches, which will move them into the finals.

Earlier this year Hastings took down Omaha Skutt in a dual 49-19. At the time, both teams were missing a strong wrestler – Brown at 113 for Hastings and Van Dyke at 160 for Omaha Skutt. If this dual takes place, it will come down to Hastings motivation after a less than desired performance in Omaha versus the confidence and momentum that Omaha Skutt brings in after taking the team title last weekend. As with most great duals, this one is likely to come down to bonus points. There will be some great match-ups if the line-ups don’t change. Keep an eye on 113 – Brown vs. Lazure, 120 – Kile vs. Orsi, 126 – Hunsley vs. Stoltenberg, and 170 – Pape vs. Higgins, as they all have the potential to be great matches and could turn the tide one way or the other. Omaha Skutt showed what they were capable of last weekend, and the wave that they are riding should be enough for them to take home the State Dual championship.