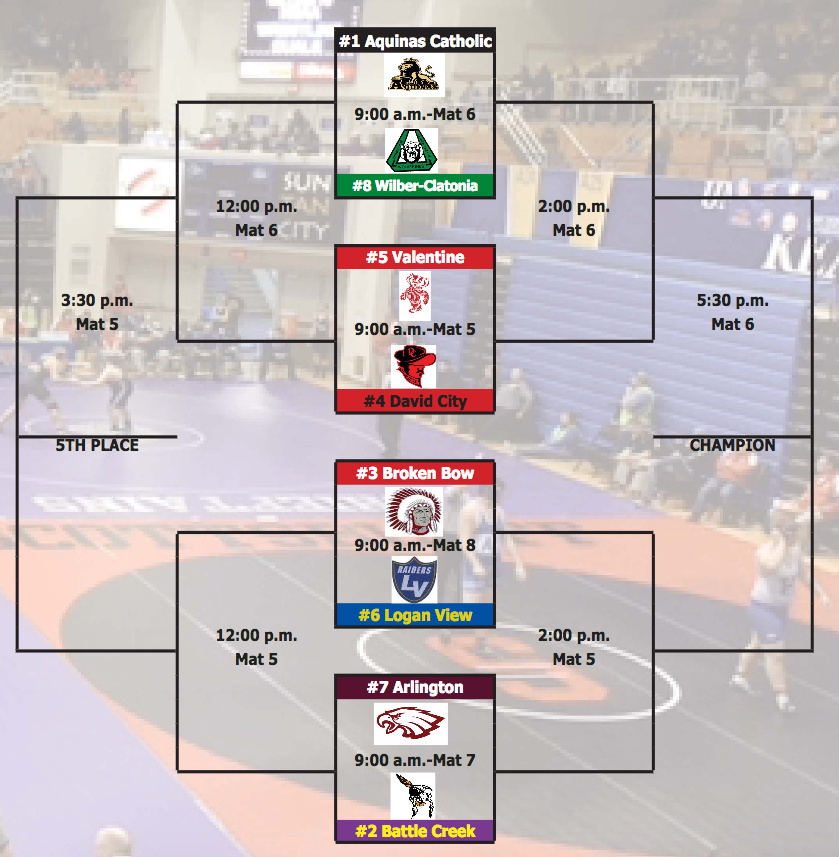 These two both came out of the C2 district, so they did get to see each other in action. Aquinas won the district with 222 points compared to 155.5 for Wilber-Clatonia, so that gap in scoring seems to bode well for Aquinas heading into the dual. Aquinas qualified 11 and Wilber-Clatonia brought 8 to Omaha so expect plenty of quality matchups throughout this first round matchup. Both teams were battling some injuries at the state tournament so hopefully they have their normal lineups. Although there should be some good matchups expect Aquinas to pull away and win this dual comfortably.

Since the districts help determine the seeding at the state tournament occasionally you may see a blockbuster first round matchup such as this. State champion team Valentine and runner-up David City are set to do battle in the FIRST ROUND. This dual on paper should be extremely close. David City has beaten the top seed Aquinas in dual action already so they’re up for the task.

Valentine has done some weight shifting in duals so that will be something to keep an eye on as it looks like that may be a necessity to win the dual. If both teams use their district lineups, then it appears Valentine would be favored at only six weights. Even then it looks like David City would only be favored by three points or so in the dual. If Valentine does do some weight changes, it looks like they could potentially gain three points back and make the dual a dead heat if everything went right. It’s hard to bet against Valentine, but the way the lineups match up it really does look like David City has the edge. Bonus points will be crucial in a dual this close. For Valentine if Stephen weighs in at 182 and wrestles 195 for this dual and they insert McGinley at 152 then the matchup at 160 between Benson and Allen becomes huge.

Broken Bow has probably had an eye on the state duals all season. They are top to bottom as tough as it gets for a class C team in terms of depth. They only have one losing record in their whole lineup, and that is just slightly below .500. Both teams qualified every weight from 106-132, so expect some competitive matchups in the lighter weights. From that point on however, Broken Bow will be favored in most of the matchups. Logan View will look to pull off an upset and build on that momentum to make the dual interesting.

Returning state dual runner-up Battle Creek will face a tough test out of the gate against Arlington. It’s a realistic possibility that each team wins seven matches apiece. However, in most of the matches Battle Creek is favored in they appear likely to score bonus points. If Battle Creek doesn’t bring a full healthy lineup then this one could get interesting quickly. In order for Arlington to stay in this dual they’ll probably need to take two of the three marquee matches.

If David City gets by Valentine, then it would likely set up a semifinal match against in town rival Aquinas. It’s just incredible that two teams from such a small town can both be so great at wrestling. It really is a testament to the tradition of Butler County and David City wrestling.

The two teams met earlier this year with David City controlling the dual and winning 49-26. There are a few minor differences in each lineup, but it doesn’t appear to have a major impact on the dual. Aquinas will likely have Shonka back in the lineup at 120 where he’ll probably be slight underdog to Harris. Also look to 285 where Ingwersen beat Schramm 11-5 earlier this year. With the volatility that always comes with the bigger guys that could be a key match. Aquinas probably did give up bonus points in a few matches that will probably be closer in this dual as well so look for the score to be closer than the first go around.

There are going to be a ton of highly competitive matchups in this dual featuring the third and fourth place teams from Omaha. Broken Bow appears to have the edge based on their prior meetings at the Ord Invite and the state tournament. There will be four battles between wrestlers that finished in the top four at the state tournament. If Battle Creek can reverse a few of their prior losses, then this dual could come down to the wire.

Broken Bow and David City both competed at the Valentine Invite in December and matched up a few times at the state tournament. The dual itself promises to be great, with several quality matchups in store. It wouldn’t be surprising if we made it through the whole dual without seeing a fall. Each team reversed early season results at state with Seth Styskal avenging a loss to Faulkenberry in the state semifinals and Powers reversing a loss to Noah Styskal at state (twice). It looks like Broken Bow has the edge in the upper weights with the potential to take almost all of the matches from 152 and up. David City likely has 152, 195 and 220 circled and if they can perhaps get two out of those three weights then they should be right in this dual.