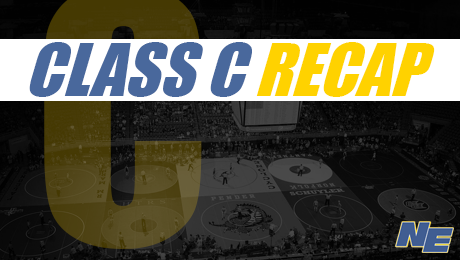 Valentine defeated B#5 Sidney in a dual on Friday and then also won the Ainsworth Invite by a narrow margin over them on Saturday. #7 Central City also participated in the Ainsworth Invite and finished 4th. Broken Bow won the Ord Invite over #9 Ord by 54 points. #3 Battle Creek finished third, 17.5 points behind Ord. #6 Aquinas edged out #4 David City to capture the Boone Central title. Crofton/Bloomfield welcomed Jaden Janssen back into the lineup and finished 2nd in Plainview.

106:
Chris Williams continues his rise with a win over #1 Kunz. The match was tied in the third period and Williams was able to get five points to win it. In the other ranked battle over the weekend Zoucha won over Zitek. For comparison’s sake Williams beat Zitek by fall a few weeks ago. #3 Benavides won the Mitchell Invite. #4 Hunter Gilmore went 5-0 at the DC West duals. Mueller from Logan View won the EHC title and is just outside of the rankings at this point. Zeckser from Doniphan didn’t compete again.

113:
Faulkenberry now has beaten returning state champ McCracken and state finalist Styskal at this weight and will be the new number one going into the postseason. #3 Styskal beat #6 Scott by major decision on Saturday. #4 Rowse has a pretty good hold on the 4th spot and finished third at Ord behind Faulkenberry and McCracken. Paczosa from St. Paul didn’t compete over the weekend.

120:
Top ranked Krolikowski pinned his was through the Ainsworth Invite. #2 Lade beat #4 Gaffney 9-5 at the Ord Invite. #4 Carlson cruised through the Warcat Invite and #5 Schram did the same at the East Husker Conference tournament. The top five at this weight have earned their spots, but the battle for #6 should be a good one. Wakefield’s Cesar Sandoval has come on strong lately and took B#5 Russman to the wire and has also wrestled Lade to a 3-point match.

126:
Kersten beat #3 Powers in the finals of the Ord Invite to reaffirm his top ranking in class C. There were a few upsets at this weight over the weekend with Child of Gordon/Rushville knocking off Brandenburg at the Ainsworth Invite and Carranza beating #6 Brown in a wild one at the Doniphan Invite. #2 Styskal didn’t compete at the Boone Central Invite after sustaining an injury last week. #5 Riley Wehrer didn’t place at the Adams Central Invite, but his wins over Sutton’s Joseph Hinrichs certainly still justify his ranking. Hinrichs has a win over Carranza this season as does Smydra from Norfolk Catholic. The top three at this weight have separated a bit from the pack (if Styskal is healthy), but there are several others in medal contention.

132:
Kelber knocked off B#1 Arellano in their Thursday dual and was winning in the finals of the Ainsworth Invite, before being pinned by the #2 wrestler in SD. Yawn stays undefeated on the year controlling both #6 Valentine and D#2 McKibbin. #3 Miller went 5-0 at the DC West duals and #5 Chase Smith rolled to a tournament title in Doniphan. The top six at this weight have earned their ranking at this point in the year. Ord’s Miguel Alvarado competed well at the Ord Invite where he lost 3-0 to D#1 Ostrom in the semifinals of the Ord Invite and finished 3rd.

138:
Waddington was slowed down in the finals of the Central Valley Invite by Schlleis. Scheis has been impressive since moving to 138 and has a win over Conestoga’s Hogue who has been ranked this season. Hughes pinned his way to a Raymond Central title and White did the same at Boone Central. Ramon split matches with B#4 Raines, winning the dual matchup 8-6, but losing by fall in the Ainsworth finals. The top four at this weight appear to be pretty clear this point in the year. #5 Rogers finished second at the Irish Invite to D#1 Riggs. #6 Wardman finished third at the East Husker tournament, dropping a match by fall to D#3 McNeil. Outside of the rankings, Brass from Broken Bow has an early season win over Rogers. Kluthe from Ord is back down at 138 and avenged an early season loss over Brass. Colton Nuttleman has been impressive lately as well, winning the Doniphan-Trumbull Invite over the weekend.

145:
Hernandez survived another tough test this week, outlasting D#3 McFarland in the Boone Central finals. Heimes finished second at the Ord Invite, beating #4 Ulmer in the semifinals before dropping a close match to D#4 Coons (who upset D#1 Riggs before that). Olson split matches with Higer from Sidney on Friday and Saturday and finished fourth in Ainsworth out of a tough bracket. #5 Weiss won the Mitchell invite and #6 Mackley defaulted out of the Adams Central tournament. Hernandez and Heimes have earned the top two rankings at this weight, but after that there’s a ton of wrestlers that could medal at this weight. In addition to the C4 district guys ranked 3-6 there’s a number of wrestlers on the eastern part of the state that should factor in. Verzani of Wakefield just beat Albrecht at the Raymond Central tournament. Gallion from Central City was within one-point of Olson in the consolations of Ainsworth. Anyone who qualifies out of their respective district is a medal threat. Montenegro from Madison is now down at 145 after starting the season at 160 and won the East Husker Conference on Saturday.

152:
This weight just keeps getting tougher as the season progresses. Bates had an impressive win over B#2 Quandt on Friday. Myers won the Ord Invite over #6 Heller. #3 Tracy dominated the field to win the Doniphan Invite. #4 Warner won all of his matches at the DC West duals and #5 Stone pinned his way through the Warcat Invite. The biggest news lately at this weight is Janssen and Haskell dropping down from 160 lbs. Janssen will definitely be in the state title discussion at this weight. Miller from Logan View has beaten Haskell back to back weekends now by close margins. Haskell beat Strauss from North Bend in OT in the semifinals of the EHC tournament. Zoucha from Malcolm won the rubber match against district opponent Vodicka.

160:
Borer continues to cruise this season with another bonus point win over D#1 Kulhanek. #2 Long won a close one over #4 Schneiderheinz in the semifinals of Ainsworth. He then lost 6-4 to B#1 @152 Robb, giving him his closest match of the season in the process. Petree impressed this weekend as well, with a convincing win over B#1 Shaw. #6 Becker from Southern Valley pinned all of his opponents at the Medicine Valley Invite. The #6 ranking at this weight has opened up with the departure of Janssen to 152. Jones from Louisville had an impressive win over Wilkins of Arlington. Looking forward to a possible Borer/Petree matchup at GICC on Saturday.

170:
#1 Stephen won the Ainsworth Invite on Saturday. In their fifth meeting of the season, #4 Hull from Logan View bested #2 Hines in OT. In the semifinals of the same tournament, Hull knocked off #5 Hansen 4-0. #3 Moles lost a 1-point match in the finals of Plainview to D#2 Atkeson. #6 Coufal won a tough weight at the Boone Central Invite. Just outside of the rankings is Pomajzl from Wilber-Clatonia, who won the Adams Central Invite.

182:
Reimers went the distance for just the third time this season against #4 Deinert in the Boone Central finals. Deinert also won over A# Johnston in the semifinals. #2 Poppe pinned his way through the Plainview Invite, while #3 Mueller did the same at East Husker Conference. #5 Fairbanks won his home invite. #6 Lech of Ord was edged out 6-5 by D#4 Dawe from Burwell. In Thursday action Deinert bested Fairbanks 5-3. Feldner from Kearney Catholic has beaten Fairbanks and split with Lech of Ord and should be considered for the next set of rankings. Also out of the C4 district Coalson of Bridgeport won the Mitchell Invite and McGinley from Valentine lost 7-4 to a rated South Dakota wrestler in the Ainsworth finals.

195:
#1 Gabriel beat D#1 Racicky for the second time this season. #2 Vasquez rolled to a Mitchell Invite title. McGahan dropped a one-point match to B#3 Gugelman in the semifinals at Adams Central and won 1-0 over Kocian in the third-place match. #4 Kee topped D#3 Smith at Doniphan. 5th ranked Ryder Fuchs avenged his only loss of the season with a win over D#2 Rahn. #6 Schluckebier has just one loss on the season so far after winning the Bishop Neumann Invite. He has a win over Ray who sits just outside the rankings. Ray has beaten Gappa head to head. Gappa has split with Kee. Kocian should also be right there in the running for a medal with close losses against McGahan and Kee. Lots to be discovered at this weight on Saturday at GICC with Gabriel, Ray, Schluckebier and class B#6 Allen all slated to compete at 195.

220:
Top ranked Hinojosa stayed undefeated after winning the Medicine Valley Invite. #2 Treyvon Brooks was in a tight match with Simmons of Centura before getting the fall. #3 Eilers pinned Ray in a Thursday dual. Ray wrestled at 195 over the weekend. #5 Carlson won the Ainsworth empty up at 285. #6 Bauers finished second behind B#5 Kiser.

285:
Not many marquee matchups for the 285’s over the weekend. Lefferdink won the Raymond Central Invite. Welsh won his home tournament. Jerabek came up just short against D#1 Hughes again, losing 3-1 in the finals of the Ord Invite. #4 Rempe didn’t compete at Adams Central. Moses pinned all of his opponents at the Doniphan Invite. Zagurski had two forfeit wins in dual action on Thursday, and Winnebago was idle over the weekend. Rankings contender Shumaker had five forefeits at the DC West duals.