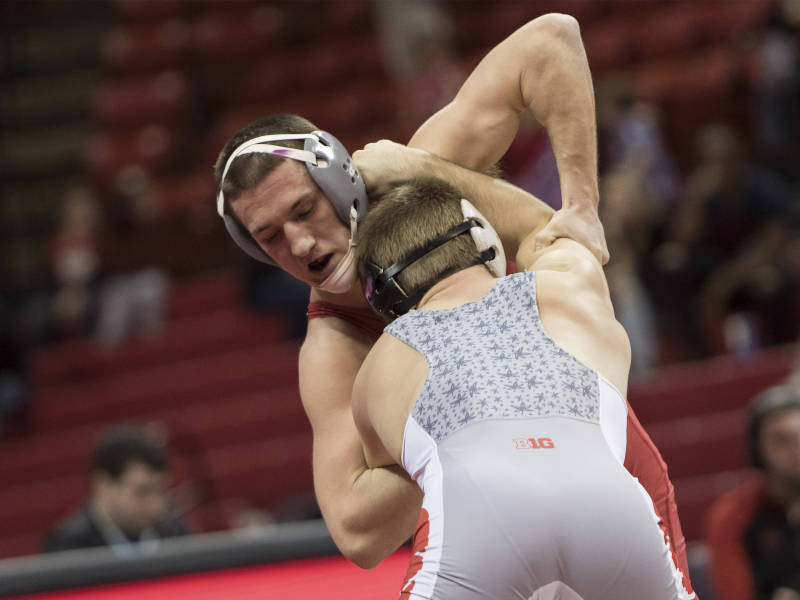 125
The Wildcats will start off with the advantage at 125 with a red-hot Sebastian Rivera (17-1) taking on redshirt-senior Mitch Maginnis. Maginnis will need to slow the pace and finish his shots if he wants to hang with Rivera. Many believe that Rivera should be placed among the highest contenders to be the NCAA Champion in 2018.

133
Jason Renteria (1-0) will likely face his toughest opponent of the year with Colin Valdiviez. Both wrestlers are coming into the match unranked. Valdiviez has a 13-7 record, with most of his losses coming to ranked opponents. Renteria made his debut just two weeks ago against Maryland. Brian Peska (6-7) is also listed as a potential starter. Peska has been a regular in the lineup for the Huskers this season.

141
#13 Chad Red (12-6) is the favorite in this match. Red has had a bit of a rollercoaster season, having beaten Tommy Thorn of Minnesota, but also dropping a couple of matches to unranked opponents. His opponent, Alec McKenna is a .500 wrestler with a 10-10 record this year.

149
#12 Colton McCrystal vs. Ryan Deakin is the marquee matchup of the night. #12 McCrystal is 12-2 on the season and has been a consistent hammer for the Huskers. #9 Deakin is coming into the match with a 21-3 record. This will be a big match for B10 tournament seeding.

157
#8 Tyler Berger has also had some ups and downs this season, dropping a few matches to unranked opponents. However, it appears that Berger has worked some kinks out and is back in prime form. He will be a heavy favorite to beat Shayne Oster who is just 9-10 on the season. The Huskers will expect bonus points in this match.

165
#10 Isaiah White has been extremely consistent this year with a 15-2 record. He will also be expected to pick up bonus points against (9-10) Michael Sepke.

174
Beau Breske is having a great year for a redshirt freshman in the B10 with a record of 9-4. He will be up against a tough #18 Johnny Sebastian, who has a 17-7 record this year. This is a good matchup for Breske, and expect him to be there to win the match in the third period.

184
#7 Taylor Venz (15-3) is the favorite in his matchup with Mitch Sliga. Sliga is a redshirt senior with a 13-7 record this year. Venz only weakness so far this season is giving up big points in the third period. He will need to be consistent throughout the match to beat the seasoned veteran.

197
Eric Schultz (10-5) is another redshirt-freshman having a great season. He will face off against Zack Chakonis (9-9). Schultz has been a consistent big guy for the Huskers and should come away with a win.

285
Sophomore David Jensen (7-8) will have his hands full against #18 Conan Jennings (14-7). Jensen is a mobile heavyweight with good low level shots. Jensen’s key to victory will be to avoid getting caught underneath Jennings and finishing his shots from his feet. Patrick Grayson (18-8) is also listed as a potential starter for tonight. He has not started for the Huskers yet this year, but has had a successful open season.