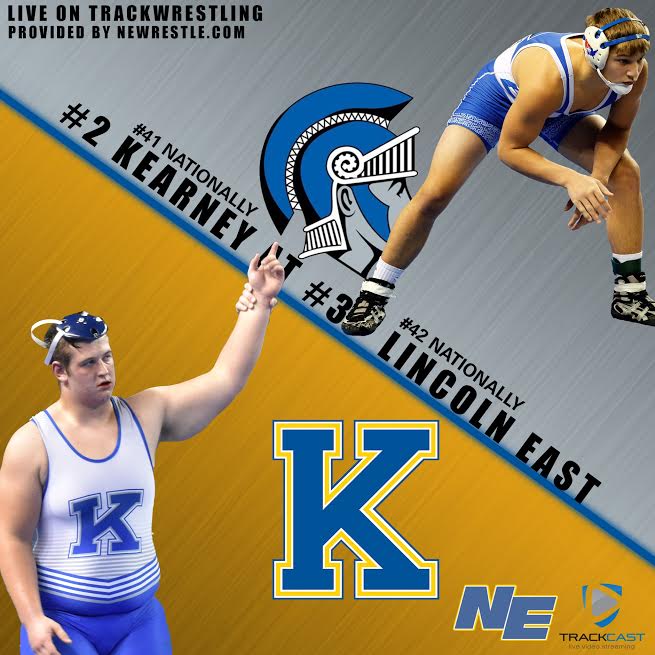 Two of the best teams in Nebraska who are both nationally ranked will be wrestling on the stage of the Lincoln East Auditorium tonight. This is a rematch from the semifinals of the Flatwater Fracas where Kearney beat Lincoln East 34-27 by winning 8 matches. Before that, Lincoln East topped Kearney and the rest of the field at the Council Bluffs Classic that included 3 nationally ranked teams. During opening week, Kearney topped Lincoln East at their home tournament. Getting bonus point wins, and not giving up bonus point wins will be paramount in this dual. This will be the 4th time both teams have seen each other this year, so expect to see some surprising results.

Wrestling on the Stage:

“This is a fun opportunity to compete on the stage against the best team in the state. Overall, this dual is good for the sport and good for our school. The auditorium should be packed because of the limited seating, which should provide a more intimate feel. At the end of the day we want our guys try to treat it like another match.”
-Keenan McCurdy, Lincoln East Co-Head Coach

106- #4 Dalen Richie (KEA) vs #6 Nic Swift (LE)
These two have traded close matches this season, with Swift winning at the Kearney Invite, and Richie winning at the Fracas. Consider this a swing match.

113- #3 Gage Ferguson (KEA) vs Corbin Harrington (LE)
Ferguson won 5-0 over Harrington at the Fracas. Ferguson is a freshman while Harrington is a senior and 3x State Qualifier.

120- Brayden Smith (KEA) vs #1 Maxx Mayfield (LE)
Fargo All-American Mayfield won 11-3 over Smith at the Fracas. Smith is a little undersized here, but has good attacks from the open and is explosive when he needs to be.

132- #5 Gauge McBride (KEA) vs Breckin Sperling (LE)
McBride won 13-5 over Sperling at the Fracas. Expect Sperling to close the gap, as he’s looking to get over the hump by beating a ranked opponent.

138- #1 Nick James (KEA) vs #4 Adam Kinnaman (LE)
James won 19-7 over Kinnaman at the Fracas. Kinnaman should be able to keep this match closer with the home support. Both wrestlers are very dangerous, so anything could happen.

145- #4 Teontae Wilson (KEA) vs #1 Chance Fry (LE)
At the Fracas, Wilson and Fry traded first period takedowns before Fry threw wilson to his back and pinned him at the 1:00 mark.

152- #5 Jud Kuchera (KEA) vs #1 DaShawn Dixon (LE)
Dixon pinned Kuchera in 1:09 at the Fracas. If Kuchera can avoid a pin or technical fall, it would really help Kearney.

170- Jerimiah Hagemann (KEA) vs Grant Lyman (LE)
Lyman won 6-2 over Hagemann at the Fracas. Both wrestlers are solid with great positioning. A bonus point win by either wrestler would provide a huge bump for their respective teams.

182- Isaiah Stahlbird or #6 Steven Berumen (KEA) vs #2 Andrew Muthersbaugh (LE)
Muthersbaugh beat Stahlbird 3-1 in sudden victory at the Fracas, and beat Berumen 6-3 at the Council Bluffs Classic. With previous matches being relatively close, this could be a minor swing match.

195- #2 Sean Jackson (KEA) vs #6 Elliot Alexander (LE)
Jackson won by injury default at the Fracas, which gave Kearney 6 team points. By looking at their spots in the rankings and assuming no injury default this time around, this is a swing match.

220- Dominick Tavis (KEA) vs Peyton Aipperspach (LE)
This will be Aipperspach’s season debut, as he’s been out with an injury. Tavis won 7-1 over Karmazin of East at the Fracas, so this could easily be a swing match.

285- #1 Lee Herrington (KEA) vs #6 Drake Reinke (LE)
Herrington pinned Reinke in 0:41 at the Fracas, and in 1:24 at the Kearney High Invite. Avoiding bonus points here would be huge for Lincoln East.