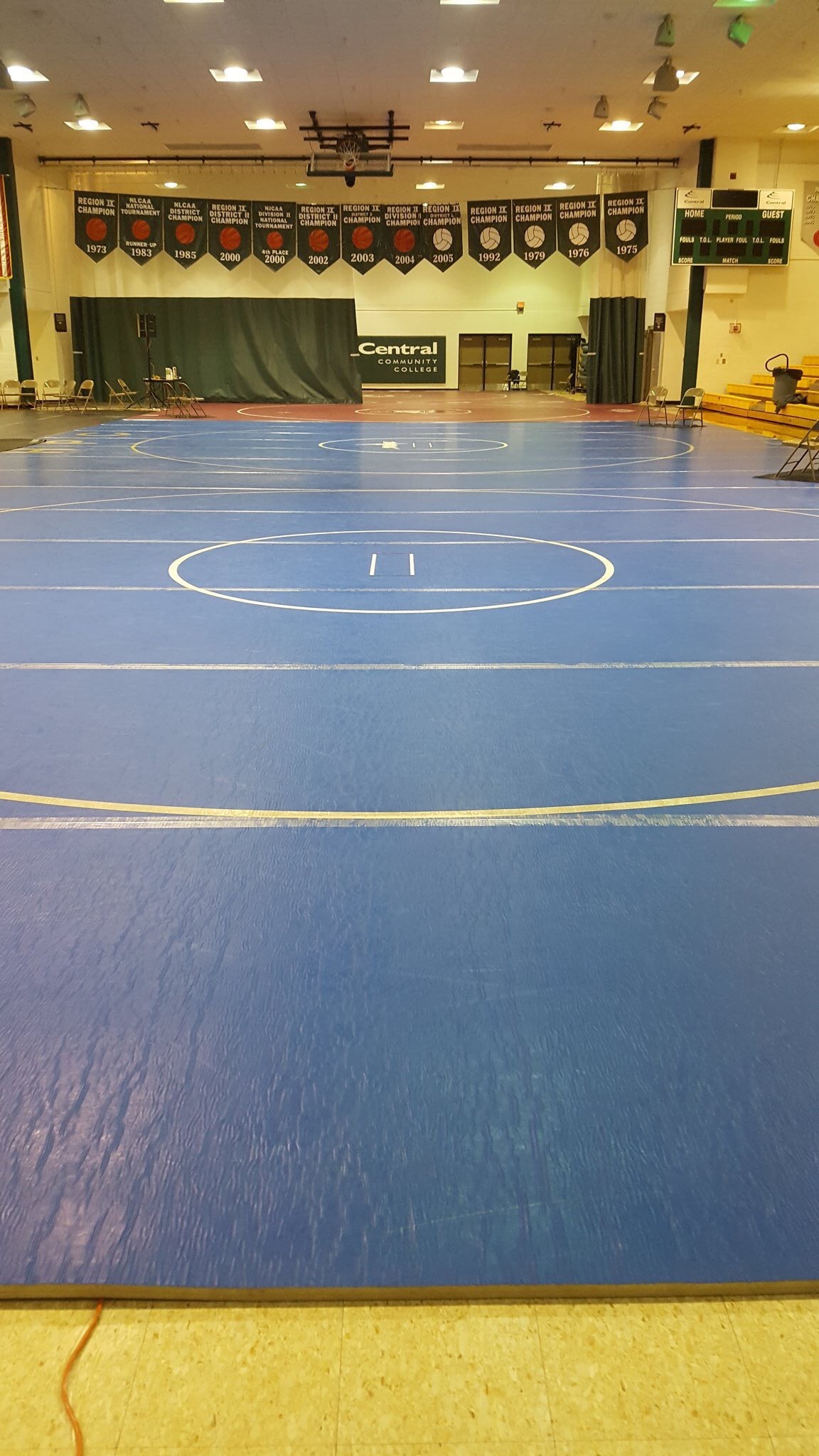 The 49th annual High Plains Invite held in Columbus is always one of the most intriguing tournaments in the state. All four classifications are represented. From a team perspective it looks like it could be a tight race between a handful of teams. Class B teams Schuyler and #10 Wahoo should be in the mix for a team title. Schuyler finished over Wahoo earlier this year at the Boys Town Invite, but it looks like Wahoo has moved some wrestlers into different weights and may be poised to reverse that result. There are three Class C teams participating that are ranked in the top five; #2 David City, #4 Battle Creek and #5 North Bend. Battle Creek appears to be getting closer to full strength. David City is still without the services of Melvin Hernandez. North Bend is extremely tough basically from 138 through 195. D#5 Palmer and #10 Oakland-Craig both have solid lineups as well. Creighton Prep is the lone class A team this season and has a solid core of upper weight wrestlers as does class C Centennial. Several other teams bring quality individuals and could flirt with a top five finish. The brackets are up on trackwrestling, but the tournament starts tomorrow so things may change in some weights before the tournament begins.

State champ Logan Russell headlines a tough group at 106. Russell does have common opponent over 3rd seed Obermiller with his win over Kunz from Central City. Centennial’s Wyatt Schoepf is seeded second likely based on record and he has a head to head win over Trenton Arlt who’s seeded fifth. Dalton Hansen of Harvard is also having a strong season and enters as the fourth seed. Garrett Jensen from Palmer comes in as the 6th seed. Keep an eye on Kearney Catholic’s Hilliard who is down from 113.

Marquee class C match may materialize here with #1 McCracken and #3 Styskal. Styskal has one OT loss this season to C#2 Faulkenberry, so if the match happens the top three in C should be solidified for the time being. Several others vying for a third-place finish. Wetzel of Palmer has a head to head win over Payne from Centennial. Witt has just made it down to 113 for the second half of the season.

C#2 Lade is set to wrestle at 120 for the first time this season. Palmer’s Ruger Reimers has only two losses to the top two wrestlers in class D. Schram of Tekamah-Herman has one loss to class A standout Knopick and will likely square off against Reimers in the semis. Barlean from David City has been ranked at one point this year and will be a tough test as will Feldner from Kearney Catholic, who has been having success since moving down from 126. Other wrestlers in the mix here include Martinez of Schuyler, Pille from Oakland-Craig and Schernikau from Centennial.

Another top-notch class C battle potentially in store here between Styskal and Kersten with the top ranking in class C on the line. Returning qualifiers Bridgmon of Syracuse, Castro from Schuyler and Shiers of Kearney Catholic are also in the field. Overall this isn’t the deepest weight and could provide opportunities in the team race if some of the top teams can get medals here.

Swenson of Oakland-Craig has been on a tear this season. He’s undefeated thusfar, winning every match by pin or tech-fall. Jacson Valentine of David City has had a solid season and slots into the 2nd seed. Keep an eye on Shanahan of Wahoo started the year on JV at 138, but has made 132 and already owns a quality win over Vergara of Wayne. Beers of Syracuse, Ahlman of Battle Creek, Sharman from High Plains and Hinze of Scotus also all have winning records entering the tournament. Fairly open weight class that could have an impact on the team race.

Four ranked wrestlers and tons of depth make 138 one of the toughest weights at the tournament. White has the top seed over Hughes based on his undefeated record. The potential finals match between the two will be one of the top matches of the tournament. White owns a head to head major decision win over McNeil. Hughes has a head to head win over Wardman, handing him his only loss of the season so far. Returning qualifier Rogers from Kearney Catholic sits just outside the top-6 in class C and will likely get a crack at Wardman if they are the four and five seeds. Hawkins from Tekamah-Herman is having a breakout season. Him and Wardman squared off earlier in the year and Wardman won by injury default. McNeil has a 1-point win over Walling of Wahoo as does Roman of Schuyler. Guzman from Palmer and Neville from Scotus could play early round spoilers from the 9th and 10th seeds. Should be plenty of early-round battles at this weight.

C#2 Heimes and B#5 Barry are both stingy wrestlers, tough to score on and know how to win the close matches. If they were to meet in the finals expect a low scoring bout. Ray from North Bend and Avery of Centennial have both been ranked earlier in the season and are state medal caliber wrestlers. Ray has common opponent over Avery with his win over Albrecht from Raymond Central, but that must not have factored into seeding order as Avery is the third seed. Several other wrestlers around .500 that have a chance at medaling at this weight.

D#1 Connor Donscheski is undefeated on the season and the favorite at 152. Mullally from North Bend has a head to head win over D#5 Soule. Returning class C medalist Blake Heller is seeded 2nd. Wahoo’s Josh Nuckolls and Caden Yrkoski of Schuyler are both having good seasons so far and should be right in the mix at this weight. Nuckolls has a head to head win over Yrkoski 7-4. David City’s Dylan Vodicka has wins at 145 over ranked wrestlers in Nebraska and South Dakota and should be dangerous from the sixth seed. He’s presumably making way for Hernandez to return to the lineup at 145 in the near future. Might be the deepest weight of the tournament here with Montenegro from Madison down from 160 and Ackles from Adams Central. Probably the deepest weight of the tournament with 14 seeded wrestlers.

C#1 Borer appears to have hit his stride this year. He is undefeated on the season and recently won by major of second seed Kulhanek. Palmer’s 4th ranked Wichmann would surely like a shot at the top ranked Kulhanek. Haskell from Madison had a rough outing at the Valentine Invite and will look to get back on track. Pray from Creighton Prep is having a solid season this year. Cornwell is a medal contender in class B and should not be overlooked here as he could potentially make the finals. Once again, several other medal caliber wrestlers here with ten seeded wrestlers. Spencer Allen of David City has a losing record, but does own a head to head win over Haskell.

Hines is undefeated on the season and will face a stiff test with two class B ranked wrestlers in Hancock and Hernandez in the field. Hancock has a 1-point win over Hernandez, but it appears head to head matches didn’t play into the seeding has Hernandez has the 2nd seed and Hancock is 6th. Hansen from Tekamah-Herman owns a win over Horejsi, and they may see each other again from the fourth and fifth seeds. Schafer of Boone Central, Samuelson from Palmer and Nantkes from Centennial are all having solid seasons as well. Tons of depth at this weight.

C#3 Mueller is the only ranked wrestler at 182. Aside from Mueller Schuyler’s Caleb Novak is the only other returning state qualifier in the field at his weight. Bordovsky of Wahoo has a head to head win over Novak at the Boys Town Invite. However, this didn’t get much weight in the seeds since Bordovsky is the 5th seed. Timothy Markvicka has split time between 170 and 182 and is seeded 3rd at 182 for his home tournament. AJ Hawthorne from Battle Creek is back in the lineup after being out in their most recent tournaments. Feldner of Kearney Catholic and Snyder from Syracuse are seeded 6th and 7th respectively.

B#1 Kolterman comes in as the heavy favorite at 195. Ray from North Bend is back down to 195 after splitting time at 220 earlier this year. Marx of Battle Creek is a medal threat in class C and Gappa from Kearney Catholic qualified two years ago and has a nice win by fall over Remington Gay of Arlington in a previous tournament. Caleb Cast is down at 195 for the first time after compiling an 18-2 record at 220. The 6th seeded Allen from Scotus owns a win over C#2 Kee from Gibbon. Tough freshman Pray from Creighton Prep should battle for a medal here as well.

Four wrestlers ranked in the top four make this a very tough weight. Rollag made the heartbreak round in Omaha last year at 285 and has had a phenomenal season at 220 this year. His only in-state loss is by 1-point to A#2 Fee of Gretna. Wahoo’s Sutton is a state title contender at 220B. His lone loss on the year is a 1-point setback to B#2 Titus from Holdrege. Sutton defeated Schuyler’s Maganda 7-6 in an earlier season meeting, handing him his only loss. Maganda has a 6-3 win over Eilers from David City. Jon Merten from Boone Central is also having a solid season this year. Bauers from Centennial is in the lineup at 220 now that Cast has moved down.

Three wrestlers from different classes ranked in the top two should make for a fun weight. Lefferdink should be the top seed based on his undefeated record and last year’s state title. Hasz has just one in-state loss this year to A#1 Herrington of Kearney. In the semis, Hasz will likely square off with the undefeated Wioskowski from Adams Central who has only went the distance once this year. Hale from Oakland Craig has a head to head win over Bender of Centennial, but is seeded below him. Swahn of Wahoo began the season as JV 195, but has yet to lose a varsity match at 220 and 285 in dual action. He is relatively unproven so a potential quarter match after pool play with Bender would be a good barometer for him.