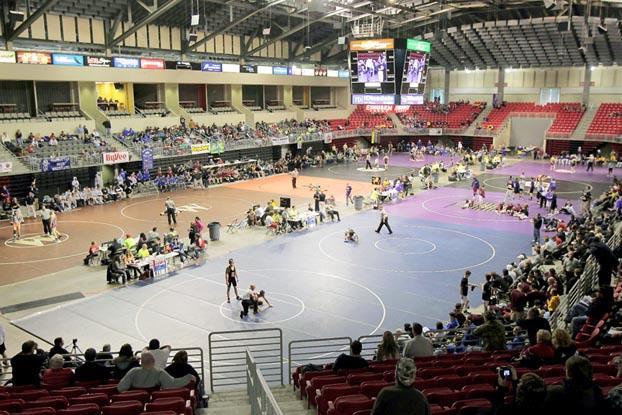 The 11th annual Flatwater Fracas once again proved to be one of the premier wrestling tournaments in Nebraska. This year the Fracas featured 28 teams from Nebraska, Colorado, Kansas, and Wyoming. Of the teams involved, 17 of them are ranked in their respective states. Along with the team rankings, the Fracas showcased 118 individual ranked wrestlers with 18 of them being ranked #1.

Eight class B teams this year tested their squads against the Fracas field. The dual tournament gave each team a total of eight duals over the two day competition. The depth from top to bottom of the top class A teams (Gretna, Kearney, Lincoln) along with Manhattan, KS (6A #5) proved to be too much for the class B teams to overcome. However, these teams represented themselves very well. Several wrestlers posted significant wins against quality opponents.

The Badgers took care of Adams Central, Grand Island JV, Omaha North, and Mead, CO, with their setbacks coming against Hastings (#5) and Lincoln East (A #3) during pool competition. In their bracket, Bennington fell to Northwest (#4) and Lincoln Southwest. Overall the Badgers finished with a 4-4 record. Bennington was led by Devin DeLancey (145 – #4) who posted a 7-1 record.

The #6 ranked Bears took a strong performance on the second day to finish 13th. They posted wins during their pool against Papillion LaVista South, Lincoln Southeast, Northwest (#4), and Beatrice (#9). Their losses came against two ranked teams – Kearney (A #2) and Cheyenne East (4A #3). The Bears dominated their bracket with strong wins over Adams Central and Grand Island (A #7). Jackson Nielsen (113 – #2), showed his dominance posting an 8-0 record, of which four wins were against ranked opponents. Walker Moore (126 – #1) went 7-1 with his lone loss coming at the hands of star Phillip Moomey (A #1). Dalton Lewis (170 – #3) also finished with a 7-1 record for the Bears.

The Minutemen brought their #3 ranking into the Fracas and finished 15th. Lexington had some injuries heading into the tournament, which affected the team’s results. They finished the pool duals with a 3-3 record posting wins over West Point Beemer, North Platte, and Smith Center, KS (3A #5). In their bracket, they fell to Grand Island (A #7) and defeated Adams Central. On the weekend, the Minutemen were led by Brady Fago (126 – #3) who finished with a 7-1 record. His lone set-back was to North Platte’s Jayson Scott (A #6).

Finishing 3-3 in their pool, the Patriots found the going tougher in bracket competition falling to Blair (#6) and Lexington (#3). Adams Central’s pool wins were against Omaha North, Grand Island JV, and Mead, CO. Setting the pace for the Patriots was Zach Wioskowski (285 – #2), who finished 8-0 over the two days.

The Orangemen entered Friday’s action as the #9 rated team in class B. Beatrice struggled to put together a complete dual from top to bottom and fell to all of their opponents during pool competition, including four ranked team. However, they did rebound nicely and finished their bracket duals with two wins, including a win over Battle Creek (C #3). The bright spot for the Orangemen was Jerad Humble (220 – #6) who finished the weekend with a 7-1 record.

The Cadets were led by Ray Loftis (135 – #6), who posted a 7-1 finish over the two days of competition. West Point had their share of struggles on the weekend and were unable to capture a team dual win. Along the way, the Cadets did face five ranked teams.