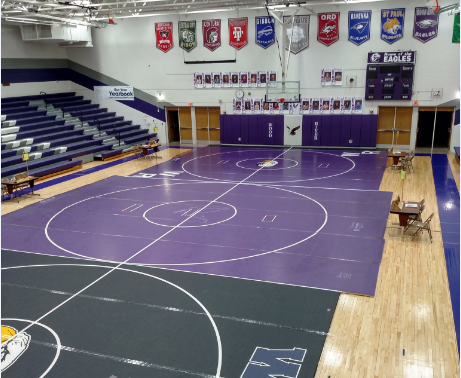 The big Friday tournament this week is the Wood River Invite. This tournament features three teams in the top ten (#7 Aquinas, #8 Gibbon, #9 Sutton) and eleven total teams from class C in addition to D#3 Amherst and a few other class D schools. Ord (2nd @ Broken Bow), Wood River (3rd @ Ravenna) and Doniphan-Trumbull (3rd @ Harvard) all fared well in the first week of competition and will make this a very deep tournament. With a total of 22 ranked C/D wrestlers competing there will be plenty of great matchups in store.

106: #3 Landon Zeckser didn’t wrestle at Harvard last week, but will be the top seed if he competes. Carson Thompson from Wood River knocked off Jesse Sauceda from Shelton 10-3 in the finals of the Ravenna Invite. Sauceda won Harvard the next day. Freshman Zach Zitek of Aquinas will play a big factor at this weight after finishing 2nd at Bennington last week.

113: #6 Colton Rowse knocked off #4 Jacob Paczosa last weekend so he’s a good bet to be the top seed at this weight. Another Aquinas freshman, Noah Scott, will be a tough opponent for either Rowse or Paczosa, depending on which side of the bracket he falls. Sam Tourney from Shelton won the Harvard Invite last week pinning all of his opponents.

120: Top ranked Lee Carlson is the favorite at this weight. He’ll have a stiff test as there are several quality wrestlers here. Talon Petska of Ord has split matches with #3 Spencer Gaffney and will be looking for another statement win. D#3 Isaiah Shields from Amherst and returning qualifier Ryan Bond of Wood River should be competing at this weight as well. Unsure if Usama Erickson of Superior who qualified last year will be wrestling or not, but he would be a medal threat here also. Keep an eye on if Gibbon has a representative at this weight. Tyric Beattie has been off to a strong start at 126 lbs, and returning qualifier Daniel Escandon may be here as well. Doniphan-Trumbull’s representative at this weight will also be competitive whether it’s Lucas Williams or Sam Hoppe.

126: Freshman Joseph Hinrichs from Sutton made a splash in week 1, winning the Harvard Invite. If he’s at 126 then my guess is he’s right on par with Anton Carlson who is a 2x state medalist. Beattie of Gibbon (or Escandon is he’s competing) has a win over returning qualifier Kaden Boyce from Ord. Other qualifiers Hunter Cobb of Amherst and Layne Shiers from Kearney Catholic add depth to this weight.

132: #4 at 126 Anton Carlson opened the year at 132. He dropped a match to Austen Spike from Doniphan-Trumbull at the Harvard Invite. Lane Brown from Gibbon has been wrestling well and Miguel Alvarado from Ord is off to a hot start this year, his only loss coming to Brown.

138: 2nd ranked Evan Waddington highlights a tough field. Returning qualifiers Zach Rogers of Kearney and Chase Smith of Gibbon will probably be the next two seeds here. Cory Carlson from Sutton won the Harvard Invite in week 1. Talented Ord freshman Garret Kluthe has wrestled 138 and 145 so far this year, so he may wind up at 145.

145: C#3 and D#5 Chase Morris and Sam Florell should be a great potential finals match at this weight. They both competed at 138 in class D last year where Morris finished 5th and Florell lost in the blood round. Dustin Stone from Sutton finished second to Morris at Harvard.

152: Probably the marquee weight of the tournament. 152 boasts #4 Jacob Mackley, #6 Chandler Stone, and #5 @ 160 Jacob Tracy. Added depth at this weight from Jarin Potts of Amherst, Clayton Shoemaker from Ord, and Wood River’s Camden Thompson make this the weight to watch at Wood River.

160: State Champion Kyle Petree is the odds on favorite at 160 lbs. James Greiss from Sutton pinned his way through the Harvard Invite last week and Cole Stokebrand of Amherst finished 3rd at Ravenna.

170: Another excellent weight as C#2 Michael Coufal and D#2 Stephen Duffy, along with D#5 at 160 Edwen Baptista all were at 170 in week 1. Christian Eacker from St. Paul finished 2nd at Broken Bow after beating Ord’s Jesse Ulrich in the semis.

182: Another potential battle between top two wrestlers from C and D here with returning state champion and 2nd ranked Joseph Reimers and D#2 Daniel Duffy at this weight. Returning qualifier Jacob Lech of Ord is a likely 3rd seed and Kearney Catholic’s Matthew Feldner should also be in contention for a medal.

195: #1 Ethan Gabriel, #2D Seth Racicky, #3 @ 220 Wyatt Kee will all likely be at 195. Just think about how tough this weight would be if Reimers bumped up? Also at this weight Amherst freshman Drew Bogard who had a week 1 win over Wood River state qualifier Diego Guerrero.

220: 2nd ranked Bryan McGahan is the headliner at this weight. Returning qualifier from St. Paul Hunter Kocian appears to be set 220 this season. Zeke Abeyta from Ansley/Litchfield is off to a 7-1 start this season, finishing 3rd at Ravenna which was won by McGahan. Anthony Buresh from Aquinas was 4th at Bennington last week.

285: Nathan Louder from Hershey had a solid season last year and may be the favorite at this weight. Sutton’s Tyler Ohrman was 2nd at Harvard last week.