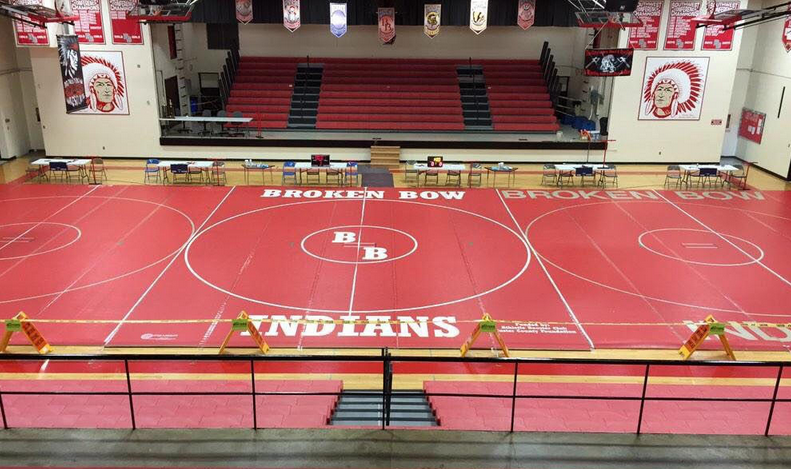 #4 North Bend vs #6D East Butler: North Bend returns all three state medalists and two additional qualifiers from last year’s team that finished 9th in Omaha. Joel Hines who medaled in 2016 will also return to the lineup for the Tigers. They have five ranked wrestlers entering the season including top ranked Zach Borer (160) and Dalton Mueller (170). East Butler returns all six of their qualifiers from last year including medalists Ryley Spatz (#1 at 145) and Brandon Rezac (#1 at 220). In order to see some of the bigger potential matchups some wrestlers may need to be up a weight from where they’re projected as it appears these two teams’ big names are at different weights. Some potential matchups include #5 at 106 Mason Witt for North Bend against East Butler’s Breckin Ratkovec who was one match away from placing at state in class D last year 106. East Butler made the state finals in football this year so they may be short a few wrestlers.

#8 Gibbon vs Ord: Gibbon returns a great core of wrestlers led by state medalist Wyatt Kee. They bring three other returning qualifiers who all won at least one match in Omaha last year. In addition to that Lane Brown who qualified in 2015 and 2016 and Jacob Tracy who qualified in 2016 and missed districts last year due to injury after being ranked the majority of the season. Like Gibbon, Ord returns one medalist and three additional qualifiers to the lineup this season. Ord’s Talon Petska was also injured at the end of last season after qualifying in 2016. One potential marquee matchup that could materialize between Ord’s returning state runner up Ethan Gabriel and Wyatt Kee. #1 ranked Gabriel and Kee (#3 at 220) met several times last year with Gabriel coming out on top in all meetings. Ord has a fantastic freshman in Garret Kluthe who will likely square off against either previously mentioned Lane Brown or returning qualifier Chase Smith of Gibbon (ranked #5 at 132) at 138 lbs. Both teams should boast quality wrestlers at almost every weight so look for several tight matches in this one.

#10 Central City vs #10B Adams Central: 2nd ranked Class C 106 Dyson Kunz had a great run at the Cadet Freestyle Nationals in Fargo over the summer resulting in an All-American finish. The freshman Kunz may square off against Tristen Obermiller who begins the season ranked #2 at 106 in Class B. Central City also returns last year’s 106 lb runner-up Koby Brandenburg (#4 at 120), 6th place at 195 Noah Carlson (ranked #5 at 195) and qualifier Jackson Tejada at 138 lbs.

Lakeview Invite: Featuring two ranked class C teams is the Lakeview Invite with #4 North Bend and #8 Gibbon. Class D #6 East Butler is also represented. The top billed match of the tournament should it materialize would be at 160 lbs between #1 ranked Zach Borer and #5 ranked Jacob Tracy. Jake Frenzen from Columbus Lakeview ranked 6th in class B should also factor in at 160 lbs. Freshman Kaleb Dudek out of Fullerton had a very successful youth career and if he’s at 160 will certain have his hands full in his first tournament. Another potential match at 126 between class D#3 Garrett Sonderup from Fullerton and C#2 at 120 Daniel Escandon of Gibbon is a possibility as well.

Ravenna Invite: Always a nice blend of class C and D at the Ravenna Invite to open the year. D#1 Burwell, D#5 Southwest and D#7 Elm Creek all participate along with seven class C schools. A possible battle between 2nd ranked wrestlers could occur at 220 between Bryan McGahan of Hershey and Anthony Starr of Southwest. #2 at 138 Evan Waddington could be at 145 which may pit him against D#5 Sam Florell of Amherst. At 152 lbs C#4 Jacob Mackley of Hershey and D#5 Colby Coons from Twin Loup could square off. At 285 lbs C#6 Jakob Jerabek from Arcadia-Loup City could potentially face D#1 returning state champion Thomas Hughes out of Burwell.

York Invite: #3 David City and #5 Syracuse make their way to the York Invite this year along with Raymond Central. Unsure if top ranked Max Hughes from Syracuse will be competing at this tournament, but if he does he should have stiff competition at either 138 or 145 lbs. At 138 potentially #3C Justin White from David City and #5C Easton Albrecht from Raymond Central. At 145 lbs we could see the top ranked wrestlers in A, B and C wrestle in Chance Fry from Lincoln Southeast, Scott Fulsos of York and Melvin Hernandez from David City. If Hughes does wrestle and is at 145 this may be one of the best weights at any tournament the whole entire year! At 285 we could see another battle between top ranked wrestlers in Syracuse’s Caleb Lefferdink and York’s Noah Stafursky. Other possible ranked matchups include #2C Seth Styskal from David City vs #6B Thomas Buchanan of Crete, #2C Noah Styskal of David City vs #5C Lane Bridgmon of Syracuse, and #4C Matt Eilers from David City vs #4A Cody Kirby of Lincoln Southeast.

Broken Bow Invite: The Broken Bow invite has TEN class C teams competing on Saturday, by the most of any Saturday tournament. A battle of #1C and #1D could be on tap between Ord’s Ethan Gabriel and Beau Wood of Perkins County.

106 – Young weight class led by Central City’s #2 Dyson Kunz that may only have freshman competing.

113 – Has three ranked wrestlers in St. Paul’s #4 Jacob Pacsoza, #5 Ryan Zoucha of Malcolm and #6 Colton Rowse from Ord. Gabriel Hilliard from Kearney Catholic who notched several quality wins last season at the same weight and Broken Bow has a tough freshman in Casey Faulkenberry slated to compete at this weight.

120 – #3 ranked Spencer Gaffney from Broken Bow could square off against #4 Koby Brandenburg of Central City. Talon Petska from Ord split matches with Gaffney last year and should be competitive here as well.

126 – Could have several state qualifiers in Kaden Boyce from Ord, Tayten Eggleston of South Loup and Kearney Catholic’s Layne Shiers. Brandenburg may in fact be at 126 and if Broken Bow’s #4 ranked 132 lber Patrick Powers could make this weight then it will become one of the tougher weights of the tournament.

138 – Should be some excitement at this weight with Ord’s freshman Garret Kluthe, Zach Rogers of Kearney Catholic who is a returning state qualifier, and Cooper Brass from Broken Bow who is down a weight from 145 last year and who qualified a few years ago. Max Nordmeyer of Malcolm qualified for state in 2016 at 126 lbs and may wind up at this weight as well.

145 – #5 ranked Caleb Weiss of Chase County may be up at a heavier weight this season. If that’s the case then this could be a pretty open weight class.

152 – #2 Joel Myers from Broken Bow headlines this weight class. Chase County’s Trevor Peterson who qualified at 132 last year may also be at this weight. Dylan Zoucha from Malcolm and Clayton Shoemaker from Ord add some solid depth to this weight.

160 – Several quality wrestlers could potentially end up here. #6 Ryan Haskell from Madison leads the field. Wouldn’t be surprised if Weiss is at 160 to start the season. Tucker Schneiderheinz from Central City will surely factor in at this weight class after winning 38 matches last season. Greg Flack of Malcolm is a returning state qualifier and Lathan Duda from Broken Bow is a highly touted freshman looking to break through a tough weight class.

170 – no returning qualifiers at this weight. However it will be interesting to see how Broken Bow freshman Kaden Powers begins his season. Jesse Ulrich from Ord had a successful youth career, but this will be his first high school year on the wrestling mat as a junior.

182 – Malcom’s Haydn Deinert comes into the season ranked #3. Stiff competition awaits as returning qualifier Jacob Lech of Ord leads a pack of talented wrestlers lined up to compete here. Matthew Feldner from Kearney Catholic notched several quality wins last year and could be here or 170 this year. Isaac Dodge from Broken Bow and Evan Fisher of Chase County should also line up at this weight.

195 – #1C and #1D Ethan Gabriel and Beau Wood is the headliner but there are several others at this weight looking to play spoiler. #5C Noah Carlson of Central City should be back at 195 lbs this year. Returning qualifier Caine Haarberg out of Chase County and 2016 Jacob Gappa out of Kearney Catholic may also be at this weight.

220 – #1C Eli Hinojosa from Chase County could possibly start the season at 285 or possibly be there all year as he’s signed on at Chadron State to potentially compete at 285. #5 Treyvon Brooks out of Broken Bow and Hunter Kocian of St. Paul both are returning qualifiers at this weight from last year.

285 – If Hinojosa competes at 285 he’ll likely have to go through Broken Bow’s Drew Drake, who won a match in Omaha last year.

O’Neill Invite: 160 is shaping up to be a great weight at the O’Neill Invite. B#1 Cauy Shaw of O’Neill, C#2 Caleb Long from Valentine, #5B Trey Schafer out of Boone Central and possibly C#3 at 170 Chase Becker from Southern Valley could all be at this weight. Other potential ranked matchups include #1 Gage Krolikowski and #6 Wyatt Smydra from Norfolk Catholic at 126 lbs, #1 Jordan Kelber of Valentine against #3 Cody Yawn from Pierce and #3C Sam Cantu from Norfolk Catholic vs #5D Jade Buss of West Holt.