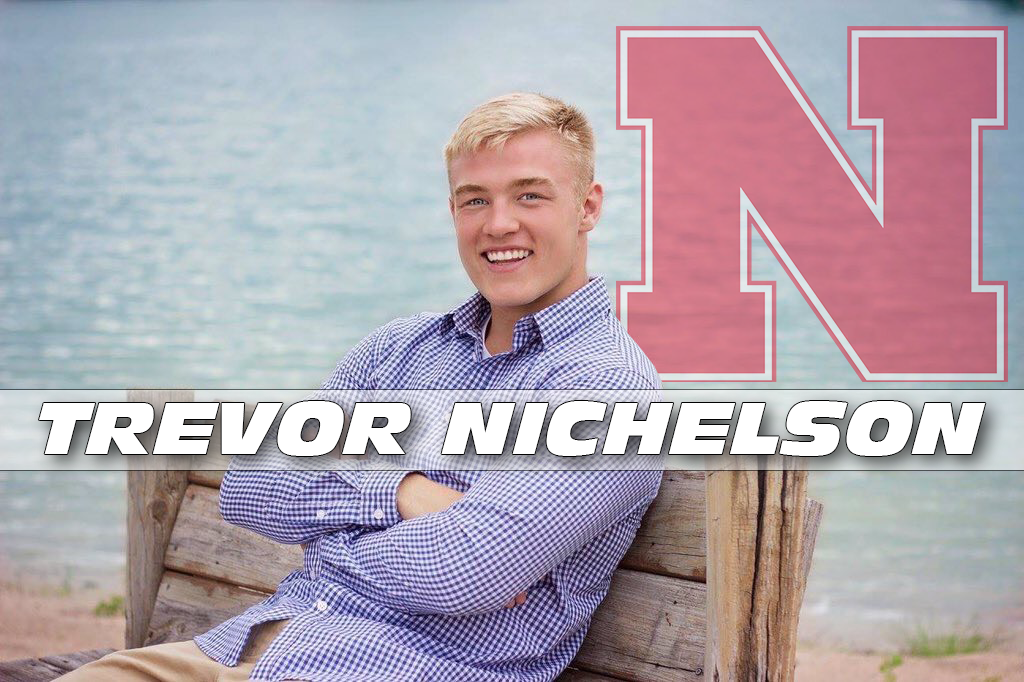 NEwrestle: Congratulations on making your college decision! What were the deciding factors that led you to choose the University of Nebraska-Lincoln to continue your wrestling career?
Trevor Nichelson: Lots of factors went into the decision: trusting the program to help me reach my potential, growing up wanting to be a Husker, and liking the academics and engineering program.

You went from losing in the blood round as a freshman, to winning a state title as a sophomore and junior. What changes did you make that allowed you to make that jump?
I started going to MWC after my freshman year and began wrestling Freestyle and Greco. I really just dedicated my entire summer to wrestling and finding competition. That summer, I probably got the most mat time and it really gave me the confidence to go out and compete with anyone and beat anyone.

You broke all kinds of football rushing records this season. Did that make it hard to choose wrestling over football at the next level?
I like both sports, so choosing one is hard knowing I will never do the other again after high school. In football season, it was pretty hard to not consider playing in college. I took a long time to consider all of my options and make sure I was 100% confident in my choice. I finally decided that wrestling at Nebraska would be the best fit for me.

How did wrestling help you on the gridiron?
I think wrestling helped me with mental toughness and just fighting and giving 100% and never quitting. Wrestling also helped with good form for tackling on defense, and balance while running the ball to break tackles and get yards after contact.

What are some of the challenges you have faced so far in your high school career?
Not a lot of challenges, I’ve been very fortunate to have a healthy, supportive family and good home life. My biggest challenges have probably just been small injuries in seasons. Things like opponents and certain matches don’t really seem like challenges to me. If anything, difficult opponents and matches just help me to see where I need to improve.

When you began your freshman season, did you have goals to win more than one high school state championship?
Coming into freshman year, my goal was to win four if I could. My goal is always to win every match. However, knowing that losing was a big possibility, a big goal of mine was to win at least two state championships since that was the most anyone has ever won at Ashland. There is definitely some motivation to work hard and earn a third title.
You have an opportunity to win your third state title this season. What do you need to focus on this season in order to do that?
In order to win a third state title, I need to focus on getting everything I can out of every match and every practice. I need to focus on respecting all opponents and improving myself as much as I possibly can throughout the season.
What are your goals for your senior wrestling season?
My goal for my senior season is an undefeated season and a third state championship. Also, to push myself harder than ever before, and come out of my senior season at the highest level I’ve ever been.
You’ve been on many Nebraska USA Wrestling national teams in all 3 styles of wrestling in the past. What has your experience been like on those teams?
My experience on National teams have been great for keeping me hungry and wanting to improve. Finding people to beat you is always good when you hate losing. The exposure to the level of wrestling around the nation has put into perspective for me where I stand and where I need to get to, in order to be successful at the next level.
How has Freestyle and Greco training and competing helped your Folkstyle wrestling?
At first, Freestyle and Greco was just a nice change within the sport to learn new things, new styles, and bring some fun back into the sport. Greco really helped to improve my ties for set ups and throwing motions. Freestyle and Greco both helped to improve how I move on the bottom. Freestyle specifically has helped me to improve my leg attacks. Overall, Freestyle and Greco has made me more comfortable in all positions.
When your high school career is over, what words do you hope people use to describe the way you competed?
Relentless, aggressive, dominant, and humble.
In your spare time, you are a Pokemon master. What is it about chasing Pokémon that grabbed your attention?
Pokémon is super popular in Ashland because it’s awesome, and who doesn’t want to be the greatest Pokémon trainer?
Is there anyone you’d like to thank?
I’d like to thank all my coaches for sacrificing their time to invest in me and get me where I am today. Also my parents for always finding a way to give me the things I need to succeed and funding my many trips and camps.

One thought on “Trevor Nichelson Commits to University of Nebraska-Lincoln”