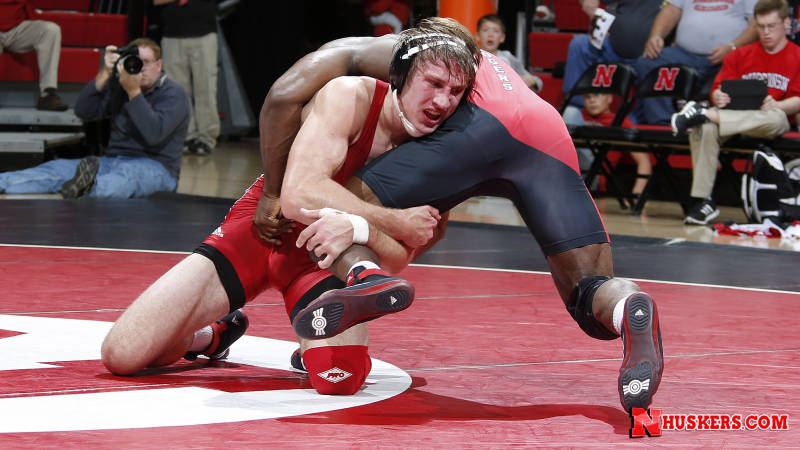 The 2016-17 Husker wrestling team returns two All-Americans and five NCAA qualifiers who won two or more matches at the big dance in 2016. All seven of these starters will stay at the same weight classes. NCAA finalist TJ Dudley and fifth place finisher Eric Montoya both entered the 2016 NCAA tournament as the seventh seeds in their respective weight classes. In the NCAA semifinals, Dudley won a tight 9-6 match over Iowa’s Sammy Brooks to avenge a loss from the Big Ten Finals. Montoya lost in the NCAA quarterfinals, and also avenged a loss in the very next round to guarantee All-American status. This win was over Ryan Taylor of Wisconsin, who ended Montoya’s 2015 NCAA tournament in the exact same round.

The three weight classes that will be hotly contested are 125, 141 and 165. The range of styles at each weight class makes the chore of guessing the eventual starter impossible this early in the season.

At 125, Lambert is the favorite since he has the most experience at this weight, and has been one of the most dedicated members of this senior class. His methodical and smothering style is at the opposite end of the spectrum as his main challenger Kris Williams. This three-time state champion from Illinois is built like a fire hydrant. His explosiveness allows him to score from the outside, but he has a handful of attacks from his front headlock that can end a match in seconds. Grand Island native Mitch Maginnis has made continuous strides heading into his 4th season for the Huskers and will provide depth.

At 141, Junior Colton McCrystal has the most experience of this group. He backed up Eric Montoya last season, and started at both 133 and 141 two years ago. McCrystal is savvy in all positions and has certainly earned his keep in the Husker wrestling room. Collin Purinton was a two-time Oregon state champion and won 24 matches last year as a redshirt. Taller than most at 141, Purinton uses his range effectively and is deceptively strong. True Freshman Chad “CJ” Red is also in the mix. As a high school senior, Red was the top-ranked wrestler in the entire nation at 132. He won four Indiana state titles and finished with an astounding 183-0 record. Red’s combination of explosiveness and ability to scramble is deadly. Red’s body type is similar to McCrystal, as they are shorter and stockier than Purinton.

At 165, there are four wrestlers who have a relatively equal opportunity to represent the Huskers at the Big Ten Championships in March. Justin Arthur started at 149 for the Huskers two years ago, and used last year to redshirt and add considerable muscle to his long frame. Arthur can scramble and ride legs with the best, and his style clashes the most with the other contenders for this weight class. Redshirt freshman Regan Bye is the tallest at this weight class, and his unorthodox style on his feet allows him to attack both sides of the body and keep opponents guessing. Another redshirt freshman in the mix is two-time North Carolina state champion Jaquon Sowell, whose attributes are his explosiveness and pace. Sowell wasn’t heavily recruited as a high school senior, but has proven to the Husker coaches that taking a chance on him was wise. Dustin Williams made two dual meet appearances last season, and is a grinder. He moves forward in good position as hard as he hand fights, and has a gas tank that allows him to do so.

Jordan Shearer, a six-time state champion from North Dakota will occupy the 149 spot and step in nicely for four-time NCAA qualifier Jake Sueflohn who graduated last May. Shearer has a somewhat similar style as Sueflohn as he pressures opponents into his counter-offense attacks as well as creating his own attacks.

Like Lambert, Collin Jensen has qualified for the NCAA tournament in each of his three seasons and look to cap a successful career with an All-American finish. In the offseason, Jensen has vastly improved his hand fighting skills to compliment his quick low singles and ankle picks. When Jensen gets on top, he can rack up points in a hurry with his ability to ride legs.

At 197, Nebraska native Aaron Studebaker has qualified for the NCAA tournament the last two seasons, and has been ranked inside the top seven in most preseason rankings. His work-ethic, stinginess on his feet, and torturing demeanor in the top position should put him on the podium at the NCAA tournament.

At 157, Tyler Berger made the blood round at NCAA’s in 2016, and is ranked in the top-ten in most preseason rankings. After a consistent off-season in the weight room, he’s a full-sized 157 and with a few improvements can contend for an NCAA title.

Micah Barnes has found a home at 174 after being at 197 two years ago. He qualified for the NCAA tournament last season at 174, and like Lambert and Jensen, he expects to be on the podium in March. Barnes is confident, strong and explosive. When he stays on the attack, he is hard to beat and has the tools to finish his career as an All-American.