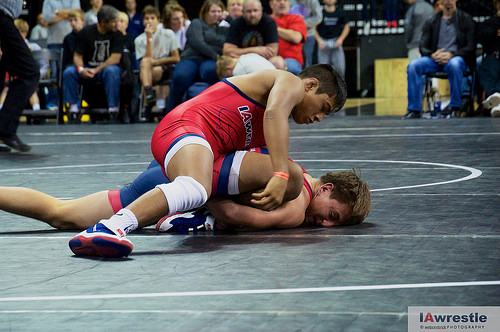 Illinois prep Jason Renteria has given his verbal commitment to the University of Nebraska. Renteria, who wrestles for powerhouse program Oak Park River Forest, is currently the #1 ranked 132 pound wrestler in the nation by Flowrestling.

I will be taking my athletic talents and academics to the University of Nebraska. Edit skills by @theblackcard125 pic.twitter.com/PRl0GbxHof

In making his commitment to Nebraska, Renteria gives the Huskers their second top 50 recruit, joining #5 overall Mikey Labriola of Pennsylvania. Renteria is ranked #33 overall in the class of 2017 by Flowrestling.

As a sophomore, Renteria had committed to wrestle for the University of Iowa, but backed out of that commitment in early July. Immediately Renteria listed Nebraska as an option along with Illinois, North Carolina, Missouri, and Penn State.

Competing at 132 pounds, Renteria will project as a 133 pound wrestler for Nebraska. Fans can also catch Renteria in the Night of Conflict 2 in the fall.