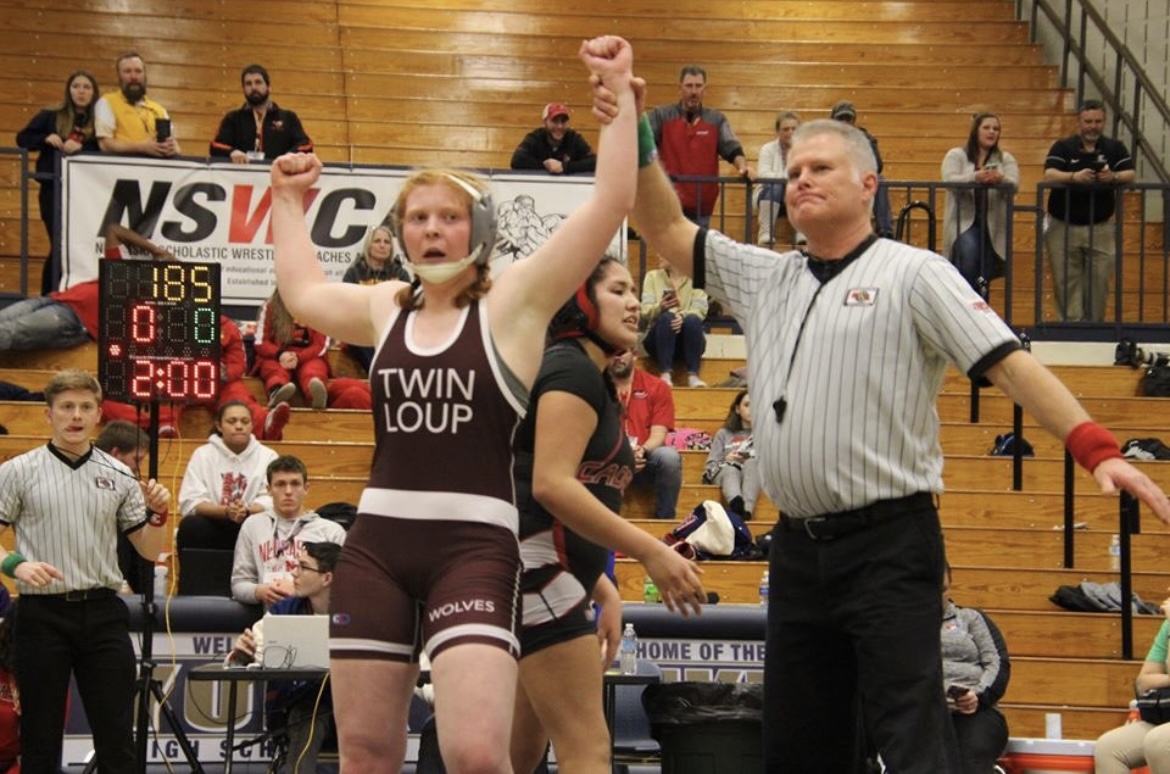 NEWrestle announces the 2021 scholarship winners to one female and one male wrestler from this year’s graduating class. These recipients carried themselves in their communities, in the classroom, and on the wrestling mat. This year’s winners are Ally Micheel from Sargent High School (Twin Loup) and Evan Canoyer from Waverly High School.

Ally Graduated this weekend from Sargent, third in her class and maintained an average grade of 98% in her four years of high school. She was faced with many obstacles along her journey and over came every one of them. Ally wrestled when she was younger but then started to play basketball. That is where she faced adversity for the first time. She tore her ACL in eighth grade. She says “I tried to come back to basketball, but it just didn’t feel right. Wrestling is a sport I had loved since I was a kid. I went back out my freshman year and had a really good year going 20-5.”

She was poised for a big sophomore season but was hit with adversity again, she tore her other ACL in a freak accident when her foot got caught in the stirrup on her horse. She would have to battle through that injury.

Her junior season she was finally healthy, and she proved how good she is when healthy. Ally went on to win the state title in the inaugural NSWCA Women’s State Championships. The biggest obstacle Ally overcame was the fact that Nebraska did not have a women’s state wrestling tournament.

Instead of waiting for something to happen, Ally took charge saying “I wrote a letter to the state about my experiences in wrestling and how it affected me, and many other female wrestlers across the state. I was shocked when the letter went viral, and I was getting responses from as far away as Florida.” Ally was a big influence and helped lead a charge that got women’s wrestling on the radar of NSAA when it passed as an emerging sport. This past season they had the second state tournament where Ally finished in third despite wrestling with a torn labrum.

Ally will be attending Laramie County Community College in Wyoming next year. She says “I will head there then hopefully be going to South Dakota State where I can finish my teaching degree in agriculture. I also will be getting my coaching certificate. I want to be a wrestling coach. I am sure I will have to start in a small school so I do not know if they will have a women’s program, but I will help out with the boys. Eventually I would like to be the head coach of my own women’s team that I can take to the state tournament.” Ally has followed through on everything she has set her mind too, so this will be no different in her journey. It would come full circle for her as one of the pioneers of women’s wrestling in Nebraska to being a coach taking a team to the state tournament.

Our male winner is Evan Canoyer. Evan is number one in his class at Waverly with a 4.0 GPA. He is a UWW All American, Fargo Freestyle and Greco All American, a three time state finalist and two time state champion. Evan finished fourth as a freshman, second as a sophomore, and won state as a junior and senior. He compiled a 171-4 record in his career. He was also an all-state football player his senior season.  Evan will be attending Cornell University in New York.

Evan had many offers in football and wrestling but ultimately decided on Cornell as being the right fit for him. He talks about his future plans saying “When I head out there, I plan on majoring in something along the lines of government science. I would like to go into that field, and I am very excited for the opportunity.” Canoyer will take a strong academic background with him to the Ivy League school. He has had straight A’s his entire high school career, something he credits to his mom, saying “If I got a B, she would be on me, so I know better to keep my good grades. She knows I’m capable of getting all A’s. Its not about just having a 4.0, it’s having the ability to maintain that. She knows I have that ability so she has been on me. So that’s all on her.”

Canoyer has had to make many sacrifices to get to the place he is in now. One of those included quitting Soccer. He has had to balance football, wrestling, and academics since freshman year, and it has been a process. “I am just thankful for the sacrifices I have made to be a part of this sport and with this club. MWC has been beyond great to me, and my high school too, it has been a grind. I am thankful I made the choices I did. I had the mentors and people to push me in the right path. It has been a blessing” Evan says. Before heading off to New York, Evan will have one more big event coming up when he heads to Fargo in July.

Ally and Evan showed great potential on and off the mat. They have been strong in the wrestling community. They are two people Nebraska can be proud of for being great ambassadors of our sport. They both will leave legacies behind them that will not be forgotten soon. They will each receive a $500 scholarship. Congratulations on your careers in Nebraska and cant wait to see what the future holds for each of you.

Congratulations to our male recipient of the NEWrestle Scholarship, Evan Canoyer. He is #1 in his class, carrying a 4.0 throughout HS. He is a 2X state champ, three time finalist. Evan also earned UWW and Fargo All American status.

Congrats to our female recipient, Ally Micheel. The senior from Sargent battled adversity and became a state champion in the inaugural NSWCA women’s state championships. Ally was also a pioneer in getting Women’s Wrestling passed as an emerging sport by NSAA.