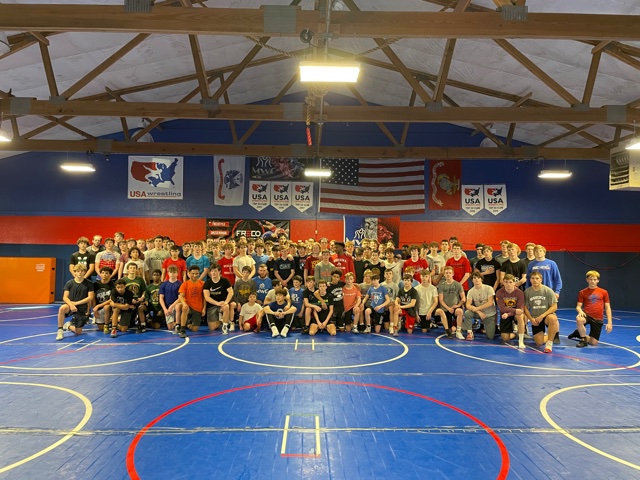 For many wrestlers, last week’s state championships were the end of the wrestling season for eight months. For MWC in Papillion, The last three months were a warmup.

FRECO represents a mixture of Freestyle and Greco, the two different style of wrestling held in the Olympics. So training is a year-round process, outside of when wrestlers are in their high school season. The wrestlers got a week off after state, but now they return to club practices to start preparing for national competitions.

MWC wrestlers have been through this before. These tournaments are what puts them on college coach’s radars. There have been a lot of wrestlers who have built momentum from their FRECO seasons. MWC wrestlers, Joel Adams, Antrell Taylor, and Tyler Antoniak were U15 world medalists. Conor Knopick was a Cadet Greco world team member and just won the Junior Greco championship back in November.

Many of these wrestlers helped Nebraska to a top five finish in Greco and top ten finish in freestyle at Fargo in 2019. Fargo is the toughest freestyle and greco tournament in the country. It’s where the top high school wrestlers in the nation and sometimes other countries go to prove themselves against the best. There will be many competitions these wrestlers head to over the next several months, that could land them on world teams. Everything will conclude in July at Fargo for the Junior and Cadet Freestyle and Freco Championships.

MWC is a club that has many state medal winners from all over the state (and also Iowa) pushing each other throughout the year. Being in that environment really helps wrestlers train for the college level. Nick Hamilton says “MWC treats practice like a college room. Everyone is pushing themselves. It is a tough room with a tough group of guys.” Garrett Grice adds, “There are a bunch of dudes ahead of me who are having success in college. It makes me less nervous heading into college, because it shows that Nebraska kids are ready to compete right away. It really helps when you’re training against other D1 kids.”

Every practice, guys will get looks from different wrestlers. A 160 pound state champ will practice with a 138 pound state champ, then the next practice he could face a 220 pound state medalist. Grice talks about training at MWC saying, “It’s a unique environment. It is one of the top clubs in the country. All of the wrestlers there have their own unique style. It helps you when you train against those guys, because you can feel it and see different styles. So when you head into matches, there is less of a surprise.”

The guys talk about how MWC also helps off the mat. For Grice, he says “Zac really preaches loyalty, and loyalty to the club. So it helps me be loyal to everyday life and everyone in my life and to Virginia.” Hamilton says “MWC helps give me something to do. I don’t know where I would be without wrestling. It gives me a schedule and something to look forward to year-round.”

One of the things wrestlers get from going to MWC and competing in FRECO, is different styles of coaching. Antrell Taylor explains “It all helps a lot, different styles of coaching give you different perspectives on things. There are things I learn at MWC, that I have not learned in high school.” Antrell primary wrestles freestyle and he talks about how it helps him for folkstyle season. “Freestyle helps when you’re getting close to the edge to circle back in so you’re not giving up a point. It helps with mat awareness. It really helps your offense and gives you a new arsenal of moves.” Taylor says. Hamilton adds “Freestyle helps because it teaches you to push the pace. It helps make your technique sharper and helps with positioning because of exposure points. Greco helps you get more comfortable with upper body. It sharpens everything up when you’re on your feet.”

One of the big things Freestyle and Greco helps with, is getting to see different competition than you would see in-state. Hamilton says “it helps because you get different looks. Every tournament and every match you’re going to have tough opponents because you’re wrestling kids from all over the country.” Grice talks about the competition saying “(Wrestling freestyle and greco) helps because you see the best from around the country. In college, you’re going to be wrestling the best kids in the country, so getting to do it now prepares you for that moment. It is my goal to wrestle in the Who’s Number 1 event, so I want to wrestle all the best guys.”

These are this year’s state medalists.