Jestin Bayer of Howells-Dodge honoring late father on the mat 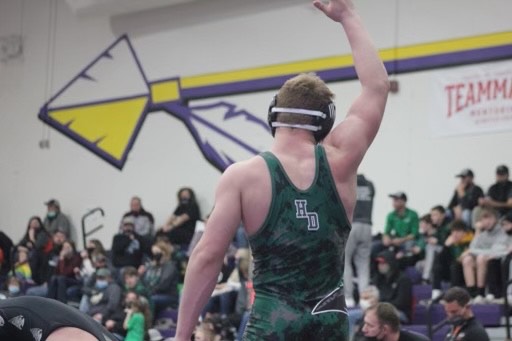 Cancer Sucks. We all know it. For Howells-Dodge wrestler Jestin Bayer and his family, they know it all too well. Jestin and his three siblings RJ, Jade and Reagan lost their father Ryan in January of 2020, to a 3-year battle with brain cancer.

As a freshman, Jestin battled a foot injury during football season and with only one week of wrestling competitions under his belt at 160, tore his meniscus. After he recovered from his injury and after his dad’s passing, Jestin selflessly bumped up to 195 to to help the team. He would have to drink a bunch of water right before weigh ins, in order to be heavy enough to compete at 195.

About a month after his dad passed away, he became an improbable district champion as a freshman at 195lbs. “Jestin won the district team title for us, by pinning his way through his bracket” said head coach Brian Jones. He made it to the heartbreak round at state, despite everything he had going against him. No doubt the Howells community and many others were proud of the effort Jestin put in after all of the adversity he faced.

This season, he has competed at a much more comfortable weight class- 170. He is currently ranked #2 in Class D. Jestin just finished in second at the D3 District Tournament behind top ranked Schutz. On wrestling at a more comfortable weight, Jestin said “I can control guys at this weight more. The guys are more athletic at 170, but they are more my size.” With two more seasons of high level wrestling ahead, the best is yet to come.

If you’ve been around wrestling in Nebraska, you’ve likely seen the names Brester and Bayer on the mats for Howells or Howells-Dodge. His relative Craig Brester was an NCAA finalist for the Nebraska Huskers. When we asked Craig about Ryan, he said “Ryan was one of the most down-to-earth guys you could meet. He would talk to anyone, and would do anything for anyone.”

The Howells-Dodge Jaguars had some cool shirts made to honor Ryan (pictured below). In regards to the shirts Jestin said “It made me happy, not sad, seeing the shirts. They brought back good memories.”

The late Ryan Bayer was a football/basketball player and loved sports. Everyone in the family has their favorite NFL football team. Sundays were always a special family day, as they all chilled out and watched football together. Ryan’s buttons would be popping off his shirt watching Jestin go at it as we wind down the season. He would certainly be proud of his effort this year.

His oldest son RJ is a standout football/basketball player. RJ had an incredible basketball game three days after his father’s passing, scoring 32 points to break the single game school scoring record. RJ was named after his Grandpa, who passed from cancer.

Ryan’s daughter Jade plays volleyball and basketball, and his youngest Reagan has been tearing it up on the basketball court as well!

Like Jestin did last season, his first cousin Mason Villwok is making waves as a freshman at Elkhorn High School. The two competed together on the middle school circuit. They’ll both be competing this week at the state tournament!