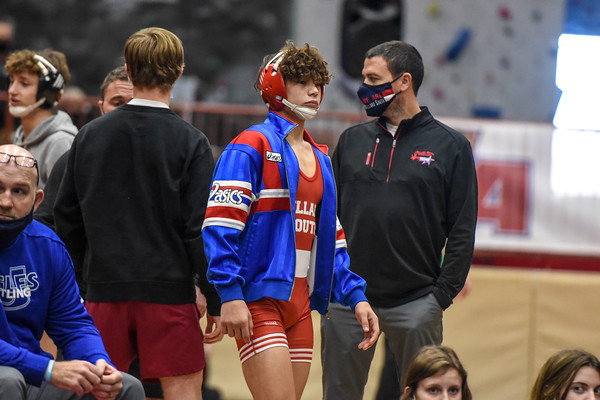 Millard South is ranked #15 nationally while Liberty is ranked #19 by Matscouts. Both teams won their respective state tournament titles last year. The two teams saw each other before the break at Indianola in a tournament that Millard South was missing state champs Knopick, Antoniak and Taylor.

This dual should be extremely close. Millard South will look to flip one of the results in the lower weights from previous meetings. A few key tossup meetings will go down at 138, 145, 170 and 285. Millard South is likely going to need three out of four of these to win the dual. Buckle up everyone!

Make sure to subscribe to our Rokfin channel to view the dual. Missouri Rankings courtesy of Missouri Wrestling.

120: #1 Caleb Coyle (9-4) vs #2 Christopher Coates (17-1)
Coates is one of, if not the top freshman in Missouri this year. He won by fall over Coyle at Indianola. If Millard South could flip one of these first three weights then that would go a long way toward winning the dual.

126: #1 Conor Knopick (6-0) vs #3 Easton Hilton (19-0)
Knopick should be back in the lineup for Millard South after missing some time with injury. Hilton was 4th at 113 in Missouri last season and has been impressive up to weights.

132: #7 Aiden Robertson (9-4) vs Jude Axsom (9-2)
Robertson finished 3rd at Indianola while Axsom ended up in 5th place. The two did not meet, but we’ll give the edge to Robertson based off of common opponent and higher finish.

138: #3 Joel Adams (12-0) vs #2 Kage Lenger (18-1)
Adams notched a huge win by getting nearfall on state runner-up Lenger 4-1 in tiebreaker OT at Indianola. Circle this one as one of the bigger head to head matches tomorrow.

145: #1 Tyler Antoniak (9-0) vs #2 Kyle Dutton (18-0)
Probably the marquee match tomorrow. Both Antoniak and Dutton are returning state champions. Since Antoniak was out with injury they didn’t meet at Indianola. Dutton picked up a win last season over Knopick at the CB Classic.

160: #1 Antrell Taylor (8-0) vs #5 Jacob Lynn (5-1)
Neither Taylor or Lynn wrestled at Indianola, but have to give the edge to Taylor in this one and will be looking for bonus points.

170: #8 Caeden Olin (12-4) vs Jeremiah Halter (14-6)
These two didn’t wrestle, but had two losses to same wrestlers. Olin finished 5th and Halter in 4th so this is one of those toss-up type matches that could decide the dual.

220: #1(195) Connor Hoy (10-1) vs OPEN
Liberty was open at this weight, but in duals sometimes Horn bumps up. Perhaps we could see some lineup shifting from Liberty if they have someone they could add in at 170/182 and shift Williams and Horn up.