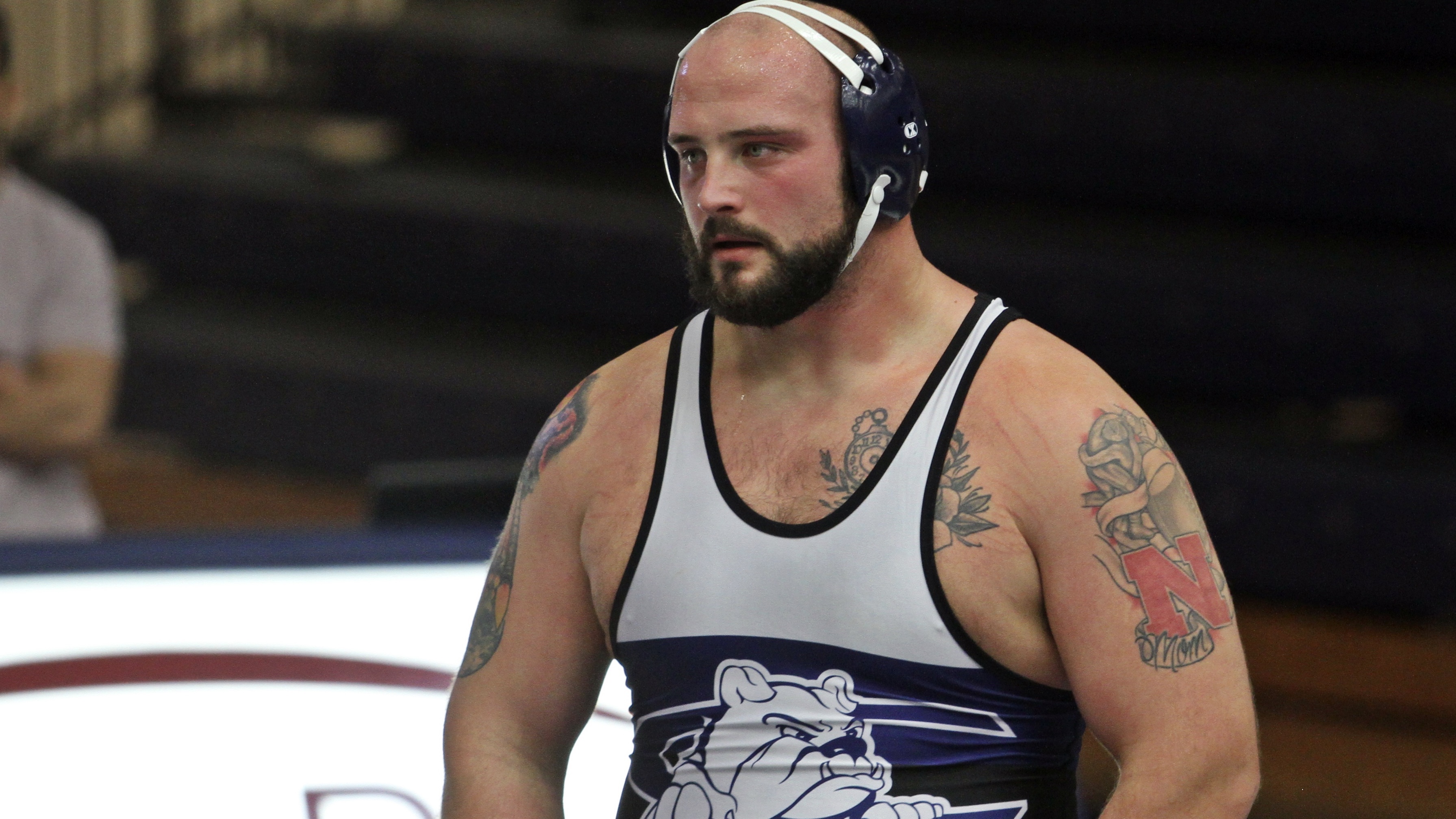 We often hear that when one door closes, another door opens. For former Nebraska football player Tanner Farmer, truer words could not have been spoken. In 2019, Farmer was coaching football for Concordia University in Seward. While recruiting about recruiting in the NAIA, he discovered that student athletes don’t get “years” to complete their athletic participation, but in fact “semesters”. When Farmer was in Lincoln playing football for the Huskers, he only played 9 semesters of football. He had 1 semester of eligibility left, and that is when his competitive spirit kicked in. Farmer loved wrestling and what it had done for him in the past, So he traded in the helmet, and joined the wrestling team.

Tanner started wrestling when he was young. He said “I was a bigger kid, and I was playing football and I had a football coach, Bill Weber, who had a kid my age and he wrestled. He told my father, that wrestling was a great way to not get big. I was a chunk, so I went out. After 2 years, I managed to stay at 175, the same weight. As time went on and I hit puberty, I got bigger but wrestling always kept me in great shape. I loved wrestling. I wasn’t very good, but I was a quick learner.” Quick learning got Tanner far. During the summer between his sophomore and junior year of high school, he entered Fargo with one month of training in Greco. He finished as the national runner up, and added a 3rd place finish in Freestyle.

When he was in Lincoln, he didn’t wrestle at first. When Mike Riley got hired to be the head coach, Tanner joined the wrestling squad to train after the football season ended. He said “I had gotten overweight, and I was doing things college kids do. I joined the wrestling team to get back in shape. Wrestling was really good for me because I found structure again. Wrestling kept me disciplined, I also got in the best shape of my life. The following football season, I won the starting job.” That was a major turning point in Farmer’s career, as he went on to start the next 3 seasons for the Huskers.

When Farmer discovered he had one semester remaining, it was his shot to make the most of the opportunity to compete. He joined Concordia in the second semester, and embarked on his last chance to compete. He hit the ground running, going 26-0, winning GPAC Wrestler of the Year. He took his 26-0 record in the NAIA championship match, but ultimately fell in overtime. Getting a second chance to compete in a competitive sport was something he cherishes. “I wasn’t ready to be done competing. In football, I was told I couldn’t play anymore. In wrestling, it was different. No one can say if I am done competing or not except for myself. It was fun to be competing again. I got to be part of a team again. It was really special. So many seniors take that for granted, and get emotional on Senior Day. They realize it’s all over. I got a second chance, I was not going to let that pass me by. I went into this being an athlete again, I thought I was done.” Farmer said. Second opportunities are not something people get every day, and he made the most of his.

Wrestling for Concordia, Farmer forged a friendship with Head Coach, Levi Calhoun. The friendship with Calhoun brought him to this past weekend. Farmer says “Coach Calhoun is an amazing guy. He is a great friend, supportive, always texts me to check in. I was blessed to have met him, and to be coached by him. Our relationship continues to grow. I want to be able to give back and help in that room. They have given so much to me. Coach Calhoun put me in touch with Gary Mayabb to train me, and got me on the path for Senior Nationals.” Farmer had a short time to prepare, and it was going to be a quick turn around.

Farmer moved back to Illinois and started training at the University of Illinois. It is a two hour trip back and fourth to Champaign from where he is living. He only had two months to prepare for Senior Nationals. So with little time, he had to rely on his strength and conditioning. He entered the tournament as the #5 five seed. In the first match, he raced out to an 8-0 tech fall in 1:32 against AJ Nevills. He had a much more difficult second match, taking on the #4 seed, Donny Longendyke. Farmer came out on top 4-2. The third round saw him competing against the top seed, widely regarded as the number two heavyweight Greco wrestler in the country, Cohlton Schultz. It was a back and forth match, and whileFarmer nearly had Schultz pinned, he fell 4-3. Farmer went on to win his consolation semifinal match, then fell in the third place match to finish fourth.

Farmer had high expectations of himself entering in the tournament. He says “I was extremely disappointed in myself. I had beat that guy earlier in the day. I was not physically or mentally prepared for that much of a day with all the matches. I was under prepared. It was a great learning experience though. I made mistakes that I won’t make again. I was arguably right there with a top 10 wrestler in the world, I felt good about that. I was able to compete because of the physical gifts I have, but I have a lot to learn.” It was very impressive overall for how raw Farmer is. He will definitely have something to build off of.

Building for the future

Farmer will use this weekend to prepare for his future. He has one degree in hand, and he is working on two more. He also has a future in wrestling. “I signed with NYAC, now I just need some sponsorships and I plan on moving up there to start training full time. I am one hundred percent bought into Greco. I want to put myself in the best possible position. Full mind, body, and spirt to bring myself to the next level” Farmer says. He will have a lot to build on.

Farmer also had a message for football players. “I think wrestling turned me into a D1 football player. I had gifts. Wrestling taught me how to put those gifts to good use, and how to use my body in space. I think offensive and defensive lineman, even linebackers should wrestle to reach their full potential. Wrestling teaches you to use your body like no other sport can. Wrestling is such an underappreciated sport. It teaches you so much in other areas of life, discipline, and conditioning.” Wrestling can be used in so many different aspects of life. Farmer had a great football career, but his potential in wrestling is undeniable. He has a great future ahead of him.