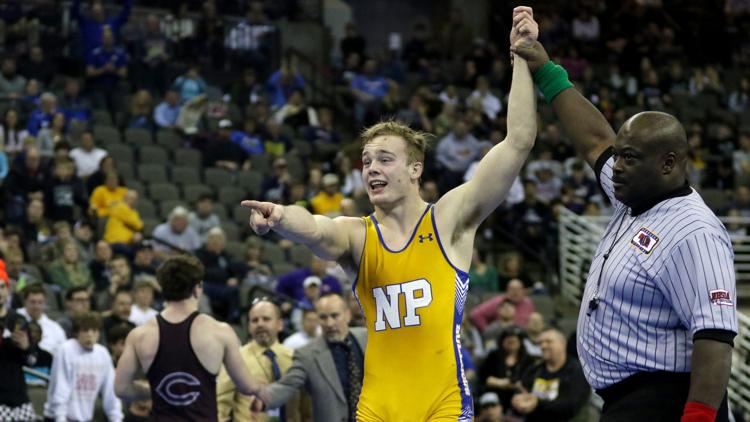 North Platte senior, Gavyn Brauer will enter this season with a target on his back. The 182 pound wrestler returns to the Bulldogs after going 36-8 last season on his way to the Class A State Championship. His sophomore season he finished in fourth in Class B 170 with a 32-20 record. He was also a state qualifier as a freshman at 138 pounds. Not bad for someone who didn’t start wrestling until seventh grade. Brauer is a three sport athlete, he plays linebacker on the football team and runs track, competing in Pole Vault. He is not only a great athlete, but he is on top of his academics with a 3.7 GPA.

Brauer has taken a different path to wrestling dominance. He is still raw to the sport. It was Coach Hall who got him to go out for wrestling. Something he is forever thankful for, is his coaches. Last year, after winning the state title he was quick to mention them in his post match interview saying “Those are the greatest coaches in the state by far. I wouldn’t even be wrestling if it wasn’t for them. In middle school they made me go out for wrestling. I was a football guy, I never wrestled in my life. Now this is probably what I am going to college for, I love (those) guys” He followed up those sentiments again this week when asked about them saying “They mean the world to me. They have paved the road, and showed me everything I need to do. I couldn’t have done anything without them.”

One of the biggest things Brauer has learned from his coaches is his cement mixer. Brauer’s ability to hit that move carried him a long way last year. In the district finals he won with his cement mixer to pick up a fall in 3:06. He again had to depend on it in the state quarterfinals. Down 11-3, Brauer battled back to 13-12 then hit the cement mixer again to pick up the third period fall. It wasn’t always pretty though, Brauer says “I picked it up at a Golden Eagles camp. I tried it out my freshman year and got pinned. My coached chewed my butt and made me drill it over and over agin” He definitely developed it quickly in the last three year.

Brauer will be a key component in the North Platte lineup that also returns 2018 state champion and 2019 third place finisher Darian Diaz, 2019 state runner up Jaylan Ruffin, Cash Arensdorf who missed state because of a torn retina last season, was highly ranked before the injury. They also picked up a transfer from Wyoming named Vincent Genatone, who finished state runner up last year. With all those guys returning, Brauer has high expectations for his team, saying “We have a really good group of guys coming back this year and I think we could really be competitive and end up in the top three.” On top of his team expectation. Brauer has big goals of his own. “I want to get another state title, go undefeated, wrestle at Fargo and I would like to add 100 pounds to my squat this year.” Fargo was one of the big events he was looking foreword to this summer before it got cancelled.

After winning the state title last year, Brauer started hearing from colleges and is continuing to do so. He has heard from UNK, Chadron State, Augustana, Western Colorado, and Nebraska Wesleyan. It has been a process and one he is excited for once NCAA lifts its restrictions. He says “I want to go somewhere with a lot of tradition. Somewhere that feels right and I feel at home.” As far as a major, he will be in education because he wants to be an Athletic Director.

He has a high ceiling with still being new to the sport. He wrestles all three styles and looks foreword to learning more about all three as he advances through his career. He is continuing to develop. Last year he won the 182 championship only weighing 172 pounds. This year he is playing football at 190 pounds and will go back down to 182 for wrestling. He has a motor that continues to run. He is never out of a match as he showed in the state quarterfinals. He will be fun to follow as the season goes along and he makes his college decision.