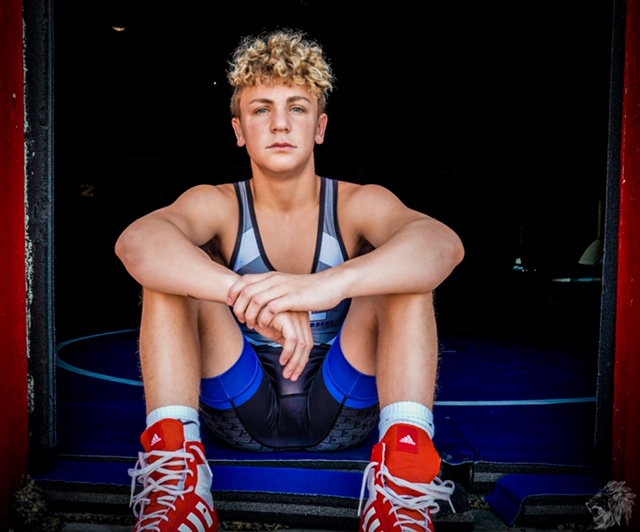 After years of hard work and dedication, Coyle is starting to see the payoff. He has competed in numerous tournaments in his career. Last summer, he was a double All-American at Fargo. He finished 6th in Junior Freestyle and 5th in Junior Greco. He also finished 5th at UWW in Greco, 6th at Pre Season Nationals and 5th at Monster Match Nationals. Heading into his sophomore year of high school, he finished in 4th at Fargo in Cadet Greco. He has garnered many accolades in his career that also included 2nd place finishes at state as a freshman and sophomore. Last February, he finally broke through and defeated Brandon Baustert in the ultimate tie breaker to win his first State Championship.

The finals match with Baustert has become familiar territory for Coyle. This year was the second year in a row the foursome of Coyle, Baustert, Archer Heelan, and Juan Pedro matching up at state. Add in Gabe Grice, and it has been a fun round robin over the years. Coyle went 50-5 as a Freshman falling to Jakason Burks in the finals. He followed that up with a 51-6 sophomore campaign, where defeated Heelan in the state quarters, Pedro in the semis and found himself wrestling Gabe Grice in the finals. He had defeated Grice the week prior in the district finals, but in a tough sfinals match, Coyle fell in the ultimate tie breaker to Grice 3-2.  This year, Coyle went 45-2 with his only losses coming early in the year to Baustert and Heelan. He avenged the Heelan loss in the state semis, winning 3-1 in overtime, before his finals win over Baustert. Coyle talked about the friendships saying “Baustert is a really good friend of mine, we’re spending the Fourth of July together and we hang out a lot. Archer and I became friends wrestling at Fargo and we have been pretty close growing up wrestling against each other. I don’t know Juan too well, but we have respect for each other and I’ll say hi if I walk past him.” It will be another fun year this upcoming year with Coyle, Pedro, and Baustert all going up to 120. Grice will be coming down to 120 after wrestling 132 last year. Heelan has not made a decision on 113 or 120.

One big difference this year for Coyle, will be the addition of his brother to the high school ranks. Even though they won’t be at the same high school, Coyle says he will still be following closely. Younger brother Cadyn will be attending Bennington High School. Coyle said “My brother has watched me my whole career, so he will be ready to go. His biggest thing is he finally getting bigger. He is weighing more than I was when I wrestled Jakason my freshman year. I tell him its a grind, five days a week. The one match you lose at the beginning of the year doesn’t mean anything when you get to state, you just have to grind.” It will be busy year for the Coyle family going back and forth, but one that will be exciting to follow.

Dealing with coronavirus has definitely put a damper on things for Caleb. He said
“I have still been able to lift 5 days a week, and I am getting bigger and putting on good weight. I am walking around right now around 128-130. I have been focusing more on lifting and getting stronger than conditioning. I feel like my conditioning was good this year, and I know I have to get bigger and stronger to compete at the college level.” When it came to school closing, he said  “it was cool, I had a lot more free time, and I kind of liked it. At the same time, I feel like I should have been in school. I think there will be a drop in ACT scores because the teaching methods are so different when we’re not in school.” It also has made it more difficult in recruiting. Last week, the NCAA pushed back the official visit date to August 31st, so it has been a lot of zoom meetings and getting to know coaches for him this summer. He looks forward to the day he can get to campuses.

It will be a busy time for him when he finally does get to visit schools. Prior to coronavirus, he was hoping to make a decision before the school season started. Now he said he is not sure when he will make the decision. On Wednesday, Coyle received his first division one offer and he said he has been hearing from a lot of schools. “I have been hearing from Nebraska quite a bit, and I have talked to Virginia a lot. I also have been talking to Air Force, Northern Colorado, Arkansas-Little Rock, North Dakota State, Oregon State, Wisconsin, Augustana and George Mason.”  He remains wide open now until he can take visits, but he said he is having good conversations. Some of the things he is looking for in a college are  “I want to make sure I like the school I am going to and the part of the country it is in. I want there to be light weight coaches, and coaches I can wrestle with. I want to also make sure its financially affordable for me.” As for a major, right now he looking at Computer sciences. That’s what his dad does, and is something he has taken an interest in. He is not dead set on it, but it is the path he is leaning toward.

Coyle will be putting himself out there in a big way when they are able to compete again. With Virginia Beach, UWW, and Fargo all being cancelled, he has not been able to compete in front of the coaches, but he plans to attend Super 32. Depending how that goes, he said he will wrestle Pre Season Nationals and probably Monster Match. Coyle has been a hammer in all three phases of wrestling. He has been a leader and a well respected wrestler throughout his career. He is an example of hard work, grit, focus, and fortitude. A lot of eyes will be on Caleb to see if he can add another state title, get to the 200 win mark, and to see where he will choose to spend his college career.