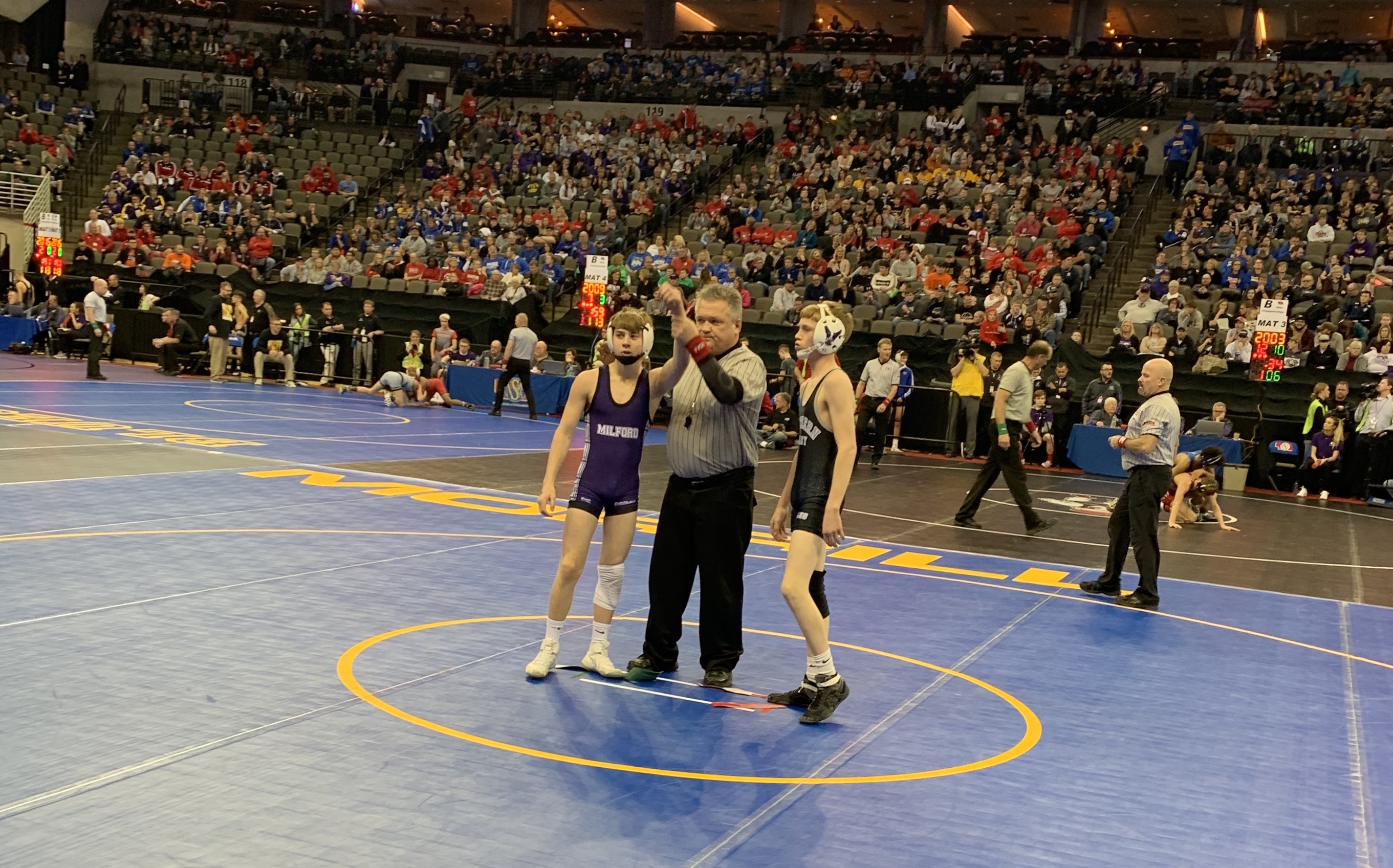 These two met twice at the Norm Manstedt Invite in January. The first match Arlt was trailing by two and got a takedown and back points in the last 15 seconds to win 7-5. The second match it was tied 2-2 before Arlt got the takedown and the fall. The winner of this match would be favored in their quarterfinal match as well.

The first of two ranked matches in the first round at 113. Returning qualifier from 106 Dozler will take on returning medalist from 113 Hilmer. Look for this one to be close and somewhat low scoring with the winner having a good chance at making the semifinals.

Like Hilmer in the other match, Musser exits the loaded C4 113 bracket. Five of his six losses at 113 are to top three guys and the other is to Hilmer who he has two wins over as well. Schluckebier hasn’t lost to a Class C opponenet this year and is coming off of a big district final win over #4 Dozler. A win here should eventually lead to a semifinal match with #1 Benavides.

Should be in for an exciting first round match here. Vondra was a match away from medaling at 113 last year. He spent most of this season injured before navigating the ultra tough C3 120 bracket which saw a ranked wrestler not qualify. Mueller is the third place finisher from 113 last year.

This one went into overtime at the state duals so we can expect another close match. The winner of this match will be on a good track to medal regardless of the outcome of the quarterfinals.

2018 medalist Belville has had an impressive season including one win over #3 Escandon. Escandon has a win over Zitek this year. Winner here will have #1 Williams in the quarterfinals. If that’s Zitek then it will be a rematch of last year’s 113lb finals match and a close one from state duals.

This one isn’t a ranked match, but the winner would have an unranked opponent in the quarterfinal as well and would have a good shot at making the semifinals. Valencia missed almost the whole year due to injury, but appears to be in good form since his return. Patak beat #8 Chini in OT to finish third in his district and has been in an out of the rankings this season.

These two met at the state duals with Lade winning a 4-1 match. Lade also beat potential quarterfinals opponent Williams at the state duals so the winner here has a good chance of going through to the semis. This one is also important for Valentine from a team perspective.

A lot of talk this season as many of the top wrestlers from 138 moved down to 132. These two find themselves in a big first round matchup with the winner not getting much room to breathe as #3 Bryce is  the likely opponent in the quarterfinals. The reality of 132 is almost everyone in this weight is medal caliber. It will be one of the most exciting to watch this weekend in all rounds.

Two wrestlers from opposite ends of the state will meet in first round with the winner having a decent chance at a state medal. As far as the score goes this one is hard to predict due to lack of common opponents, but both are skilled wrestlers and should provide a good test for #8 Barlean in the quarterfinals.

Both seniors looking to start off their final state tournament on a high note. The winner of this one should have a good chance at a medal at one of the deeper weights in Class C.

Pretty exciting first round match. Out of Calleroz losses, six of them are to D#1 Coons and C#3 Kluthe. He also split with D#2 Gunning. Can’t count him out against the higher ranked Kreiemeier in the first round. It wouldn’t be surprising if both of these guys still end up with state medals.

Winner of this one sets themselves up well for a state medal. Vrana has been trending up the latter half of the season and with #4 Halverson not wrestling at districts is the de facto #8 guy at the weight.

The first of two great first round matches at 170. Drahota pulled the upset over #4 Batteshaw at districts in dominating fashion and will need a similar peformance in the first round. Hoesing was a qualifier at 182 last year and has been great wrestling 170 this season. Expect a close one between these two with identical records.

Like Drahota, Meyer picked up a win over #4 Batteshaw at districts. Zoucha beat Hoesing at districts before dropping his finals match to #2 Brandt. The winner will likely face #1 Vodicka in the quarters. The loser still appears to have a good shot at the heartbreak round and a potential match with the loser of Hoesing/Drahota. Zoucha won opening weekend match convincingly over Meyer.

Big team race match in the first round and also a rematch from Valentine Invite in December. Stokebrand won that match 4-2. Allen has been ranked as high as #4 this year. Should be another good one between these two.

The two newest entries to the rankings at 195 will do battle in round one. Ames didn’t wrestle for third place at districts but we’ll assume he’s good to go for state. Ames lost in OT to #3 Booth in the district semifinals. Beeson moved up from 182 in mid-January and has seen a lot of success at 195. His only losses are to #1 Gabriel and D#2 Pofahl at 195.

The top side of 220 is loaded with five out of the top six in the state. Scheer and Beaver both lost to lower ranked wrestlers at districts and will need to bounce back in the first round in Omaha to keep their title hopes alive. It won’t get easier as the road to the finals will go through #3 Potts and #1 Cone assuming those two are able to navigate their early matches.

No prior meetings between these two. Hoevet’s losses are to #1 Jerabek 3x and one outlier to Hyson from Fairbury. Escobar has the head to head win over Hyson so don’t count him out of this one. Winner will have #3 Ingwersen in the quarters.

No prior meetings between these two either although Miller does have some common opponents over Nordmeyer. Winner will likely see #1 Jerabek in the quarters. Loser will have a tough road to medal that starts through formely ranked Smith of Sutton.