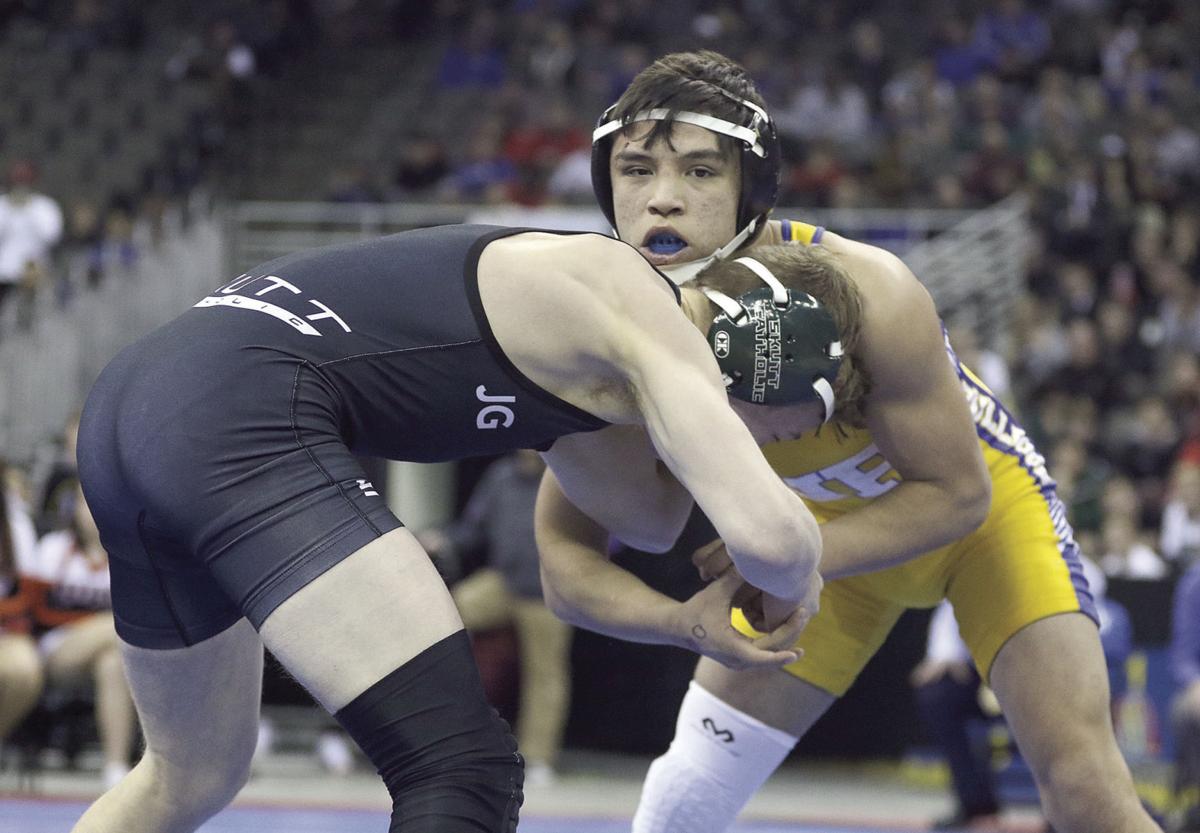 Last week we saw the majority of Class A in the Metro and Heartland conference tournaments. Millard South won the Metro with 250 points, nearly 90 points better than runner up Papillion LaVista. All 14 wrestlers placed with Caleb Coyle, Tyler Antoniak, Antrell Taylor and Isaac Trumble taking home championships. Kearney won the HAC tournament with 228 points, outlasting Lincoln East by 11 points. The Bearcats had 13 placers with Brayden Smith and Guage McBride taking home titles. North Platte went out to Wyoming and competed in the Trojan Borader War duals. Jaylan Ruffin and Darian Diaz went undefeated on the day.

Class A Wrestler of the Week.

Caleb Connor from Papillion LaVista South is this weeks wrestler of the week. After competing for most of the season at 152 pounds Connor moved up to 160 and won the Metro Championship with a 3-0 victory over #2 Deson Stapleton from Burke. He also defeated #4 (170) Ethan Valencia from Millard West in the semifinals by fall. Connor’s weekend landed him at #2 in this week’s rankings.

Class A Team of the Week.

Millard South continued their dominance this season. They had 14 placers at the Metro’s The aforementioned Coyle, Antoniak, Taylor and Trumble won first. In second was Conor Knopick and Scott Robertson. Joel Adams and Ian Byington finished in third. Fifth place had Connor Hoy, Chris Wortman and Blake Smith. Aiden Robertson finished in sixth. Bryce Jackson finished seventh. Austin Sloger finished in eighth. South’s 250 points was 90 points better than the runner up. The Patiots had 27 pins in the tournament.

Class A Freshman of the Week.

Tyler Durden from Papillion LaVista South has already had an impressive freshman campaign. On Saturday he continued his hot streak finishing in third in his first Metro Conference tournament. After losing in the semifinals to Bryan junior, Mohamud Abdi, he battled back for a third place finish. He defeated #5 Avery Russell in the consolations semifinals 6-0 before defeating #6 Logan Edwards by major decision 12-4 in the third place match.

Class A Top Ten-Where can you find them?

#1A Isaac Trumble (Millard South) vs #1B Grady Griess (Northwest)

A rematch from The Fracas. Two nationally ranked wrestlers going at it in Plattsmouth. Trumble got the first period fall in their first match up. Expect Griess to attack the match differently. It will be another good battle of two titans.

#2A Darian Diaz (North Platte) vs #2B Trevor Reinke (Beatrice)

After missing the first half of the season, Diaz has not missed a beat in his return. He will have a tough match up with Reinke from Beatrice who has been wrestling tough all season and coming off an impressive off season.

#4A Brayden Splater (Norfolk) vs #2B Izaak Hunsley (Hastings)

Hunsley has already knocked off a number of ranked wrestlers from Class A, including a 4-0 victory over Splater at The Fracas. Splater finished runner up at the HAC tournament last weekend and will look to ride that momentum into this weekend

#1A Gavyn Brauer (North Platte) vs #1B Damen Pape (Hastings)

Brauer took over the top spot after pinning the former #1 Daylon Keolavone from Grand Island a little over a week ago. Now he gets Class B #1 Damen Pape. The returning state champion has yet to drop a match this season and will look to remain undefeated.

#1A Antell Taylor (Millard South) vs #2B Noah Talmadge (Ralston)

Taylor is still fresh off his return for the patriots after a football injury. He will potentially wrestle against off season teammate Talmadge from Ralston. The two wrestlers are very familiar with each other and will get to battle it out in Plattsmouth on Saturday

The two teams will face off for a second time this season. They will also wrestle Saturday at the UNK Midwest Duals. Kearney won this match up at the Fracas 48-29. Both teams will look different this time around with weight descents and guys coming off of injuries. There will be a few of ranked matchups to keep an eye on. Kearney enters the dual with eight ranked wrestlers while Columbus has seven.

Round 1 Columbus vs Gretna, Central vs Broomfield

Round 2 Columbus vs Kearney, Gretna vs Broomfield

Round 3 Kearney vs Broomfield, Gretna vs Central

Round 4 Kearney vs Central, Columbus vs Broomfield

Round 5 Kearney vs Gretna, Columbus vs Central