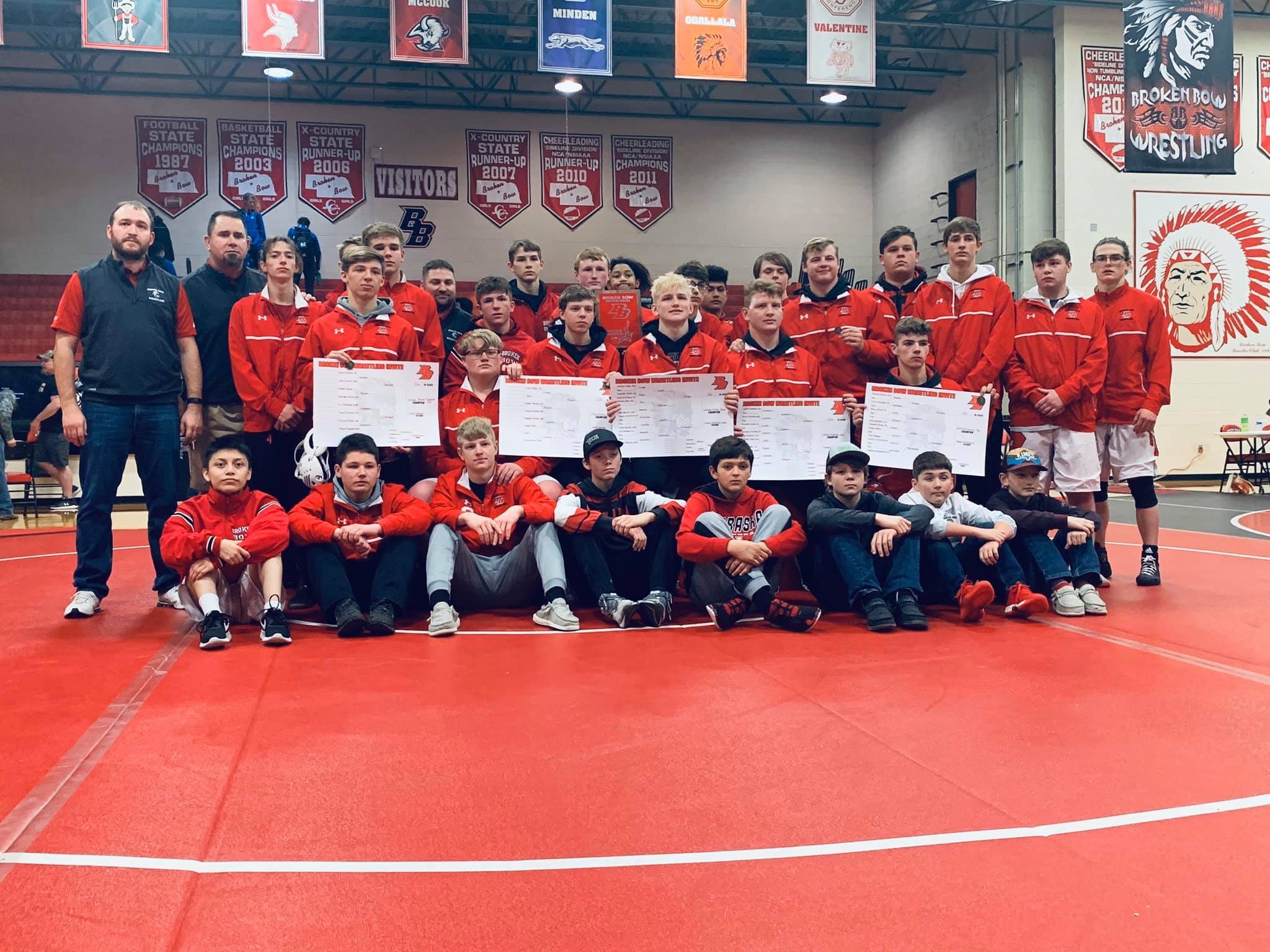 Top Individual Performances from week one:

4. 126: #3 @ 132 Isaiah Shields (Amherst) over D#1 Wood 3-1.
– Wood and Shields are no strangers to each other. They’ve traded wins against each other over the past few seasons. This match went in favor of Shields over returning state champ Wood. Shields will remain at 126 and teammate Frank will stay at 132.

3. 106: #4 Riley Waddington (Wood River) over #1 Edwards by fall
– The lightest weight this year is going to be fun to watch unfold. Waddington came up with the come from behind pin after trailing 6-2. With no state medalists at this weight from last year Waddington and Edwards are both firmly in the mix.

2. 132: #8 Logan Bryce (Raymond Central) over #1 Escandon 3-2 SV
– In the Class C season preview it was noted the Logan Bryce had a lot of upside. That seems like a bit of an understatement now as he beat returning C126 champ Escandon after beating a tough Jaixen from Lakeview in the semifinals. Watch out C132!

1. 170: #2 Burton Brandt (Syracuse) over B#1 Canoyer by fall
– Burton Brandt pulled off a shocking win over Class B title favorite Canoyer in an opening night dual. Nationally ranked, Canoyer’s track record speaks for itself and this is a monumental win for Brandt.

Class C Team Recap – How Did They Fare?

1. Valentine finished 2nd to SD Class A Chamberlain at the O’Neill Invite, and probably would have brought home a tournament title if Battershaw didn’t get injured.

2. David City competed against some of the top teams in the northern part of the country in Montana. They finished 12th out of 25 in the tournament portion of the event and had six top-8 individual finishes.

3. Aquinas finished 3rd behind A#2 Columbus and B#9 Bennington at the Bennington Invite. They were just 11 points behind Bennington and 20.5 behind Columbus.

4. Archbishop Bergan was runner-up at the Howells-Dodge Invite. They finished 57 points ahead of D#6 Howells-Dodge.

5. Broken Bow outlasted #8 Ord by 9 points to win their home invite without the services of #3 Faulkenberry.

6. Logan View finished second to returning Class B State Dual champs Blair by 21 points without #6 Martin Valencia in the lineup. They finished ahead of B#3 Arlington and A#9 Westside.

10. Amherst won the Ravenna Invite by over 50 points without #3 Jarin Potts in the lineup.

106:
We knew this weight would be interesting to watch unfold this season and it didn’t take long for the fireworks to happen. #4 Waddington knocked off #1 Edwards. The match had some good scrambles and Waddington was trailing 6-2 before getting the reversal and the pin. #5 Aaron Ohnoutka won by major over #3 Brandt. #2 Ely Olberding finished 3rd in Bennington, dropping a match to Columbus star freshman Bice. Sam Luther from Kearney Catholic really impressed at the Broken Bow Invite, pinning his way to a tournament title.

113:
The big news is that Caden Arps will be wrestling at 120 this year (126 this past weekend). Top ranked Benavides didn’t get to match up against D#1 Marshall in Mullen, as Marshall was up at 120. Schluckebier pinned his was through the Friend tournament. #5 Musser pinned #4 Hilmer in the third period in what was a close match prior to the fall. This match occurred at 120, but both should be down to 113 soon. #7 Dozler fended off freshman Lamb of Valentine 7-5 in OT on his was to a second place finish in O’Neill. Dickau of Hi-Line won his home invitational. Looks like it’ll be Goebel at 113 for Syracuse which moves #6 Bridgmon up to 120. Conestoga freshman Ethan Williams defeated Goebel in the finals of the Conestoga Classic. Also Dawson Hardesty from Conestoga lost in OT to Goebel. Perhaps either Williams or Hardesty will go to 106? Logan View’s Luis Hernandez-Jimenez is down at 113 where he’ll be near the top of the weight. Look to 12/21 for a meeting between him and Schluckebier.

120:
With Arps landing here that certainly changes the landscape of this weight. Top ranked Albrecht pinned #7 Escandon to win the Lakeview Invite. #4 Vandenberg won the Bennington Invite. #5 Garey pinned his way to a tournament title at his home invite. #8 Bruns had the good win over D#3 Smith to win at Ravenna. #2 Ancheta is likely out until sometime in January and #6 Vondra may be missing some time as well. Conestoga’s Braden Ruffner won by major over Bridgmon so he’s knocking on the door at this weight. Tekemah-Herman freshman Logan Burt won the Blair Invite at 120 and Dillon Fushia was the champ at Friend. Since Hernandez-Jimenez is at 113 look for either Mueller or Valencia to make the move to 120.

126:
Chris Williams won the O’Neill Invite in dominating fashion. #3 Faulkenberry didn’t compete opening weekend. Frank of Amherst is going to be wrestling 132 from the sounds of it. Teammate Shields beat returning D champ Shaye Wood and will be in the top group at 126. Zitek of Aquinas was runner-up at Bennington, dropping a match to A120 ranked Cerny from Columbus. #5 Zegers was up at 132 this past weekend and won the Friend Invite. He beat D132lb #1 Payne before dropping his finals match against D126 #2 Reimers of Palmer. #6 Mueller finished runner-up to B#5 Templar at the Blair Invite. #7 Carson Thompson will be up at 132 for the season and #8 Will Grape didn’t compete at the O’Neill Invite on Saturday. Nathan Patak from Wilber-Clatonia beat D#4 Schernikau on Thursday. Keaghon Chini of Conestoga recorded four pins to win his home invite.

132:
Big upset on Friday with #8 Bryce getting the win over #1 Escandon in overtime. This will inevitably shuffle something around at the top of 132. #2 Powers won his home invite. #2 @ 126 Frank cruised to a Ravenna Invite title, pinning #7 @ 126 Thompson of Wood River. Both wrestlers will remain at 132. #4 Nickolite wrestled 138, while former qualifier Noah Scott occupied 132. Scott did get a nice win on Thursday over #8 @ 126 Grape. We’ll see how Aquinas’s lineup looks this Friday at Wood River. #5 Olson was runner-up to Chamberlain, SD wrestler at O’Neill. #6 Valencia and #7 Taylor didn’t wrestle. Valencia might end up at 126 or even 120. Tommy Lokken of Wilber-Clatonia beat D#1 Payne in a dual on Thursday. #5 at 138 McNulty will be wrestling 132 this season. He was 4th at Blair on Friday. Ponca SQ Dalton Anderson won the Howells-Dodge Invite.

138:
Krolikowski pinned B#5 Thompson to win the O’Neill Invite. #2 Widener, #3 Valentine and #5 Graham all wrestled at 145 opening weekend. Valentine finished 7th at the Sidney, MT Invite. Graham pinned his way through the Lakeview Invite. Widener beat D#3 Levi Lewis and D#3 @ 126 Larson to win the Mullen Invite. We’ll see if these three stay up at 145 or not. #4 Feldner was upset by Cole from Broken Bow in the semifinals of the Broken Bow Invite. #8 Rowse beat Cole 7-3 in the finals. #7 Lade finished runner-up to D#1 Christensen at the Creighton Invite. Tri County’s Drew Garrison beat rankings contender Caleb Eggleston 9-7, scoring all of his points in the second period of that match. Bergan’s Cal Janke won a 6-4 match over Hilliard from Oakland-Craig to win at Howells-Dodge.

145:
Top-ranked McGinley won the O’Neill Invite by fall over #7 Lampman. #2 Scdoris is 7-0, all of his wins coming by fall. #3 Smydra didn’t compete as Norfolk Catholic didn’t have any opening week tournaments or duals. 4th ranked Schrad won the Bennington Invite. Freshman Ben Alberts from GICC had a nice opening weekend, knocking off #5 Perez and winning the Broken Bow Invite. #6 Harris wrestled 138 opening weekend. #8 Shiers didn’t compete. Conestoga’s Jacob Dragon won his home invite. Perhaps some of the 138’s will stay up at 145.

152:
This weight or 106 appear to be the two most wide open in Class C. #1 Pozehl, #4 Jones and #7 Menke all didn’t wrestle this weekend. #2 Eller was 3rd at Bennington. #3 Kreikemeier edged Grady Belt from Shelby-Rising City 3-0 in a battle of top sophomores to win at Lakeview. Belt edged Nuttleman from Cross County/Osceola 6-5 in the semi. Both Belt and Nuttleman should be in the rankings conversation at this weight. Gavin Zoucha of Malcolm defeated #6 Daake 7-5 to win at Broken Bow. Daake won a 2-0 match over 2018 qualifier Chasek of Mitchell prior to that. #5 Valdivia was 3rd at Blair. #8 Moldenhauer went unbeaten in dual action.

160:
Chase Olson won the O’Neill Invite over Hutmacher from Chamberlain, SD by major. We weren’t able to see #2 Halverson vs #4 Kluthe at Broken Bow as Halverson didn’t wrestle. Kluthe pinned his way through the tournament. #3 Grant Lindsley edged Ethan Mullaly from North Bend 4-3 in the semifinals at Lakeview before pinning #7 Karpov in the finals. #5 Dylan Jones pinned his way through the Conestoga Invite. #6 Josh Warren won the Mullen Invite. #8 Miller lost by major to B#1 Miller in the finals at Blair.  Word is that 2x medalist Schutz will be down to 160 soon which would mean 5 ranked wrestlers in the C4 160 district. Will someone go up or down?

170:
Dylan Vodicka finished 5th at the insanely tough Sidney, MT tournament. He beat a Montana State Champ in the 5th place match. Burton Brandt followed up his Thursday upset win over B#1 Canoyer with a tournament title at Conestoga. #3 Hinrichs from Sutton didn’t compete opening weekend as he was part of their state runner-up football team. #4 Dylan Zoucha was dominant at the Broken Bow Invite, beating #8 Rasmussen by fall and state qualifier Meyer of Ord 16-0. #5 Gunnar Battershaw appears to have suffered an injury at the O’Neill Invite, so hopefully that is just a minor deal. #6 Schutz won his home invite, and may be to 160 as soon as this weekend. #7 Kment impressed at Bennington, winning the tournament by way of a major decision in the finals. Bergan’s Koa McIntyre won 4-1 over D#7 Hegemann of Howells-Dodge.

182:
Lathan Duda solidified himself as the top wrestler at this weight with an 8-1 win over #2 Peterson. #3 Spencer Allen was 5th in Montana. #4 Eric Hoesing lost to D#3 Borgmann of Stanton. Borgmann also won an absolutely wild match over #2 @ 195 Villwok. Sounds like Villwok will remain at 182 this season. Him and Hoesing didn’t meet up. #7 Owen Snipes won in OT over #5 Knott to win his home invite. #6 Sterup beat the #6 and #8 wrestlers in Class B 170 to win the 182lb title at Lakeview. #8 Brandon Beeson dropped a one-point match to tournament champ Martin of Shenendoah, IA at Friend. Amherst’s Drew Bogard wrestled up at 195 at Ravenna.

195:
Ord’s Ethan Gabriel spent less than two minutes on the mat to win the Broken Bow Invite. Kaden Powers of Broken Bow wrestled Gabriel in the finals after pinning #6 Alexander. #2 Villwok is wrestling 182, #3 Potts didn’t wrestle for Amherst last week, #4 Schultz of Aquinas finished 3rd at 220 at Bennington and #7 Jackman didn’t wrestle as Ainsworth didn’t compete last weekend. #5 Escamilla finished 6th in Montana for David City. #8 Logan Booth impressed at Blair, finishing first in a bracket that included A#6 @ 182 Haberman. Quran Cook of Yutan had five first period pins, including one over state qualifier Siebolt, to win the Friend Invite.

220:
In what was supposed to be a barnburner weight class at Howells, #1 Peyton Cone cruised to the 220lb title. #3 Johnson of Madison didn’t compete and D#2 Throener was up at 285. #2 Wayne Moore wrestled 285 in Montana for David City, but should be down to 220 going forward. Jon Matulka of Bishop Neumann upset #4 Thonen to win the Conestoga Invite. #5 Cone finished runner-up at Blair. #6 Beaver wrestled up at 285 at O’Neill and had the pleasure of wrestling nationally ranked and Husker Football commit Nash Hutmacher from Chamberlain, SD in the finals. #7 Keifer Anderson won his home invite by fall over #8 Coley. Coley snuck by Class D rated Hargett in the semifinals 7-6.

285:
No one lasted a minute against Jerabek at the Ravenna Invite. In the finals he won over D#4 Shoemaker by 49 second fall. The Broken Bow Invite featured #2 Scheer, #4 Hoevet and #6 Nordmeyer. Scheer was upset by Bumgarner of Broken Bow, but avenged that loss for 3rd place. Nordmeyer won over Bumgarner. Hoevet pinned Nordmeyer in the finals. This will rearrange things a bit at 285. #3 Ingwersen finished 7th in Montana. #6 Simonson finished 2nd at Howells to D#2 at 220 Throener. #7 Smith from Sutton didn’t compete. #8 Escobar went unbeaten in duals. Schramm of Aquinas was runner-up at Bennington. It was Coley that wrestled for Mitchell at Broken Bow, rather than SQ Weiss.