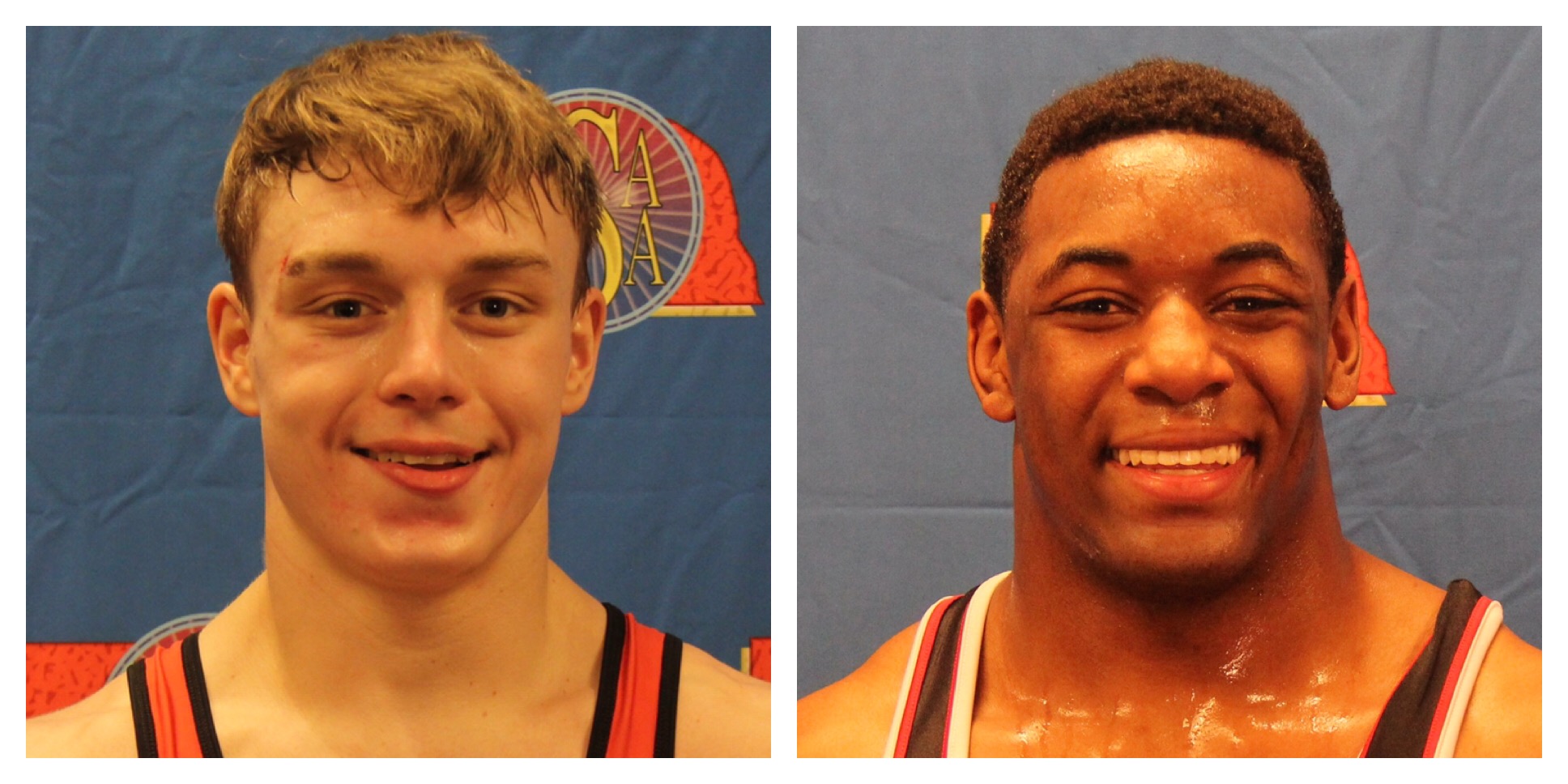 Eli finished as district runner-up to two time returning champion at this weight Logan Russell. His road to the state finals was not an easy one. He beat the eventual sixth place finisher Dickau of Elwood in round one. In his quarterfinal match, he won 7-0 over previously unbeaten Foster from Sutherland. In the semifinals he beat third ranked Sauceda, who went on to finish third. In the championship finals with the match tied against Russell, Lanham was able to secure two nearfall points late in the match to pull off the upset and claim his first state title!

Caden Arps became the first and only freshman state champion in class D this year for the Bergan Knights. During the season, there were some rumors that Arps was headed to 106, but he remained at 113. His only regular season losses were to an Iowa state runner-up, class C113 State champion Williams, and class A medalist Cerny. He had an exciting semifinal match against fellow standout freshman Scout Ashburn of Plainview, winning a 4-2 overtime match in their third meeting of the year. In the finals, Arps came out a 6-1 victor over Neligh-Oakdale senior Cameron Wilkinson. It appears as if the Knights will be headed to class C next season, where Arps will look to continue his run for four state titles.

Central Valley’s Shaye Wood emerged from what was arguably the deepest weight in class D this year. To illustrate just how difficult this weight is, three wrestlers who handed Wood losses on the season didn’t make the medal stand. Wood entered the state tournament ranked sixth. In the quarterfinals he pinned second ranked and returning state runner-up Ellis from Winside. He edged Brady’s Jeremy Larson 2-1 in the semifinals before knocking off returning state champion Zach Hamilton 9-3 in the finals, capping an incredible run to the top of the podium.

Christensen made the drop to 126 at the end of January. His only losses on the season were at 132 lbs. In the district finals, he solidified himself as the top guy at this weight with a 5-2 win over Frank of Amherst, who had beaten the other top challengers at D126. In the state semifinals, he beat third ranked Reimers of Palmer 6-2. The state finals match was a repeat of the district final match against Frank. This time the match was closer as Christensen needed late points to edge Frank 6-5. His win gave Plainview their second state champion in addition to the team title.

Pawloski ended an incredible high school career with his fourth state title. He got a late start on the season after sustaining an ACL injury over the summer. In his second weekend after returning to action, Pawloski had his first of three meetings with eventual finals opponent Herley from Neligh-Oakdale. Pawloski recovered after being down 5-0 at one point to get the fall in the third period. The second meeting between the two occured in the district finals with Pawloski winning 6-3. In the state finals, Herley took a brief 3-2 lead in the second period before Pawloski notched two takedowns and two nearfall points and eventually won 9-5.

Burwell’s Joel Ostrom ended his senior season with his first state title and an undefeated record. His sophomore year he was runner-up and he finished third as a junior. Ostrom fought through injuries this year, and didn’t wrestle in the district finals. His road to his first state title then had to go through Mullen’s Jade Lovitt, who knocked Ostrom off at last year’s state tournament. Ostrom won that match 4-0 and moved into the finals with a 9-1 major decision in the semis. His finals match against Central Valley’s Enrique Martinez was expected to be a close one, as the two went into overtime earlier this season. Ostrom left no doubt this time though, as he scored a first period fall to win his first state title.

Johnson became the first of three state champions for the Bergan Knights, with his 3-1 state finals win over Plainview freshman Will Gunning. Gunning pulled the upset in the semifinals over previously unbeaten Riggs from Maxwell. Johnson was a four-time state qualifier and a medalist at 132 in 2017. His only losses on the season were either up at 152 or to Class C and B state medalists. He ended his finals match putting his shoes in the center of the mat, signifying the end of his wrestling career.

After not placing last year at 145lbs, it didn’t take White long before vaulting up near the top of the Class D rankings with his December win over returning state champion Austin Garcia of Morrill. The next two matches between the two went in Garcia’s favor including a 2-1 match in the district finals. White’s closest match heading into the finals was an 8-1 quarterfinal win. On the top side of the bracket, returning 145lb finalist Colby Coons from Twin Loup knocked off Garcia. White had a close win over Coons earlier in the season, and backed that win up with an 8-3 win in the finals.

Simants became the first state champion in program history for Stapleton. His only two regular season losses were to Austin Garcia of Morrill who dropped to 152. At the state tournament, he picked up two falls in the early rounds and in the semifinals notched a 9-5 win over Polen from North Central. In the finals, he squared off against returning 145lb champion Josh McFarland. The two met early in the season at the Osceola Invite, with Simants winning 14-4. In the finals trailing 3-0 to McFarland, Simants hit a lateral drop and was able to secure the fall and capture the state title.

Our D170 pound champion Noah Scott had to overcome multiple injuries before reaching the top of the medal stand. As a sophomore Scott was beat out of the state tournament by Bryce Zimmerer, which was Zimmerer’s fourth win over Scott that year. Junior year, Scott suffered a torn ACL, MCL and meniscus and was unable to compete. Oddly enough, Zimmerer sustained and injury that year as well and didn’t compete. Scott suffered another football related injury this year, but was able to make a return to the mat. At the state tournament this year, Scott dominated his first three matches, collecting two falls and a 16-2 win in the semifinals. This led to a finals matchup against familiar foe Zimmerer. They wrestled a total of six times this season alone. Scott won in the state finals by fall. A great comeback story and a great rivalry.

Baptista tried to make a late season drop to 170 pounds, but as he got closer he decided that he felt more comfortable at the higher weight. He went back up to 182 where he only lost 1 match to a class D opponent this season. His other losses came at the hands of the eventual Class C State Champion at 182 Joseph Reimers of Aquinas, Class C fourth place finisher in Class C at 195 Matthew Feldner of Kearney Catholic and Class B State Qualifier Kole Bordovsky of Wahoo. At the state tournament, Baptista used a fall in the opening round and a major decision in the quarterfinals to reach the semifinals. In the semifinals, he squared off against second ranked Dylan Horejsi of Howells-Dodge where he used three takedowns and 2 reversals to secure a 10-5 victory. In the finals, Baptista used a takedown with 15 seconds left to defeat top ranked Corey Dawe of Burwell.

Sixth place last year at D160, top ranked Karsen Hunter of Bayard was dominant on his way to the Class D 195 pound title. Hunter pinned all four opponents at the state tournament and only entered the second period once! Three of Hunter’s five losses this season came to the hands of the eventual Class C 195 pound State Champion Beau Wood of Perkins County. The other two losses were to out of state opponents.

Peyton Cone was a qualifier last year at D195. He wrestled several offseason tournaments and his offseason efforts showed early in the season, as he was vastly improved. Cone came into the state tournament ranked 3rd at 220 pounds, but was really second after top ranked Schuyler Brown of Overton didn’t compete at districts. Cone survived a scare in the quarterfinals where he earned an escape with 18 seconds left to defeat Ethan Williams of Laurel-Concord-Ridge. In the finals, he defeated Carter Threoner of Howells Dodge 11-6 with the help of three 3rd period takedowns. Cone was one of three state title winners for the class D runner-up team, the Bergan Knights.

After wrestling JV last year, Martin flew under the radar most of the year before breaking into the rankings late in the season. By the state tournament, he was in full stride as he became the first state champion in program history for Overton High School. He earned 3 falls to reach the state finals. In the finals, he secured a takedown in overtime to defeat Marcus Cave of Weeping Water. Cave defeated top ranked and undefeated Jakob Jerabek of Arcadia Loup City by fall in the semifinals. The top three finishers at this weight all return next season.